Asking: ‘What does a person need?’ 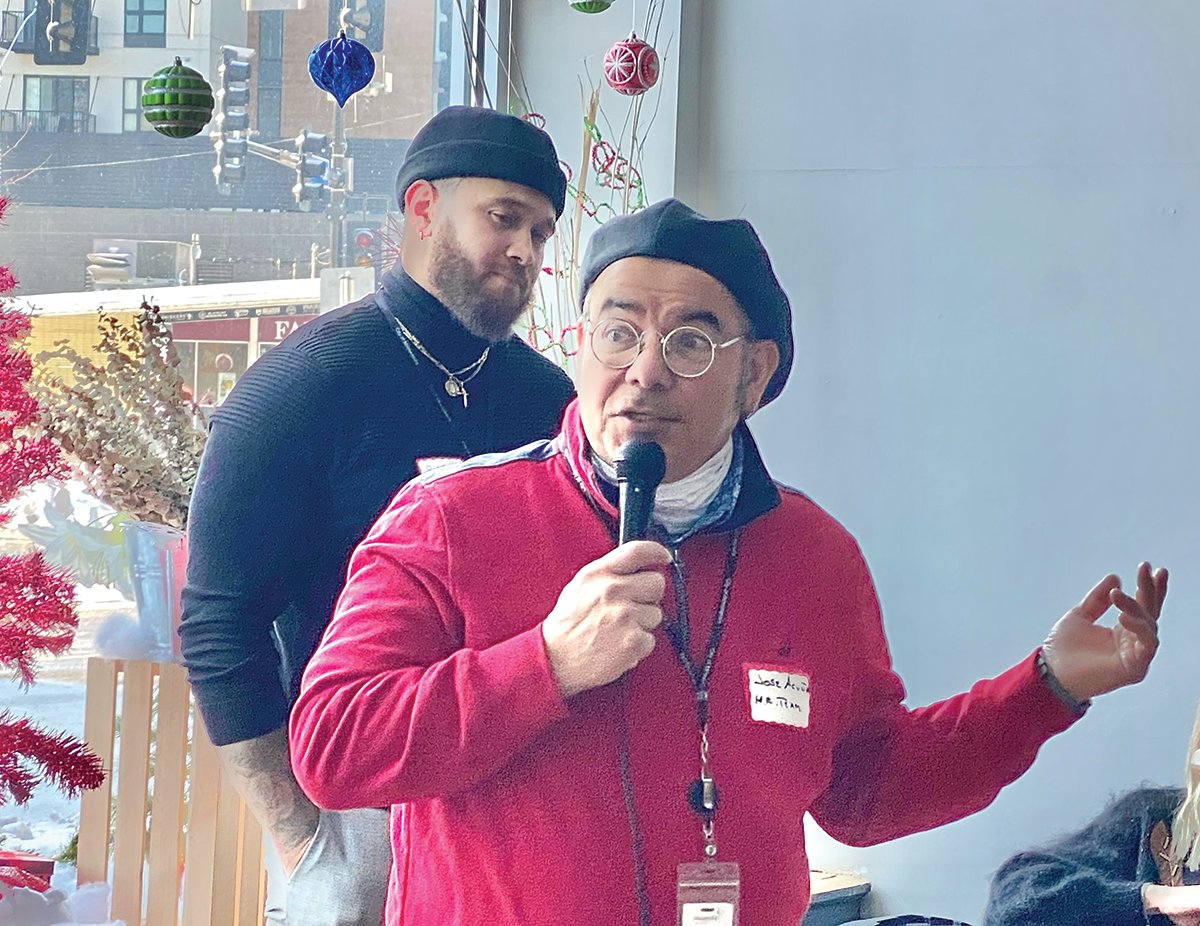 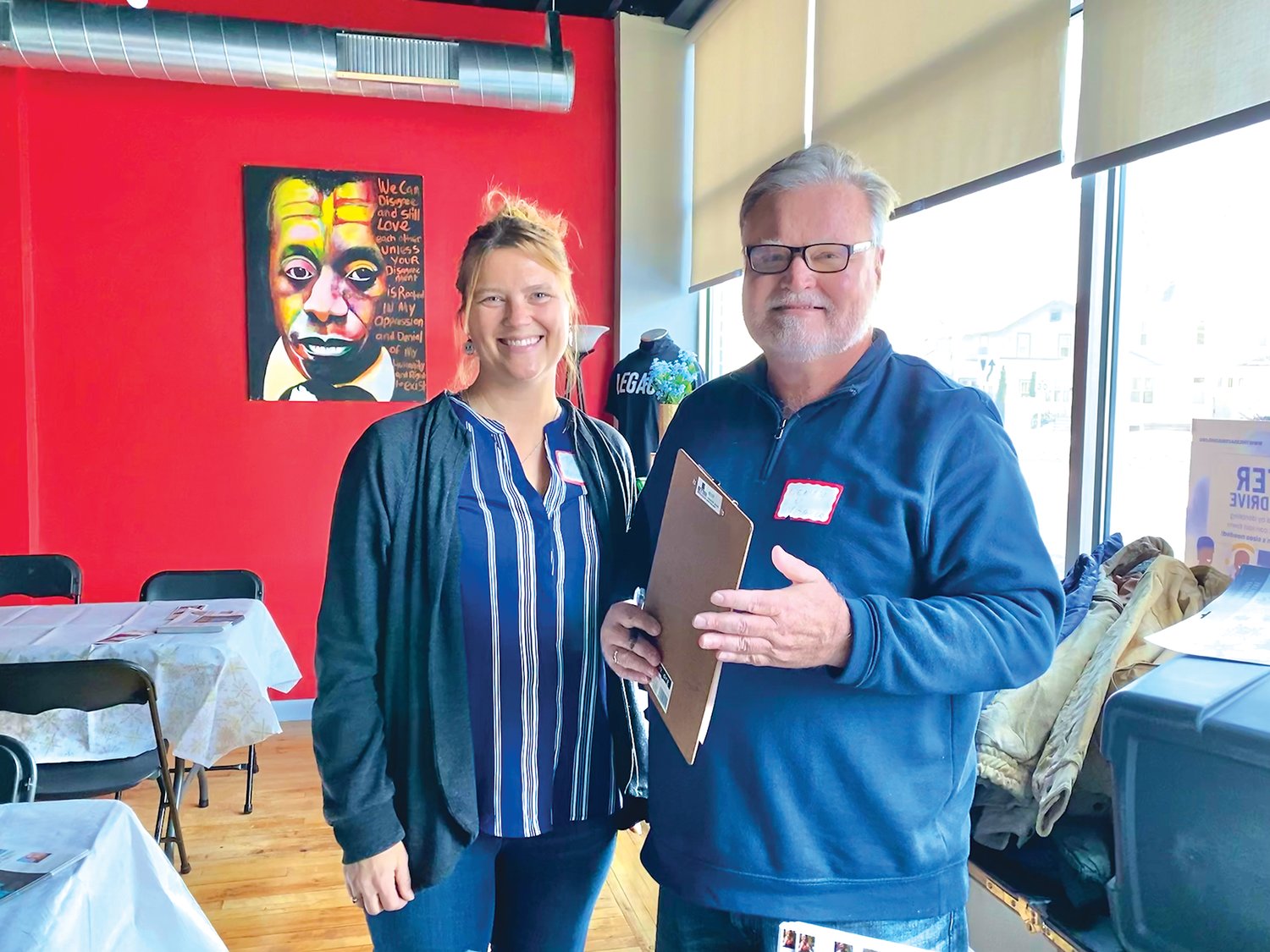 Tesha M. Christensen (left) and Denis Woulfe of the Longfellow Nokomis Messenger check in attendees at the Dec. 8 LBA luncheon at the Legacy Building as the LBA returns to in person events after a hiatus during the pandemic. Woulfe has been on the LBA board since 2019.
Previous Next
Posted Thursday, December 22, 2022 1:06 pm
By Tesha M. Christensen

Where can businesses turn to when homeless individuals pitch a tent in their parking lots, they’re finding trash and syringes, or someone is sleeping on their steps?
Two members of the Minneapolis Homeless Response Team (HRT) shared information about what they do during the Longfellow Business Association lunch at the Legacy Building on Wednesday, Dec. 7, 2022.
When HRT staff respond to a call, the first thing they do is an assessment. They ask who is there, how many people are there, and what their situation is. “One of the main things is to build relationships,” said Jose Acuña. They recognize that for the individual who is homeless, when they step near their shelter it is like stepping into their house.
“Every situation is different,” observed Acuña.
The Minneapolis HRT is not a direct service provider, but instead work revolves around connecting unsheltered individuals to the services and resources provided by Hennepin County and community partners.
“We get a lot of calls – hey, we need more housing. But the reality is that there is not a one-size-fits-all,” stated Bobby Morrow.
Some people need an ID. Others are dealing with barriers that may include chemical dependency and mental health issues. They might need specific assistance that is culturally relevant.
HRT staff ask if the unsheltered person would like help finding a shelter, and will facilitate that if desired. Some don’t know how to live inside.
“So many people are being burned by systems and they don’t trust,” said Acuña. “We understand that.” While Acuna and Morrow made a point of acknowledging that they often were not welcomed by inhabitants at homeless encampments, they worked hard to earn peoples trust as folks realized that they could offer them valuable supplies to keep them warm and nourished.
HRT staff are with regulatory services, but don’t have the authority to shut down encampments, stressed Morrow. They collaborate with public works regarding safety concerns and whether a private or public property is involved. If an encampment is to be closed, they work with the residents beforehand, said Morrow.
Occasionally, there is an immediate closure, such as what happened recently under a bridge near the river by the University of Minnesota because of a fire.
As the weather gets colder, the use of propane heaters in tents is becoming more of a problem as they can cause fires.
Most of the unsheltered people in the city are individuals, and there are not many families with children.

311 calls
According to Acuña, much of their work is centered around educating the community. “A lot of times people just want the homeless individuals off their property,” he said. They work to explain the nuances of their work, and their focus on providing services. They do a lot of welfare checks.
Once, they checked in on a tent, and learned that all of the occupant’s stuff had been stolen. Even their shoes. So, they were having trouble getting out and around.
HRT accepts donations and brings supplies such as gloves and hats.
“We have a lot of people with mental illnesses,” pointed out Acuña.
If they respond to a 311 call that a homeless individual is scaring away customers from a business, HRT staff might encourage the person to move along from the space.
Lately, they are receiving more calls about individuals staying in cars and RVs, as well as abandoned houses. “Unfortunately, a lot of people are in need of something,” said Acuña. “This is what we are trying to figure out. What does a person need?”
The HRT used to be under the city’s department of health but is now part of regulatory services. Morrow and Acuña are among the three homeless response coordinators and there is one manager.
To reach HRT staff, email mplshomeless@mpls.mn.gov.