Celebrate Minnesota as the Peacebuilding power state for all 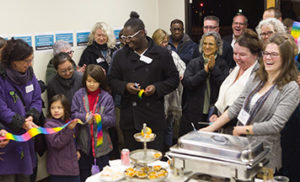 Community members and leaders had two reasons to celebrate with Donna Minter, her staff, board, and volunteers last month. The organization Minter started 10 years ago recently won a U.S. Peacebuilding Award for Excellence from the Alliance for Peacebuilding, a Washington D.C.-based international organization. And, after many years of operating out of a storage closet, Minnesota Peacebuilding Leadership Institute finally has a brick and mortar office space. (Photo by Margie O’Loughlin)[/caption]

A local award celebration was held on Nov. 1, 2019, at the new Peacebuilding office (their first), located at 5200 47th Ave.S. In her comments, Minter said, “Isn’t it only appropriate that an organization whose name is ‘Peacebuilding’ should finally have a building?

“We are known for being an institute without walls, one that delivers most of its trainings out in the community – but it’s great to finally have some walls!”

Tonja Honsey, Peacebuilding board member, incarceration survivor, and member of the Anishinaabe people, opened the celebration with a ceremonial sage smudging. Minter explained that the office space had been a storehouse for ammunition before Peacebuilding moved in, and she welcomed it being cleansed and blessed.

Hennepin County Commissioner Angela Conley included some sobering statistics among her personal comments. “Hennepin County,” she said, “has between 25,000-30,000 people involved in the criminal justice system, the seventh highest number in the country. The work that you’re doing at Peacebuilding should be embedded in the Hennepin County workplace.”

Since 2010, Peacebuilding has trained 3,000+ Minnesotans to be more resilient, trauma-informed, and focused on restorative justice. The goal of the signature Peacebuilding training, Strategies for Trauma Awareness and Resilience – the STAR Training, is to learn how to transform psychological trauma into non-violent power.

Minneapolis community organizer Tommy McBrayer completed the one-day version (called the STAR-Lite Training) earlier this year. He said, “The training helped me learn to identify different types of trauma. Now I’m passing some of what I learned on to the people I serve in my job in the Central neighborhood. It helps them to develop resiliency, and gives them some options other than revenge.”

St. Paul City Council member Mitra Jalali Nelson talked about moving to the Twin Cities after working for years as a middle school teacher in post-Hurricane Katrina New Orleans. She said, “I started asking right away, who was doing healing circles in this community? Who was doing work with peacebuilding? I found Donna and her organization quite quickly. We need to be investing in programs like this one.” 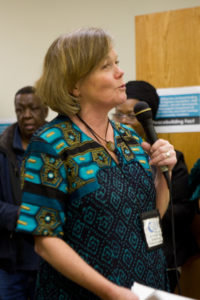 The STAR Training was created at the Center for Justice and Peacebuilding in Virginia. A New York City non-profit requested the training in the aftermath of 911, and provided a $2,000,000 grant to support its development. Minter, who is a neuropsychologist and forensic psychologist, took the STAR Training to add to her skill set. She was so impressed that she decided to bring the five-day training back to Minnesota to share with her community here, and it’s still going strong.

Peacebuilding has also sponsored Luna Fest for the past six years, a traveling film festival of award-winning short films by, for, and about women. Luna Fest raises money to support Peacebuilding’s racial and economic equity trainee scholarships: to ensure that all who want to attend Peacebuilding’s trainings are able to do so regardless of financial limitations. Luna Fest 2020 is scheduled for Wednesday, April 29 at the Riverview Theatre.

and gives them options