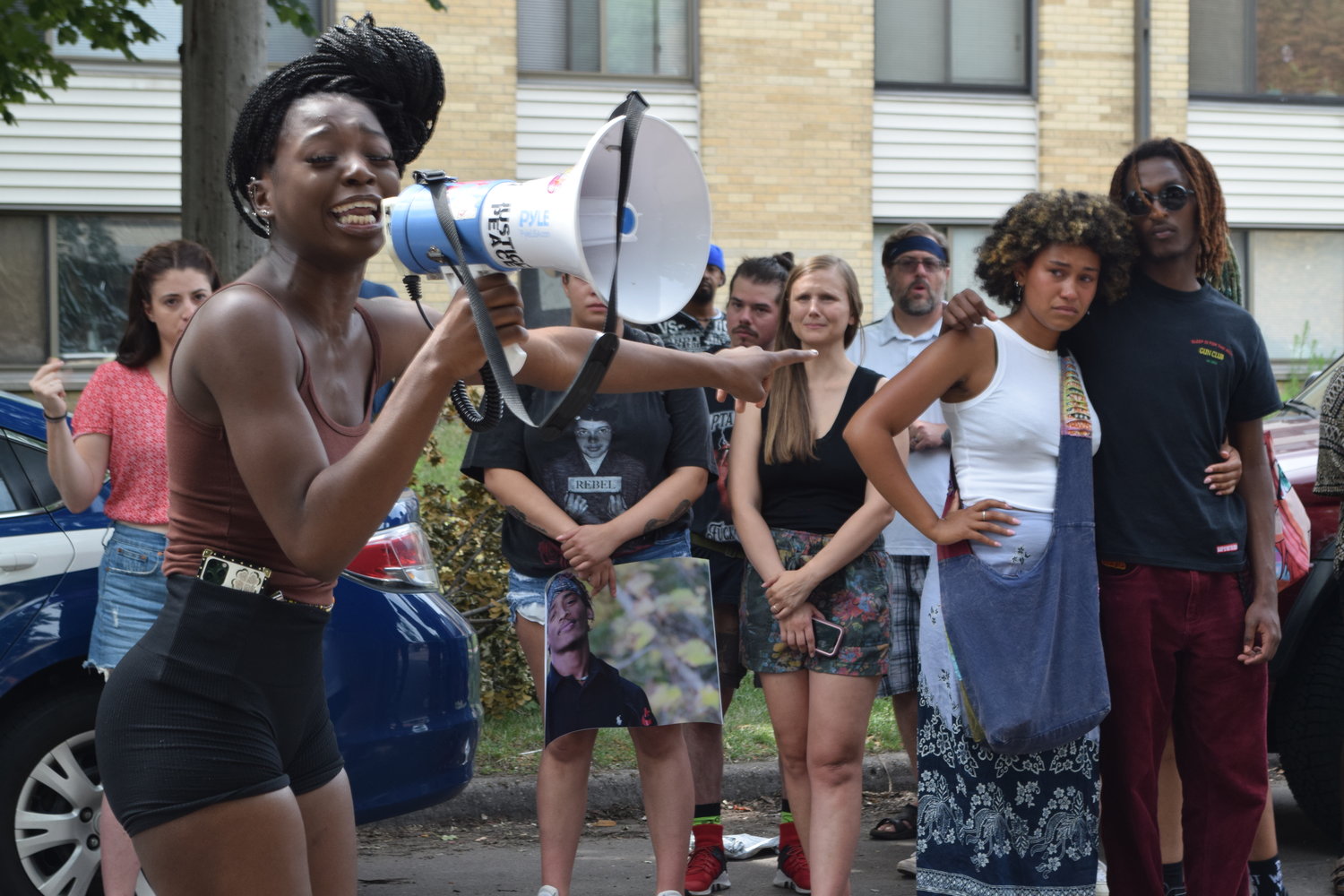 Markeanna Dionne, a former classmate of Sundberg’s at Roosevelt High School, led a chant to say his name, “Tekle” on July 16, 2022. (Photo by Jill Boogren) 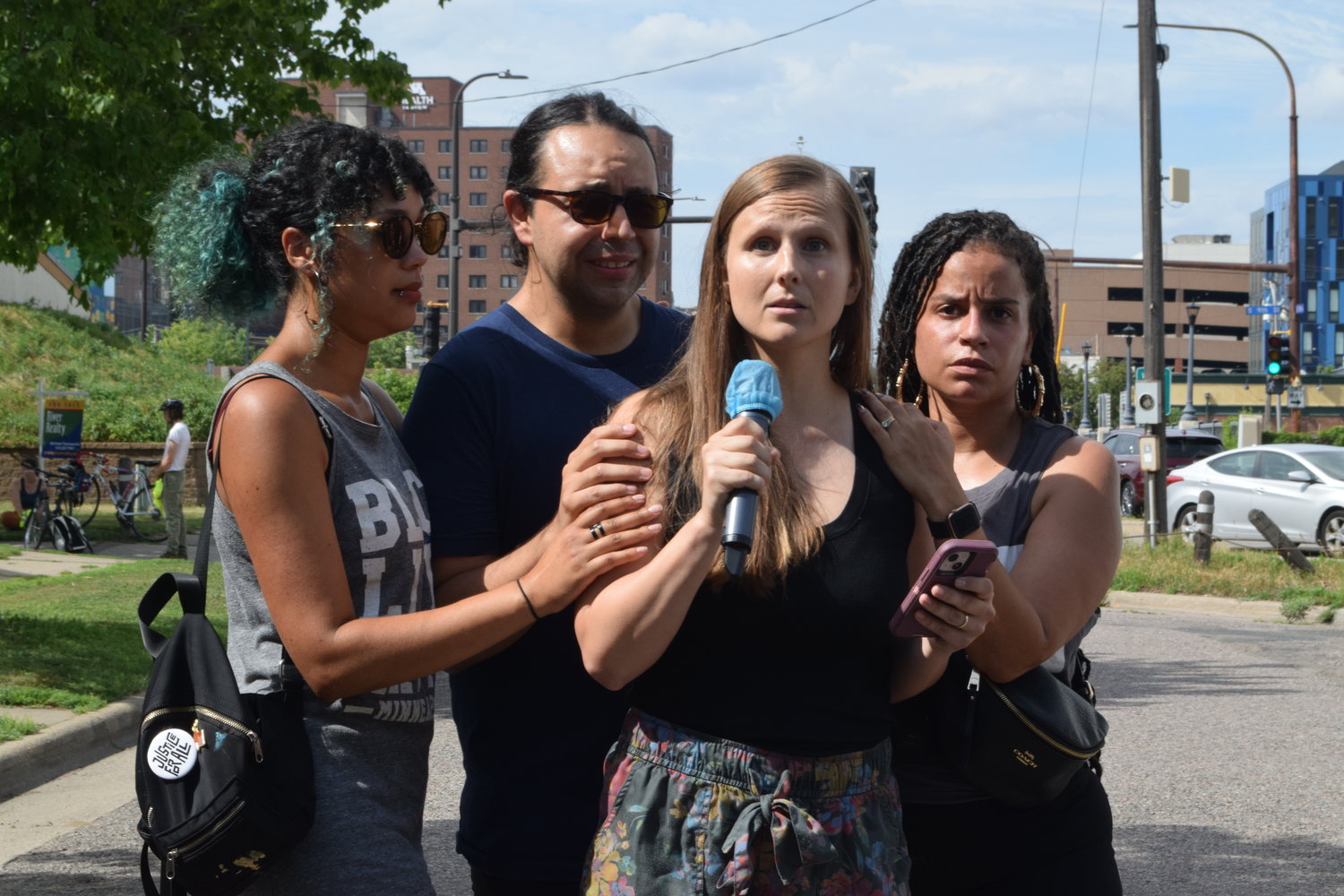 Tekle’s sister Kelsey Romero speaks during an event to honor him on Saturday, July 16, 2022, two days after he was shot by snipers. A social worker, Romero said, "Don't tell us you had no other choice. Don't tell us you need more training. We've seen you take people into custody safely." (Photo by Jill Boogren) 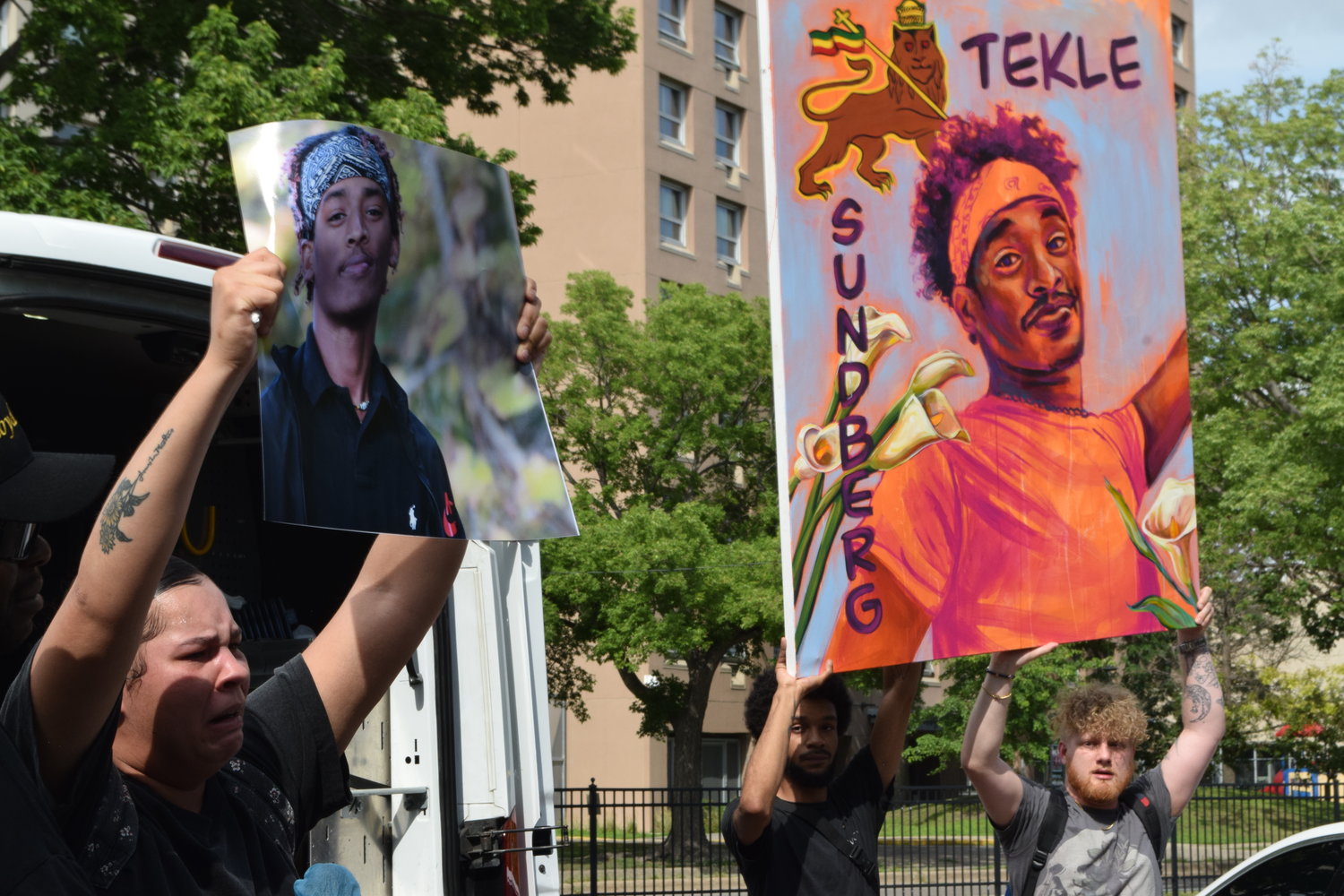 One of Tekle’s sisters holds up a picture of him as supporters raise a large portrait near the Seward apartment building where he was shot and killed by MPD. (Photo by Jill Boogren) 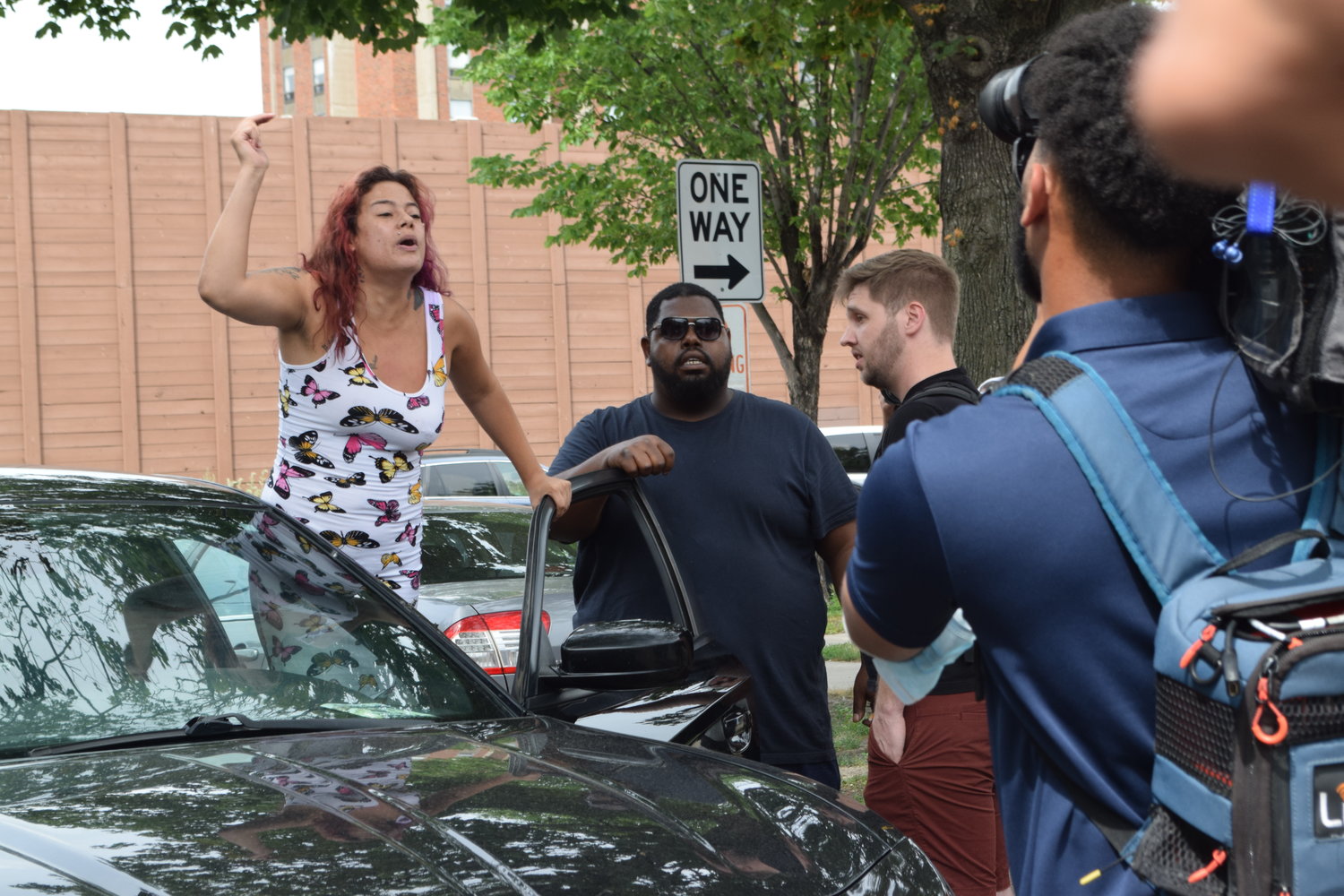 Arabella Foss-Yarbrough, who reported that bullets had been shot into her apartment, expresses her anger to the crowd. (Photo by Jill Boogren)
Previous Next
Posted Tuesday, August 2, 2022 10:40 pm
By JILL BOOGREN

Grief fell heavy as family, friends and supporters gathered on the 900 block of 21st Ave. in the Seward neighborhood on July 16, 2022, two days after Minneapolis Police officers killed Andrew Tekle Sundberg while he was experiencing a mental health crisis.
Police went to the apartment building after a resident called 911 reporting that bullets had been shot into her apartment while she was inside with her children at 9:30 p.m. Officers evacuated them and other residents from the building. They then engaged in a six-hour standoff before Sundberg was fatally shot by snipers positioned across the street at 4:30 a.m. The officers were identified as Aaron Pearson and Zachary Seraphine.
The woman who called 911, Arabella Foss-Yarbrough, arrived on the block as the gathering got underway.
“Why do I have to risk my life ‘cause he couldn’t get that proper help”? she yelled toward the crowd from her vehicle. “It’s not okay. I’m sorry I’m upset and I’m sorry it had to come this way, and the fact that I’m even apologizing for this shows you that I’m hurtin’ all around.”
Organizers acknowledged her pain and called on the crowd to extend their support to her, as well.
“This is a very traumatizing situation for everybody involved,” said Trahern Crews of Black Lives Matter Minnesota. “We gotta love and support one another. That’s not just a slogan, it’s for real. And we gotta support her. She deserves support. She deserves love and her children deserve love.”
Demonstrators moved down the block, away from the entrance to the apartment building. Markeanna Dionne, a former classmate of Sundberg’s at Roosevelt High School, led a chant to say his name, “Tekle.”
“I went to school with the boy. He was a sweet soul, bro, he was a sweet soul. He should still be here,” she said. “Having a mental health issue should not result into you being killed.”
A family friend (who asked not to be named) said she’d known Sundberg since he was four years old. She addressed her first comments directly to Yarbrough.
“I am so sorry that this happened to you and your babies. Nobody’s trying to take that away from you,” she said. She urged people to not make this about one side over the other and asked them to support a GoFundMe for Foss-Yarbrough and her kids to relocate.
She spoke of Sundberg’s large family of both biological and adopted brothers and sisters that love him. ”This is a beautiful southside Minneapolis family,” she said.
After a brief march, some of Sundberg’s sisters and brothers spoke.
“His life was precious. His life was sacred. His life mattered. He was deeply loved,” said his sister, Kelsey Romero. “I need you all to know that he was deeply, deeply loved.”
“He was all about that plant life. He was all about that positivity. We all are,” said Sundberg’s older brother. “That’s what we are. The Sundbergs. We’re positive.”

MANY QUESTIONS
There are still many questions as to what went wrong that led to Sundberg’s death. Sundberg’s parents had been called to the scene, but they reject the implication that this meant they were in collaboration with negotiators. Despite pleading with officers, Mark Sundberg was not allowed to go in and speak with his son. According to Romero, officers also told them repeatedly, “We will not shoot him,” but had positioned snipers on the roof.
“My parents were invited to the scene to helplessly, helplessly witness their son executed,” she said.
Many asked why police in Faribault, Minn., who themselves were involved in a six-hour standoff on the very same day, were able to apprehend the person alive. There, Juan Jose Zamarripa Almeda allegedly broke a window and yelled “Shoot me.” He then pointed a gun at officers. He allegedly had also pointed a gun at two men walking outside beforehand. Police there used less-lethal munitions to end the standoff, and brought him into custody alive.
“Don’t tell us you had no other choice. Don’t tell us you need more training,” said Romero. “We’ve seen you take people into custody safely. You know how to do it.”
Activists also stressed that Sundberg was a Black man and, as such, was likely subjected to different treatment than a White person would be under similar circumstances. (This is corroborated by the Minnesota Department of Human Rights findings of race-based policing in Minneapolis). Dylann Roof and Kyle Rittenhouse were among names mentioned of White-bodied people who had actually killed other people but were apprehended alive.
A request for information on whether less-lethal munitions were available and used and whether a Behavioral Crisis Response team or other mental health crisis experts were on hand has not been answered by MPD.
“A mental health crisis should not be a death sentence It should not give cops permission to perform an execution,” said Romero. A social worker herself, she spoke of dealing with mental health crises on a regular basis, without any weapons and without a SWAT team. “We’re trained to deescalate.”
Officers Pearson and Seraphine were part of the SWAT team that executed the no-knock raid that led to Amir Locke’s killing by police in February 2022. Between the two of them, they have racked up a dozen complaints. According to MPD internal review records, every complaint marked closed shows no disciplinary action taken.
In a July 16 statement, Attorneys Ben Crump and Jeff Storms, who are representing the family, called on MPD to provide video evidence and other information “as to why Tekle, who officers had isolated for hours, suddenly needed to be executed.” On July 20, a 14-minute video containing some body camera footage from the first and last parts of the night was released and concludes with this message:
“At this point, a video with a clear depiction of the activities occurring at approximately 4:18 a.m. at 904 21st Ave. S. has not been identified by MPD.” The MPD asked anyone with video from the scene to contact the Minnesota Bureau of Criminal Apprehension, who is investigating the incident.
"That video and [accompanying press conference] was a sham. They did not answer a single question. They only added more questions for us today. That was not transparency,” said Jaylani Hussein of CAIR-MN at a July 21 press conference. “They told us they don't know what happened. We know what happened. They killed that young man.”
Tekle’s parents Mark and Cindy Sundberg, in a statement delivered by their attorneys, described Tekle as a son, brother, grandson, uncle, nephew and friend. “He was smart, loving, funny, and kind. He had artistic talents, including photography and painting. Tekle was a deep, soulful, critical thinker who drew strength and energy from being outside and gazing across the river. He never missed a good sunset,“ it reads. “We send our deepest sympathies to anyone in his building impacted by his crisis, and we thank the community members who have come forward in loving memory of Tekle.”