Jocelyn Sanchez attended her first acting class less than a year ago. Since then, she’s signed with five talent agencies and been cast in 16 short films, commercials, and TV pilots. 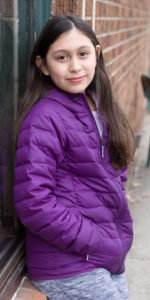 Photo right: Actress Jocelyn Sanchez said, “I’ve fallen in love with acting. I love being in front of the camera, and the adrenaline that comes with it. I’m naturally good at memorization. I memorize the lines I’m given, and then I talk to my mom about how I think the character is feeling.” (Photo by Margie O’Loughlin)

Her original script, called “Lost and Found” was recently accepted by the 50 Fifty Reel Challenge, an international short film competition and festival for kids. To jump-start the filming process, Jocelyn ran a successful GoFundMe Campaign and reached her goal of $1,000. She posted her casting notice on TC Cinematics, and 50+ actors submitted their headshots and resumes. She eventually had a cast and crew of more than 60 people who volunteered their time and talent to be part of her film. Jocelyn oversaw a four-day shoot at four different locations. She made shot lists for 21 scenes, assisted with editing, co-directed and starred in the film. She came up with her production company name and designed her logo.

Talking about her whirlwind year, Sanchez said, “When I told my mom I wanted to give acting a try, she took me seriously. I started as an ‘extra,’ when you’re on film but you don’t have any lines. I didn’t feel very confident in the beginning, to be honest.”

Sanchez has grown in both experience and confidence in a very short time. “I think that my background in karate has helped me,” she said. “I’ve earned a brown belt at Kitsune Karate, which is also in the East Nokomis neighborhood. Karate has taught me a lot of self-discipline—when to use my strength, and when to back off. I’ve been trained to listen carefully to my sensei (teacher) and now, in the same way, I listen to my directors.”

Sanchez has been writing stories since she was old enough to write, and the chance to enter the film festival was a dream come true for her. “You have to choose a genre to enter the film competition,” Sanchez said. “The film I made is in the genre of sadness/friendship. It’s about two sisters who lose their parents in a car crash. They’re sent to live with a relative who decides to separate them, raising one herself and sending the other into foster care.” Sanchez plays the part of the older sister, and her real-life sister Maya plays the part of the younger one. The film will be shown on the big screen at the New Hope Cinema Grill Aug. 8, 2019.

The Sanchez family has lived in East Nokomis since 2006. Jocelyn attends the International Spanish Language Academy, a charter elementary school located in Hopkins, where she is in 5th grade.

“Sometimes I wonder how my life will look in five years if I stay with acting,” Sanchez said. “What will I be like? How will I change? Will I end up living in Los Angeles, or in Atlanta—now the second largest market in the US for commercials, television, and film. I wouldn’t have been able to do any of this without the support of my family, my directors, and my friends. Everyone has been so supportive. I’ve been very lucky.”