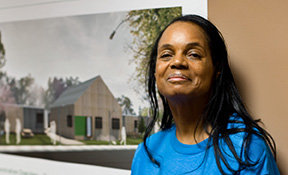 Sherry Shannon is one of five formerly homeless community members leading the Envision Community. Behind her is an architectural drawing of the project. (Photo by Margie O’Loughlin)[/caption]

Dewayne Parker became homeless in 2017. For lack of a better option, he ended up sleeping for months on the Green Line train. One winter night, that sleeping arrangement very nearly got him killed.

Parker said, ”Everybody knows it’s dangerous living on the streets. What I want the broader community to understand is that anyone can end up homeless. Some of the most intelligent and resourceful people I’ve ever met lost their housing. It doesn’t take much for things to fall apart.”

Parker is one of five homeless or previously homeless community members serving as leaders on a new housing model called Envision Community. After meeting for more than a year, the group has embraced the idea of starting a community of “tiny homes” for the poor and homeless to be built somewhere in South Minneapolis.

"There’s a terrible housing shortage, but that’s just part of it.

The headline, and one of the things that’s really different with our model, is that we’re creating an intentional community – one where residents feel a sense of belonging. This movement has to be led by people who have experienced homelessness, and we have to be certain that

what we’re building is desirable for those same people.”

Envision Community is a proposal to build and operate a two-year live demonstration of an intentional community made up of 15-30 people living in tiny homes, with the goal of creating health equity.

The tiny homes, just a few hundred square feet each, would be deeply affordable – appealing to the growing number of low-income people shut out of the metro area’s housing market. They would be part of a cluster development centered around a larger, shared community house for meals and other gatherings.

What does it mean to be shut out of the housing market? For starters, many people with low-wage jobs simply can’t afford the high cost of rent in the Twin Cities. Other barriers to housing are having a criminal record, a poor credit score, a past eviction, or a chemical dependency problem. Landlords can easily avoid renting to someone with any one of the above.

The Minneapolis City Council unanimously approved an intentional community cluster development ordinance last November. This allows for a new type of affordable housing for people transitioning out of homelessness. A collaborative made up of representatives from 17 different organizations, and led by members of the Twin Cities homeless community, are working together to plan what the Envision Community will be.

When there is nowhere else to go, people without a safety net may quickly end up living on the street.

Sherry Shannon did. Born and raised in South Minneapolis, she first became homeless while working full-time and single-parenting two children. It was a long road from homelessness, to living in a shelter, to transitional housing, to the apartment where she now lives in Roseville.

Shannon is also an Envision community leader; she is candid about her struggles, which include a PTSD diagnosis, and her successes. She said, “Once I got into stable housing, I could finally start working on my disability. Things came together pretty quickly then. I started talking about my situation, and trying to help other people move forward too. Last year, I won the Dorothy Richardson Award for community leadership.

“After I gave my acceptance speech in Chicago, a couple of ladies came up to me and asked, ‘How did you ever get through all this?’” I told them, ‘I couldn’t have done it without a place to call home.’”

The Envision Community, if approved by the city of Minneapolis, would be the first community of tiny homes in the Twin Cities Metro.

Another first would be forming a strong collaboration with the health care system. Doctors also desire innovative housing models after seeing how often homeless patients turn up at hospitals with complicated, costly medical problems – many of them caused by being homeless.

Dr. William Walsh believes that homelessness is a public health crisis. A reconstructive surgeon at Hennepin Health Care and a researcher at the University of Minnesota, he serves as advisor to the Envision Community team. Dr. Walsh said, “Homelessness profoundly affects a person’s health, and puts enormous strain on the health care system.”

He added, “There are moral and financial motivations for the health care system to get involved in ending homelessness, but with the current failure of affordable housing – we can’t fix it. What’s needed is an innovative new model like Envision. We can bring housing costs down without compromising the quality of life for people moving into our housing model. With a strong emphasis on building community, as well as building homes, the quality of life of life for our residents will go up.”

The Pohlad Foundation funded the construction of a pilot tiny house for Envision. It will be set up in the parking lot of Elim Church in Northeast Minneapolis later this summer. Additional funding for Envision Community has come through the Family Housing Fund and the McKnight Foundation.

Two adjacent city lots will be needed to build the project on, with easy access to public transportation and walkable amenities. The property has not yet been found.

If you want people to listen, you have to speak up

Rome Darring is also a community leader on the project. When he first got involved with Envision, he found it hard to share his story of being homeless. He said, “I’ve gone through a lot of changes since this started. As an advocate for the homeless, I was at the State Capitol today participating in a press conference. I was so nervous about it that I couldn’t sleep at all the night before. But I’ve learned that if you want people to listen, you have to be willing to speak – so I made myself stand up and do it.”

Visit the Envision Community website at www.hennepinhealthcare.org/envision-community/ for more information.