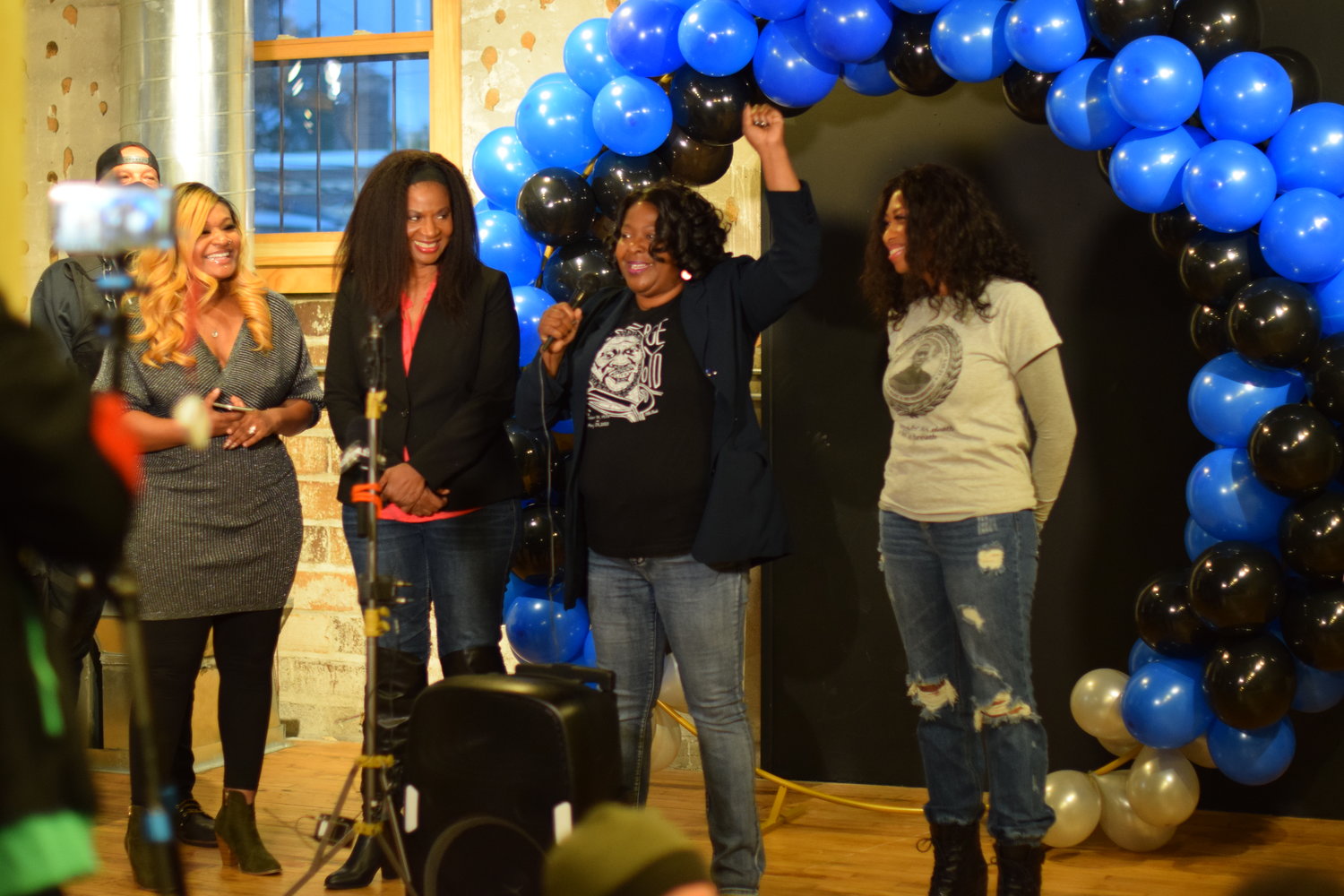 Toshira Garraway of Families Supporting Families Against Police Violence, shares a joyful moment with George “Perry” Floyd’s aunt Angela Harrelson, his aunt Mahalia Jones (holding microphone), and his cousin Paris Stevens at a celebration of Perry’s life on Oct. 14, 2022, on what would have been his 49th birthday. (Photo by Jill Boogren) 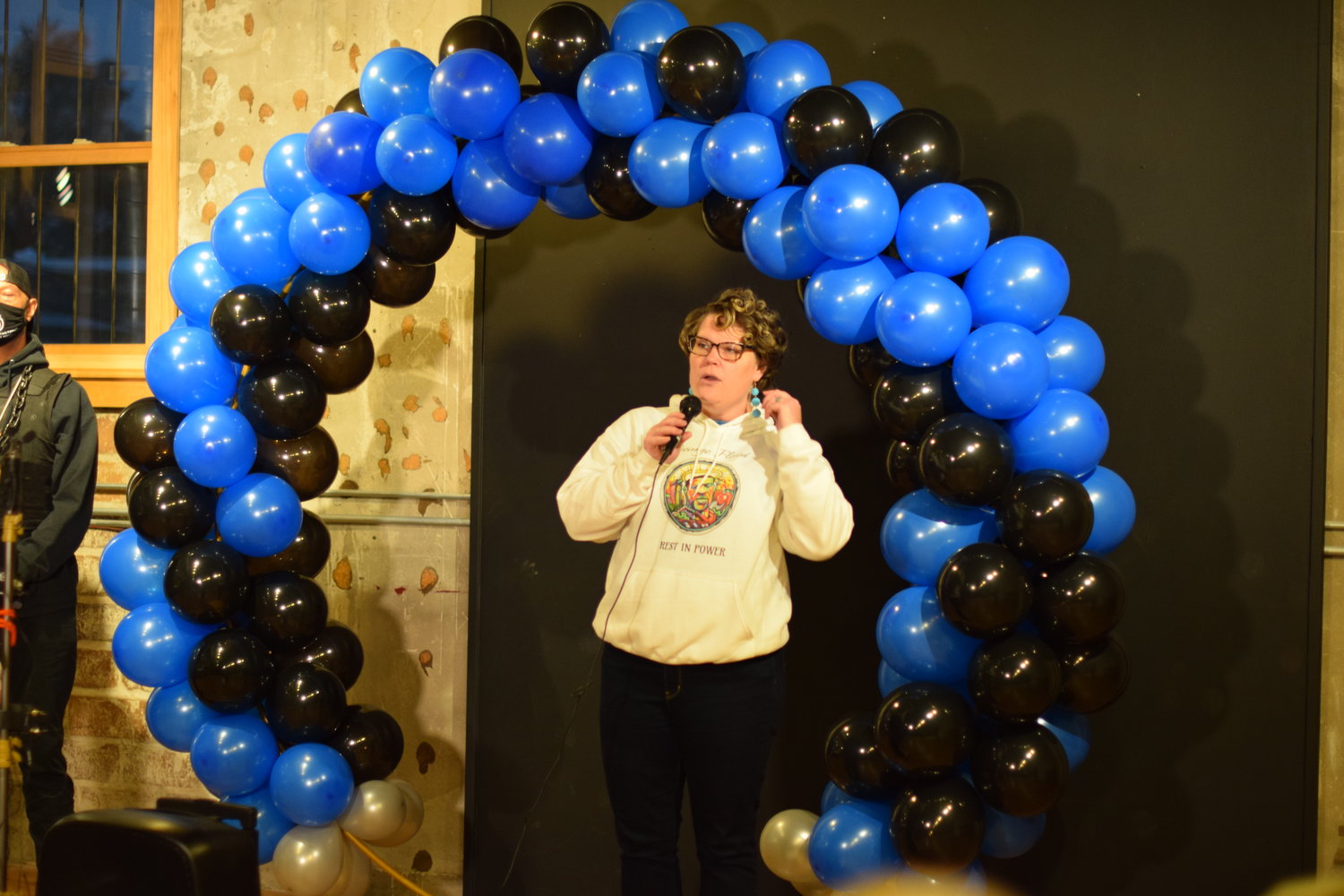 George Floyd’s significant other, Courteney Ross, tells people gathered that Floyd would treat everyone, no matter where they came from, how they looked or what they had, as a human being. (Photo by Jill Boogren) 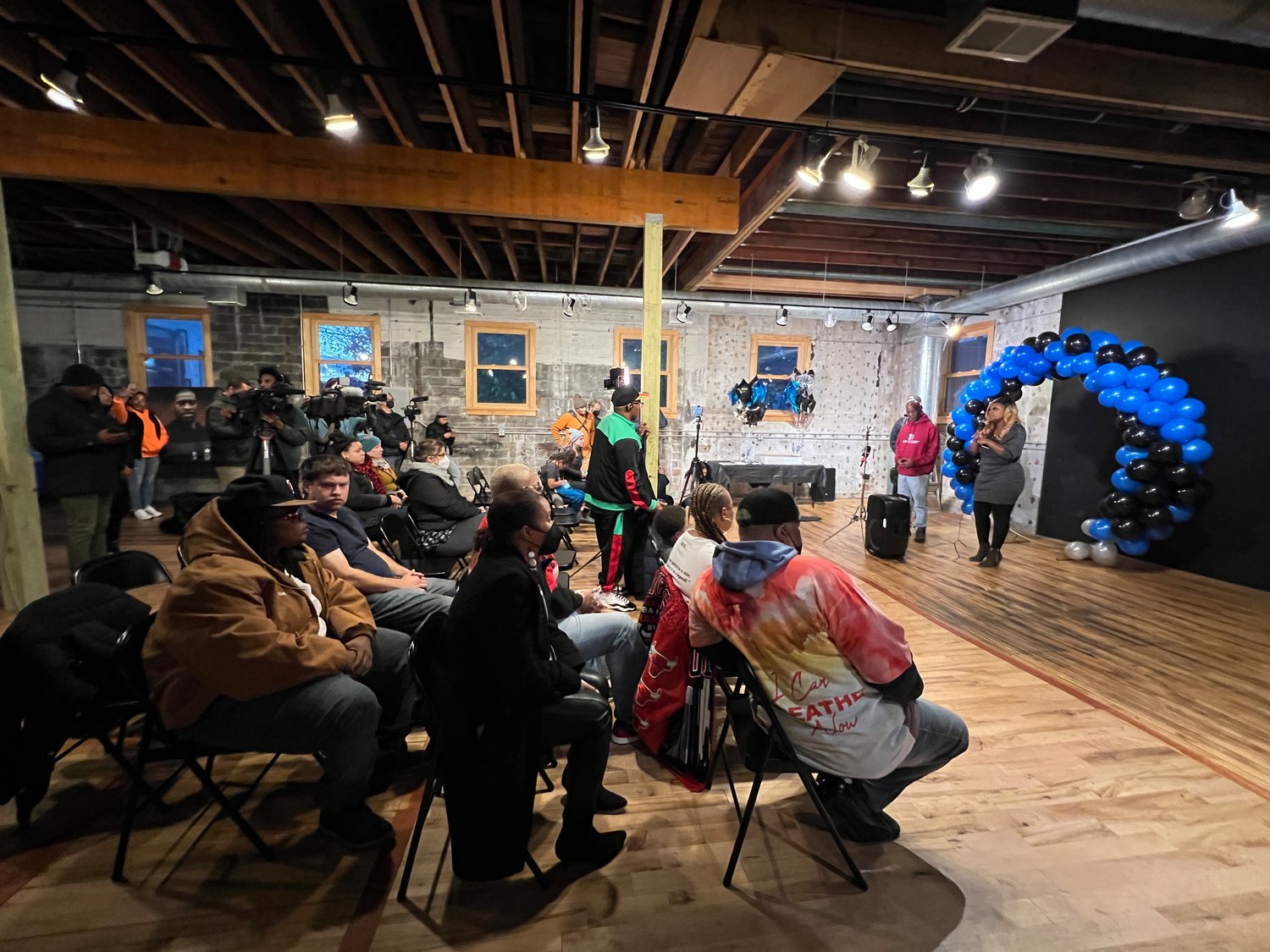 Guests honor George Perry Floyd at The Square at 38th and Chicago on what would have been his 49th birthday.
Jill Boogren 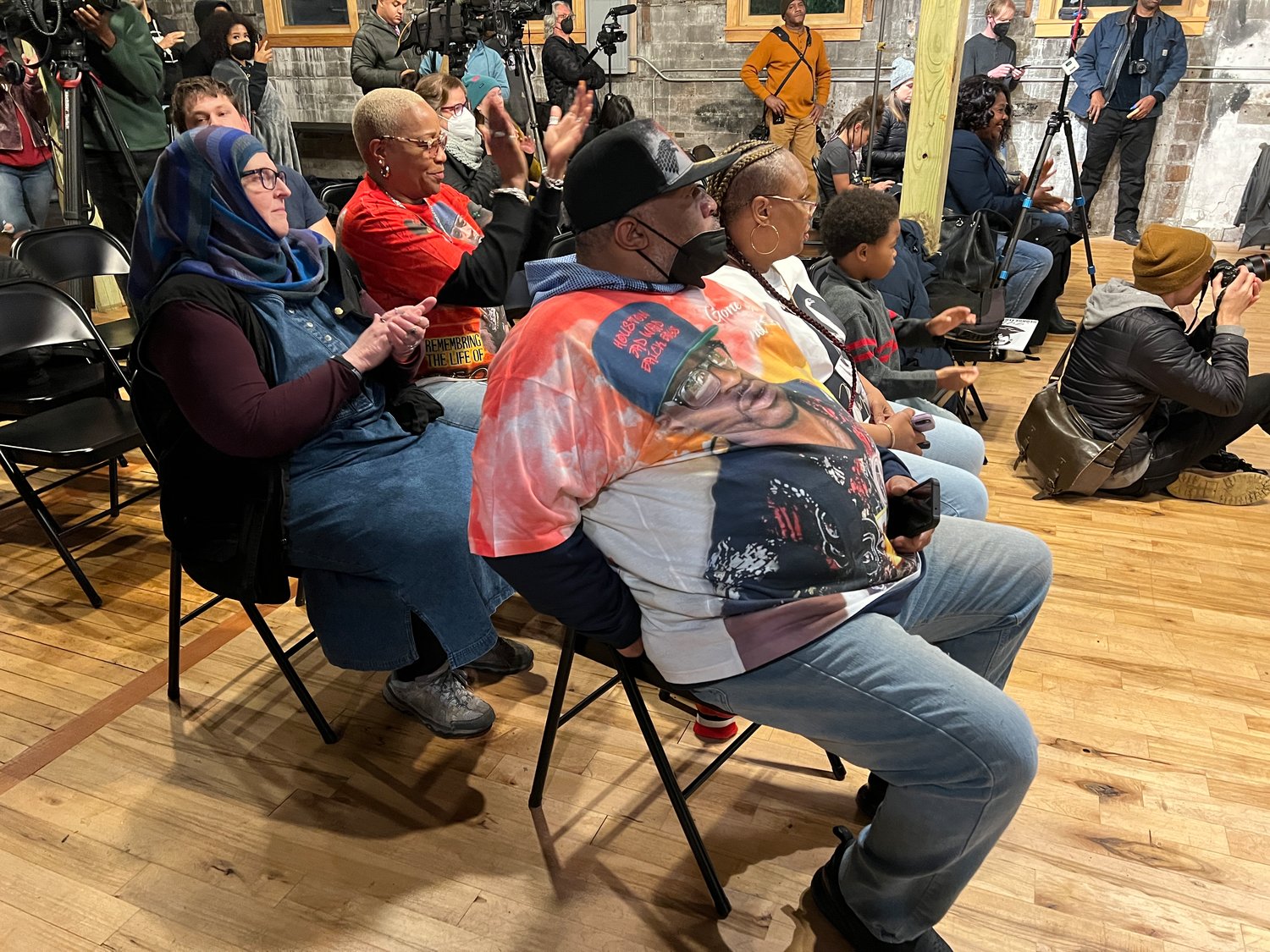 Guests honor George Perry Floyd at The Square at 38th and Chicago on what would have been his 49th birthday. 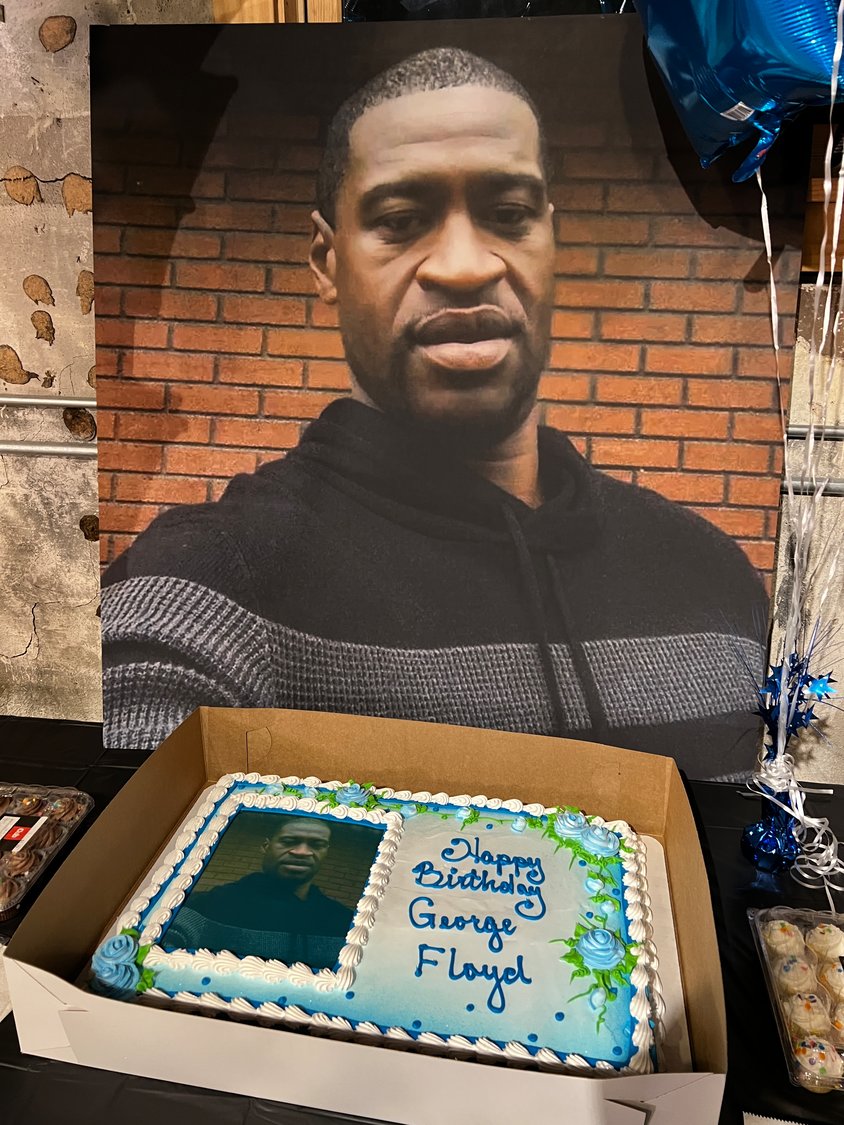 Family, friends and community members gathered on Oct. 14, 2022, at The Square event center (3736 Chicago Ave.) to celebrate the life and memory of George “Perry” Floyd on what would have been his 49th birthday.
Floyd’s aunt, Angela Harrelson, described her nephew as good in sports – he played basketball and football – and able to relate to the people in the neighborhood.
“They used to call him Big Floyd. Not because he’s so tall, which he really was, but because he really connected with the community.”
Before moving to Minnesota, Floyd lived in what Harrelson called a “rough” neighborhood in Houston, Texas, and went through his own personal challenges. But he had been reaching out to programs to help mentor some of the Black and Brown youth in the neighborhood – work Harrelson believes Floyd would have continued here.
“There truly wasn’t enough time for him. Because if he coulda did what he was doin’ in Texas, it would’ve been phenomenal,” she said. “He just didn’t have enough time.”
To those who knew him, Floyd’s magnanimous nature extended to everyone.
“Floyd is the type of man, he went up to everybody. People that a lot of us just kind of throw away and don’t even want to look at and don’t wanna be around,” said Floyd’s significant other Courteney Ross. “I noticed that in him, that none of that mattered. He would go around with everyone… and pray and love them up no matter where they came from or how they looked, what they had. And treat everyone just as a human being. Period.”
It is fitting, then, that a whole community has formed in the wake of his death. Another of Floyd’s aunts Mahalia Jones from North Carolina, praised those who came forward to protect and hold sacred the space at 38th and Chicago.
“That was one of the most amazing, powerful things that I ever heard. And y’all did that. And y’all continue to do that,” said Jones.
Floyd’s cousin Paris Stevens, also from North Carolina, acknowledged that the people at 38th and Chicago have been in “the thick and thin of it.”
“To go through that trauma, every single day, and to still stand – we’re all still standing. We have to keep pushing forward,” she said. “The trials and the tribulations won’t stop, but things are getting better. Change is happening.”
For Harrelson, this change is the gift Floyd left behind for everybody, change she described as “powerful,” a door that people “just ran through.”
“For the first time in history Black and Brown people ran through this door. Chains was broken. It’s like we was runnin’ for freedom. But this time we ran, we never looked back, because we saw that dream that Martin Luther King had talked about. We saw hope with a plan this time. And everyone was just excited,” she said. “So we need to keep that excitement goin’, not just for our family, but there’s other families that didn’t get a chance to have the publicity that we had.”
Stevens echoed the calls to continue the work.
“This has impacted people from all over the world. And we just have to keep the momentum,” she said. “It is a movement, and the movement has to continue. It doesn’t just stop with us, it continues through you all. We all have a voice. We all have to lift our voices in one way, shape or form.”
Earlier in the day, family members received a proclamation from Minneapolis Mayor Jacob Frey declaring Oct. 14, 2022, as George Floyd Day. Harrelson said it was an overwhelming day, but it was an “incredible birthday present” for Perry.
The evening event was organized by Families Supporting Families Against Police Violence, who support impacted families while seeking justice for the many lives lost at the hands of the police.
Floyd’s birthday fell just 10 days before the start of the state trial of the remaining two former Minneapolis police officers involved in his murder, J. Alexander Kueng and Tou Thao; jury selection was scheduled to begin on Monday, Oct. 24. The other two former Minneapolis police officers involved were already found guilty and are serving prison time: Derek Chauvin, found guilty of second-degree unintentional murder, third-degree murder and second-degree manslaughter on April 20, 2021, was sentenced to 22.5 years; Thomas Lane pleaded guilty to aiding and abetting second-degree manslaughter and was sentenced to three years. All four officers were also found guilty in federal court of violating Floyd’s civil rights.
Harrelson and Stevens cochair the George Floyd Global Memorial, formed to preserve the offerings left for Floyd as well as the stories of the community. Go to www.georgefloydglobalmemorial.org.