This year he has invested in 12 garden plots scattered throughout the city, a tilapia tank in his basement, and rickshaws that avoid the use of fossil fuels 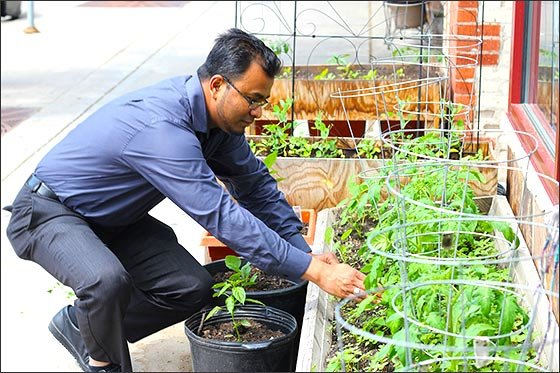 Gandhi Mahal owner Ruhel Islam tends the tomato plants growing on the sidewalk outside the restaurant. This year, Islam has 12 garden plots scattered throughout the city. (Photo by Tesha M. Christensen)

Be the change. Start small. Lead by example. Lake Street restaurant owner Ruhel Islam believes this is how you build community.

After a 2010 trip with HECUA (Higher Education Consortium for Urban Affairs) to his home country of Bangladesh, Islam, the owner of Ghandi Mahal restaurant, came back inspired. He was no longer content to just talk about the issues. He wanted to take action.

In 2011, they planted a garden in the backyard of employee Riz Prakasim, who resides in the Corcoran neighborhood. They planted late, but still managed to harvest 2,000 pounds of vegetables. This year, they have recruited 12 partners in Minneapolis and surrounding suburbs. Each landowner has provided a plot for a garden. Some are small, such as the single raised garden bed at Minnehaha Liquor and the containers outside Gandhi Mahal’s doors. Others are larger. There is a site manager for each location, and one coordinator to oversee them all. High school and college students are tending the gardens.

This year’s goal is to grow 10,000 pounds of vegetables. Some of the produce will be used fresh. Some will be frozen and canned for use over the winter in Gandhi Mahal’s kitchen.

Having homegrown vegetables is just one piece of Islam’s overall plan to be self-sufficient. He also intends to raise his own chickens, farm tilapia and possibly shrimp in his basement, and place bee hives on his roof (for honey in his signature mango lassi). Islam is not sure how long this overall effort will take and what pieces will come first, but he is confident his dream will be achieved.

And when it does, Islam hopes to offer a complete economic model for others.

Part of Islam’s drive to be self-sufficient is rooted in his own culture and home country of Bangladesh, where he grew up on a farm that his family still runs.

“I want to know where the food is coming from that I cook here,” explained Islam.

Islam is also concerned about the food chain here in America. As a restaurant owner, Islam has faces food shortages this winter. He was unable to buy eggplant, corn oil or naturally raised chicken from wholesalers. Onions tripled in price, and ginger rose from $18 to $28 a case to $50.

The food industry is not secure, he pointed out. Most of the farmers in the U.S. are over 65, and young people are opting for careers in medicine or law instead of agriculture.

There is no long-term supply of food, and the problem of not enough food for people becomes apparent during disasters.

Islam pointed out that the American food system is based on fossil fuels. He encourages others to buy local and grow local.

“We’re hoping to chain people’s mindsets about how we view and interact with our food chain,” said Prakasim. “A food chain based on fossil fuels is not sustainable.”

A PLAN TO BE SELF-SUFFICIENT

By late summer, Islam hopes to install a 500 gallon tank in his basement to house tilapia. The waste will be used to fertilize gardens and grow the cilantro, tomatoes, chilies and more they use in the restaurant. The tilapia themselves will be fed with chicken scraps.

“We are starting an aquaculture,” noted Islam.

He is also working with researchers at the University of Minnesota that are dedicated to making basement gardens a reality. New technology will port sunlight from the roof into the basement with zero loss. “We really want to work on the cutting edge of technology to propel indoor farming forward,” said Prakasim. He pointed out that Europe is 20 years ahead of the United States. “We’re playing catch-up,” Prakasim observed.

Another slice of Bangladesh will hit local streets later this summer when it is time to harvest vegetables from Gandhi Mahal’s 12 garden plots. Rickshaws are being specially built to transport vegetables from the garden to the restaurant and thereby avoid using any fossil fuel. A Kickstart campaign will kick off on Thursday, July 11. Proceeds from dinner at Gandhi Mahal that day will go towards the campaign.

In the kitchen, all the used cooking oil is gathered and picked up by Cat Biodiesel for use as biodiesel.

He operates on the principal that the more you give, the more comes back to you. Every Tuesday night, 10% of every meal goes to MN350, a group dedicated to building a climate movement in Minnesota. Proceeds from dinner every second Wednesday go to the Midtown Farmer’s Market.

Islam offers a community room for use free of charge to non-profits and community groups such as the Longfellow Restorative Justice Committee and the Longfellow Business Association, two groups he is active in. Other groups, such as the Permaculture Research Institute and HECUA, have held classes there.

A few months ago, the restaurant was designated a World Peace Site.

“We have to be the change we want to see in the world,” said Prakasim. It’s a lesson he’s learned from Islam, and one he’s passing along.

It’s been just five years since Islam opened up his Lake Street restaurant, but he has joined the ranks of those who have made a mark on the community and transformed East Lake Street into a place that can stand as its own destination location.