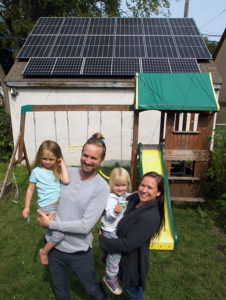 Eric Olson is thinking long term when he looks at the financial benefits of his investment in in a solar energy system. “If my only goal was seek the largest possible return, I could have found other places to put my money,’’ Olson says. But the South Minneapolis architect, who lives on E. Minnehaha Parkway, knows that his $20,000 solar investment will eventually pay for itself in terms of reduced energy costs.

Olson’s rooftop system is one of more than 70 solar installations in Greater Longfellow and Nokomis East. Cumulatively, these projects are able to produce over 2.2 megawatts of renewal energy, enough to power a 30-square-block swath of South Minneapolis.

Olson is doing his part with his 20 photovoltaic (PV) panels mounted on the roof of his house and his garage. He is financing his system with a five year loan at a 2% rate from the non-profit Center for Energy and Environment. While his monthly loan payment of $345 is roughly twice as much as his pre-solar electrical energy costs, his first two years of payments are offset by the subsidies he has received through federal tax credits and Xcel Energy’s Solar Rewards program.

“We may be paying double initially, but the loan will be paid off in five years. 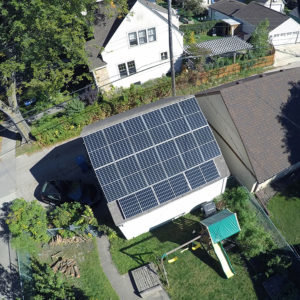 Eric Olson holds four-year-old Wren while his wife Sarah holds two-year-old Hazel. They put 20 photovoltaic panels on the house and garage with help from a five-year loan from the Center for Energy and Environment. (Photos by Terry Faust)

After that, our solar collectors will generate pure cash flow in terms of lower energy costs over the 30-year life of the system. Since we installed our system last November, it has produced six million kilowatt hours of renewal energy. In terms of our carbon footprint, we’ve planted the equivalent of 72 trees and saved 9,500 pounds of CO2 emissions.

“That’s not a bad investment in the future of the planet,” Olson noted.

In late 2019, when Olson’s solar system was put in place, his contractor, TruNorth, was able to mount the 20 PV panels over a single weekend. But that installation represented the culmination of a multi-month process that began when Olson had his initial consultation with TruNorth’s project manager, James Drummond, earlier in the year as they began working to determine the optimum size of rooftop system for the Minnehaha Parkway bungalow.

Their analysis took into account the family’s past electrical use, the bungalow’s roof configurations and any potential obstructions, including tree canopies, that might limit solar gain. Finally, the analysis factored in weather data provided by the National Renewable Energy Laboratory. TruNorth crunched the numbers to produce a cost and savings projection that incorporated renewable energy subsidies and tax benefits Olson was able to obtain.

“Installing a solar system is not a cookie cutter operations,“ said TruNorth’s Drummond. “You can’t go to the local building supply store to buy your solar panels off the shelf and install them, yourself. A lot of analysis goes into sizing each system. Each one is unique."

Across Minnehaha Parkway on 40th Avenue South, Arun Hejmadi has one of the area’s largest residential solar installations. Earlier this year, Hejmadi‘s 45 panels were mounted on the roof of his home and his garage. The Nokomis resident had not wanted to wait this long for a solar array to complement the geothermal system he uses to heat and cool his home. But when Hejmadi received his initial solar assessment several years ago, a local solar developer discouraged him from installing a rooftop system, saying that a large tree shading the southside of his house would limit of the efficiency of the system. More recently, Hejmadi needed to remove the tree, which substantially increased the roof’s solar gain potential. With the tree gone, he was able to install his 14-kilowatt solar array early in 2020.

“I may be spending more for electrical energy now, but I am more than offsetting costs by reduced my annual natural gas bill,” said Hejmadi. 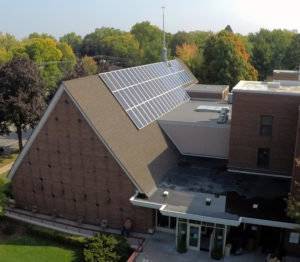 Down 50th St. at 37th Ave., Minnehaha United Methodist Church’s 40-kilowatt rooftop system was installed at the end of 2018. The church financed its system with a low interest loan from the St. Paul Port Authority through a program known as PACE (Property Assessed Clean Energy).

“We have about 18 months of data, which shows us how our system is performing,“ said Chris Kramer, a former chair of the Minnehaha’s solar committee. “A year and half out, the numbers in terms of production are slightly under our projections but they are close. The congregation believes we have made a smart investment at the same time that we are fulfilling our social mission.”

A half mile away, on 34th Ave., Nokomis Hardware’s 75 solar panels have been in place for over eight years. Nokomis’s owner, Carolyn Faacks, used All Energy Solar to install her system. She was able to arrange financing through “a pay-as-you-go” lease that eliminated the need for an upfront outlay on her part. Faacks leased her system from a developer who was able to take advantage of federal tax credits and a subsidy from the state of Minnesota. Now that the eight-year term of the lease has been completed, Faacks owns the 14-kilowatt solar system outright. 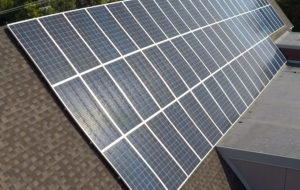 All Energy’s Brandon Charboneau has helped Faacks monitor the performance of the 14kW installation.“The monitor enables us to check the system to make sure it is operating properly. Over the past 10 years, there have been no real maintenance issues. The system takes care of itself,” Charboneau explained.

“I’ve always been interested in ways to reduce my consumption of resources. Renewable energy is the end game and the sooner we get there the better the outcome is for everyone,” Fraack said.

While Nokomis Hardware’s 14kW system may be one of the area’s largest solar installations on a free standing retail businesses, it is dwarfed in size by a mammoth system three miles away at 28th St. and 31st Ave. The building at that intersection houses a local renewable energy business, Greenway Solar, and several other tenants. When Greenways system is completed later this fall, its rooftop and a freestanding structure in its parking lot will be covered with 400 PV panels capable of generated 120 kilowatts of renewable energy.

Greenway’s CEO, Paul Krumrich, expects that the 120 kW system should cover the building’s total electrical needs on an annualized basis. Krumrich notes that his solar installation will generate more electricity than the building uses during summer, enabling Greenway to sell back its excess production to Xcel’s energy grid. But during the colder months Greenway will need to draw from the grid to supplement its solar production. “Over 12 months, that should even out,” Krumrich said.

Pete Lindstrom with Clean Energy Research Teams (CERTS) says that the increased interest in solar in Longfellow and Nokomis reflects a trend that is occurring throughout the state.

“Not that long ago, back around 2010, Minnesota did not show up on the solar map. The number and output of solar installations here were miniscule. But that has changed dramatically. In the last year, alone there have been more than 1,000 new installations all over the state. Solar is now generating a gigawatt of power and it is making a real difference. The power is distributive. It is coming from the Methodist church down the street and the family that lives across the alley.”

Lindstrom says that Minnesota is undergoing a solar boom because it is a “win-win” for people who use it. “Costs are coming down so solar makes more sense from a strictly financial perspective,” he explains. “At the same time solar represents a very tangible step that people can take on their own to promote environmental sustainability. Solar development is going to keep building in Minnesota. That’s a very good thing.”