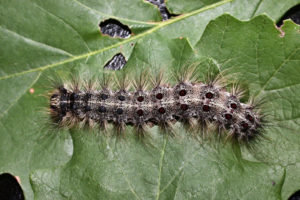 Gypsy moth caterpillars are voracious eaters, and can strip entire trees of their leaves.As an invasive species, they have few natural predators in Minnesota. Repeated defoliation can kill trees, change the mix of tree species in an area, and affect dependent wildlife. (Photo courtesy of MDA)

The Minnesota Department of Agriculture (MDA), in collaboration with federal, state, and local partners, is proposing to treat gypsy moth populations in the Nokomis area of Minneapolis this spring.

The MDA is proposing a management plan to eradicate gypsy moths on 298 acres in the Wenonah neighborhood, with the northern boundary extending into the Keewaydin neighborhood. The proposed treatment area is bounded by the following streets:

Two information sessions were held in late February at Crosstown Covenant Church and Keewaydin Recreation Center in the Nokomis neighborhood.

Kimberly Thielen Cremers, MDA Plant Pest Manager said, “We also did a direct mailing to residents in the targeted area. Our staff put flyers in public spaces like bus stops, gas stations, and apartment complexes. All literature was written in English, Spanish, and Somali. We do not have a plan for additional public meetings at this point. However, if there is community interest, our staff can arrange to come and speak at an event.” Contact project manager Marissa Streifel at marissa.streifel@state.mn.us, if interested.

The European gypsy moth is not native to the U.S. It has worked its way west from Massachusetts, where it was introduced in the 1860s. Isolated populations are appearing in different parts of Minnesota, as gypsy moths continue to advance south and west.

Large numbers of gypsy moth caterpillars can cause a reduction in tree growth, branch dieback, and eventually tree death. The treatments proposed for 2020 will decrease the likelihood of defoliation, and will slow the expansion of gypsy moths in Minnesota and beyond.

Since 1973, the state of Minnesota has been actively surveying for gypsy moths. Minnesota’s first gypsy moth eradication project was conducted in 1980. Since that time, over a million acres have been treated in Minnesota to eradicate or slow advancing gypsy moth populations. Treatments have been conducted throughout the Twin Cities metro area, including the Lowry Hill area of Minneapolis in 2018.

The gypsy moth is a leaf-eating insect. It belongs to the same order as butterflies and moths (Lepidoptera). It feeds on more than 300 trees and woody plant species found in Minnesota, and is considered one of the most destructive pests in the U.S. For more information about the MDA’s gypsy moth program, email gypsy.moth@state.mn.us

Foray to be used locally

For the proposed treatment in the Nokomis neighborhood, the MDA and its partners recommend using Foray: a water-based, organic, biological insecticide that kills gypsy moth caterpillars. The active ingredient in this product is the naturally-occurring bacteria Bacillus thuringiensis kurstaki (Btk), and the crystalline proteins it produces. When ingested, the proteins are toxic to gypsy moth caterpillars and other butterfly and moth caterpillar species that are actively feeding.

Thielen Cremers said, “We get a lot of concern about other butterfly and moth species being affected. Foray will only affect caterpillars in the early stages of development that are actively feeding. Applications are made before the general monarch population in this area has returned.”

Foray does not affect humans, mammals, birds, or most beneficial insects including bees. Gypsy moth caterpillars stop feeding and die within a couple days. Foray is broken down naturally by sunlight. Two applications (made about a week apart) are used to make sure all gypsy moth caterpillars in the treatment area are exposed.

The proposed treatments will take place in May when gypsy moth caterpillars are very small. Treatments generally happen early in the morning using an airplane or helicopter. The treatments are applied at low altitudes, approximately 50 feet above the treetops. Aircraft are equipped with the latest available technologies to ensure application is accurate. Non-forested areas such as large fields, stretches of pavement, and open bodies of water are not treated.

Thielen Cremers explained, “If a person is out during an application, they will smell a slight fermenting in the air. The product is applied at a rate of one-half gallon per acre, and more than 90% of that is water. Most people will not notice more than a fine mist, if even that.

“Exact dates and times of application will depend on weather conditions and caterpillar development. You may see or hear the low flying aircraft in your neighborhood at the time of application.”

• The MDA will mail a postcard that will identify a timeframe for the treatments.

• Go to www.mda.state.mn.us/gmtreatments to sign up for text or email messages.