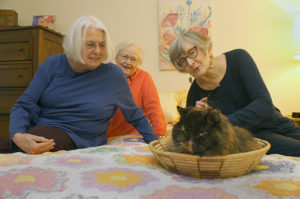 Members of the Cat Consortium around 19-year-old Tally the Cat include: (left to right) Linda Kusserow, Bonnie Porte, and owner Clare Fossum, who relied on the other women during a recent time away. (Photo by Terry Faust)

Earlier this year, when Clare Fossum had to spend time recovering from a medical procedure, she knew she could rely on her neighbors at Becketwood Cooperative to look after her elderly companion while she was away from home recuperating at a local rehab center.

Fossum’s companion happened to be her 19-year-old cat, Tally, who had made friends with two neighbors, Bonnie Porte and Linda Kusserow. Porte lived down the hall and Kusserow was two floors away. They each took turns feeding Tally, bringing her fresh water and spending time with her while Fossum was in rehab.

“It was a great relief for me to know that Linda and Bonnie were there every day looking after Tally,” Fossum said. “She knew them and they knew her. It was not as if some strangers were always coming and going in the apartment. That would only have upset her.”

Fossum, Porte and Kusserow had been part of an informal network of cat owners at Becketwood who looked after each other’s pets when they were away. The neighbors at the “55 plus” senior co-op bonded over their common connections to their feline friends and formed their own friendship circle within the broader Becketwood community.

The network has evolved into a more formally structured Cat Consortium with two teams, one for each wing of the building. Cat owners email their team members when they need a neighbor to care for their pet.

“It is all very well organized,” Porte explained. “We even have a form that people fill out indicating their kitty’s food preferences, their medication needs, and the contact information for their vets.”

While their small feline friends brought members of the Cat Consortium together, other neighbors at Becketwood have bonded over their love of singing. They are known as the Becketwood Comfort Singers. They bring their music to people at Becketwood or in a care facility who may be house-bound or seriously ill or facing end-of-life issues. Their leader, Ruth Gaylord, patterned the Comfort Singers after a similar group she had formed at the Basilica of St. Mary.

Gaylord, a former high school choral director, lives with ovarian cancer. She said that she has thought about being surrounded by beautiful choral music when she is dying. “I would like a small ensemble to sing beautiful music to me as I approach the end of this life. So I looked for men and women from Becketwood who had experience as choral singers who would want to be part of a small ensemble to offer that gift to others.”

She added, “We offer our singing to those who request it, and then only when we have checked with them or their families in advance to find out what kind of music they would like to hear. Some people don’t want to be sung to when they’re going through a difficult time. We understand that.” 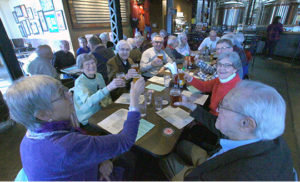 The Comfort Singers may be a select group with limited membership, but that is not the case with more than a dozen special interest clusters at Becketwood known as the Member Activities Committees. The individual committees are coordinated by an umbrella organization, the Members Activities Council (MAC).

Kirk, himself, has had fun organizing a series of pub crawls sponsored by Becketwood’s Excursion Committee. “When all the brew pubs started opening up, I thought people here might want to see what they were all about. They all liked that first excursion so we started doing more of them,” Kirk said.

Newcomers also get to know their neighbors in Becketwood’s workshop which hosts a coffee gathering every weekday morning starting at 10 a.m. “Morning coffee used to be all men, but women have started showing up and they always welcome,“ said Joel Mortensen, who co-chairs the Workshop Committee with Todd Gulliver.

Ray Mikkelson, a coffee drinking regular, admits that he comes down to the workshop for some male bonding. Mikkelson remembers taking a tour of Becketwood while he and his wife, Helen, were still on the waiting list.

“I kept wondering where the men were; I didn’t see any on the tour,” said Mikkelson. “Then somebody told me that I should go to the workshop in the basement. When I got there and opened the door, I saw a group of men drinking coffee and having a good time. They took me in right away and I felt at home. This is where I want to live, I told myself, and it made our move to Becketwood much easier for me.”

Wayne Tellekson, another workshop regular, also serves as a tour guide for people who are thinking about moving to Becketwood. “When I talk to prospective members about our community I tell them about the experience that my wife, Sindy, and I had when we first arrived here. We had moved from Mendota Heights where we didn’t have much contact with the people who lived nearby. On the second day we were here, two of our new Becketwood neighbors came up to us,introduced themselves, told that they were having a picnic in the courtyard, and invited us to join them. I looked at Sindy and said, ‘We are home!’”

* Editor’s note: Writer Iric Nathanson is a member of the Becketwood Cooperative.