Integrating Restorative Justice into our city 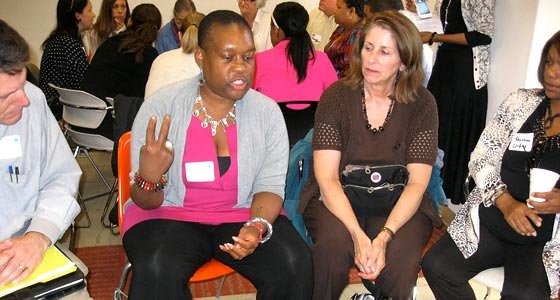 Giving people the tools they need to resolve conflicts.

A better path to better outcomes in our criminal justice system.

These are all the results of Restorative Justice, a program that is being gradually integrated into the City of Minneapolis.  It is about restoring any harm that has been done to a community; victims and offenders come together, and the impact of the offense is made known.

“A simplistic view of restorative justice is that it’s just a good alternative in an individual case that would otherwise go to the criminal justice system,” said Andrew Johnson, Ward 12 Council Member. “A more complex view is that it only may apply to a scuffle between two teens, and not gun violence. But gun violence is often the result of individuals not having tools to work their problems out in an appropriate way. Restorative justice is about teaching that. It is about conflict resolution.”

Johnson is such a strong believer in it that he convened a conference this fall on the topic, bringing together advocates, youth and city leaders for a Youth Summit on Restorative Justice.

Bringing together different generations, former offenders and participants in restorative justice programs, the conference offered attendees an opportunity to learn more about how too many Minneapolis youth are harshly disciplined when more supportive and reparative forms of discipline could be used.

“In a large part, Minneapolis is a tale of two cities within one,” Johnson said. “There’s a huge disparity within our system. Right now, one in three black men are in prison for the same exact offense, and black male students are four times more likely to get expelled. “

Johnson said a recent ACLU report showed that men of color are more likely to be cited for specific crimes. “You see these disparities represented across our city,” he continued. “Not just citations and arrests, but also in the education gap, and in socioeconomic and environmental concerns, across the board. We have the worst employment rates in our nation for Afro-American males. Why it’s so egregious when it comes to crime, is that we know that people who enter our criminal justice system are not being set up for success. We have the tools to do better, and restorative justice is one of those tools.  Again, we have this tale of two cities and here’s our chance to close that gap and bring about one Minneapolis where prosperity isn’t predictable by your race.”

Former Viking Oscar Reed, who has worked for years in the field of restorative justice, addressed the conference about his experience working with students in the St. Louis Park High School. Once restorative justice talking circles were in place in the school, there was a reduction in suspensions as well as absenteeism.

“I got word one day about a fight planned after school. I called a couple of guys, and they were excited and going to watch it. I asked them what had we been talking about in circle all these weeks. They told me they got it; no fight happened. It was an example of the power of restorative justice,” Reed said.

Johnson cited a study in the San Francisco county jail that implemented the restorative justice program. “It virtually eliminated jail violence and cut violence offenses by 90 percent,” he said. “So if we want to cut recidivism rates, we absolutely know restorative justice is far more capable of that than our current punitive justice system, which doesn’t pretend to rehabilitate.”

Sarah Johnson, a youth advocate attorney, told the conference participants that there is a sense of urgency for restorative justice. “Minority youths have much higher contact with our legal system,” she said. “Black youths are arrested at more than six times the rate of white youths.  We are making some incremental progress, but it’s not good enough.”

She said policy changes need to be made, getting restorative justice in schools city-wide and making it a mandatory part of the court process.

Johnson sees restorative justice as a program that can affect all ages.

“We have a lot of opportunity across the whole system, and I see that personally overwhelming to think about how it stretches so far beyond the city. But you can say that about everything, like climate change. You can’t let that paralyze you from action,” Johnson explained,  “and you have to start somewhere.”

He emphasized that support systems need to be in place, or individuals coming out of prison will be limited in their options. “If they can’t get a job or good housing, what are they going to do? Too often they will fall into the same old patterns.”

He said that starting restorative justice programs with youth is a strong area to focus on, if you’re going to disrupt the cycle of business as usual.  “I think the chance to do that is getting to individuals when they’re young and making sure they are set up for success at a young age, because often times young people are not committing egregious crimes; they’re committing smaller crimes and go on to be adults who commit far larger crimes.”

According to Johnson, the city currently spends $40,000 a year on restorative justice programs, yet over $150 million a year for the Police Department and $7.5 million for prosecution under the City Attorney’s office.

He said that funding is definitely an aspect of promoting restorative justice, and he thinks the city could do better. “But I also think we need to make sure we are integrating these approaches at every level,” he advised. He said he would like to see conflict resolution in both the schools and the community.

He said the city is putting together some specific policy initiatives that will be introduced by spring.

“Restorative justice is so applicable to everything; relationships, work, family, friends, and it just so happens it also relates to crime and violence,” Johnson said. “I would encourage people to be a part of this solution, to work with groups such as the Seward Longfellow Restorative Justice Partnership and help young people with those communication skills and conflict resolution skills. Help them become a stronger part of the community. If we don’t do it, who will?”