The little brick building on the corner of 41st and Minnehaha Ave., easily spotted by the rocking horse, hanging bicycle and an assortment of old chairs on the sidewalk, will soon be housing All Square—a gourmet grilled cheese restaurant with a social purpose. 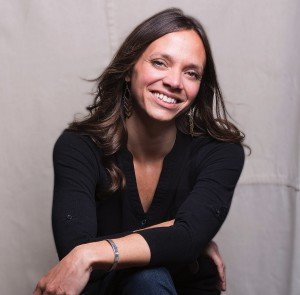 Founded by Emily Hunt Turner (photo right, provided), All Square aims to reduce recidivism by giving people with criminal records a better chance at successful reentry through work and professional development. The name itself refers not just to the shape of the sandwiches, but to the idea that, once you’ve paid your debt to society, you’re “all square.”

The idea came from a place of feeling pretty helpless, Turner said. A civil rights attorney with a background in criminal justice and work on fair housing issues, it was unbelievable to her how many people with records could not access housing. As a whole, the system was overly punitive.

“There weren’t any remedies we could provide,” she said. Feeling like we’ve actually devolved in civil rights, she wanted to be able to answer “Yes” to the question: “Systemically, are you part of the solution?”

About one in three adults, or roughly one hundred million people, are said to have criminal records, which limits their access to employment. But Turner, citing Emily Baxter’s aptly named book, “We Are All Criminals,” maintains that the number of people who have broken the law and should have a record but don’t is much higher. Considering that about two-thirds of people who are released are rearrested within three years, according to the National Institute of Justice, Turner wants to give people an opportunity to work to remove that significant barrier to reentry after serving time.

“Second chances are critical,” she said. “We all need them.”

It's safe to say Turner never dreamed she'd be running a restaurant. She’s the first person to acknowledge she’s not a cook, with grilled cheese being one of the only things she’s capable of cooking. So much so, that her friends know that’s what they’ll be having if they ever eat at her place. They told her, jokingly, that she should open a grilled cheese shop someday, an idea that eventually clicked.

Why not? Turner thought. Grilled cheese sandwiches are earning their rightful place on the menu. Why not be the employer who puts people with criminal records to work?

Turner is well aware that restaurants are risky business and incredibly nuanced, but she’s received affirmation from a few places. One is from Edwins, a similar (albeit higher end) establishment in Cleveland, OH, that in seven years has shown a reduction in recidivism. Another was the successful Kickstarter campaign she launched last fall that suggested people would get behind the idea. 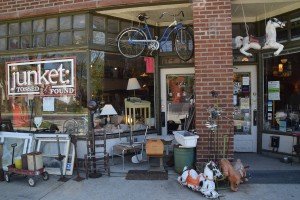 Photo left: Junket’s storefront. The door to the left will soon open into the All Square gourmet grilled cheese restaurant. (Photo by Jill Boogren)

“I really trusted the idea would work and the model would work,” she said.

She’s also working with industry professionals who are offering much-needed guidance. Jodi Ayers and Heather Bray, co-owners of Lowbrow (which was just named by Foursquare as one of 15 places to have a grilled cheese sandwich right now), have provided mentorship in the pragmatics of opening and running a restaurant: how to think about inventory, crunch the numbers, how to contract, design a kitchen, run a kitchen, and operate the front of the house. And Chef Sarah Masters (formerly of Barbette) helped craft the menu, putting the “gourmet” into the grilled cheese. 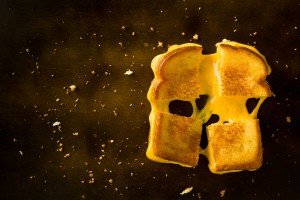 “There are some incredible variations of grilled cheese that she came up with,” said Turner. “

She also has a retired chef who wants to volunteer and help get everyone trained in, and she’s learning from those with direct experience.

“We have people who have been incarcerated who are on our Board of Directors, in our leadership,” she said, adding that too often people who have experienced these barriers are not at the table. “I trust them completely,”

All Square aims to provide professional development assistance, and Turner imagines a “prison-to-law-and-policy pipeline” for those who are interested in pursuing legal and criminal justice careers.

The restaurant will be housed on the left side of the storefront, and Junket, on the right, will retain its current front door. All Square will have an open window kitchen with a countertop bar facing it and seating toward the front. Turner expects to have 11-14 employees on board, with their open hours mostly aligned with Junket’s schedule.

The enterprise makes sense for Junket Owner Julie Kearns, who sees a desire for a walkable food option near 41st & Minnehaha. Turner’s values are also a natural fit. 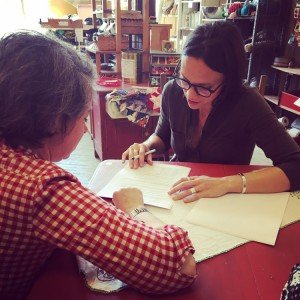 Photo left: Julie Kearns and Emily Turner sign the lease, which will convert part of the space at Junket to make room for All Square. (Photo provided)

“It’s a healing neighborhood,” said Kearns, whose own compass is trained on being in service to the community. Her shop, first and foremost, has an environmental mission: reducing waste and creating a stable future for her daughter, Meridel, and her contemporaries.

“This is about a future society that runs better than the one we’re in now,” she said.

Kearns has already raised the idea with Turner about creating a zero waste restaurant, an idea Turner is exploring and which has already informed some of her purchasing decisions.

“ is 18 steps ahead of me at all times,” said Turner, who is looking into purchasing used kitchen products. “Because... who needs new”? This is a mindset that Kearns wants to take hold throughout the marketplace.

Kearns may be downsizing her shop footprint, but she’s kicking around some giant ideas of her own. In 2015 Kearns contracted with Ecotone Analytics, GBC, to track carbon dioxide emissions avoided by consumers buying used instead of brand new items. To the best of Kearns’ knowledge, hers is the only retailer in the country undertaking such product-specific analysis, which she and her staff have conducted by meticulously weighing and tracking items sold in her shop.

Last year, Junket’s customers purchased 14,825 items with a combined weight of over 6.2 tons, much of which would have gone into the waste stream. The production of new goods, according to Junket’s 2016 carbon impact data, would have generated more than 31 metric tons of new carbon dioxide emissions.

To bring this home, Kearns focused her attention on the tiny but ubiquitous paper clip and found significant savings in buying existing versus brand new or recycled ones, even factoring in the cost of transporting them. In fact, Kearns calculated, a reused paper clip could travel 30 times from New York to Los Angels by train before reaching the CO2 emissions it would take to produce even a recycled paper clip. Consider that 11 billion new paper clips are purchased each year, and they’re all made of steel, the production of which creates 16,830 tons of CO2 emissions—the equivalent of driving all the way from Earth to Venus—and suddenly that tiny little paper clip looks a whole lot bigger.

“If I have this much impact, imagine the impact of everything else,” suggests the personified paper clip on her infographic, above images of safety pins, a kettle, silverware, kitchenware, and a bicycle.

To tackle the problem, Kearns wants to treat throwaways as commodities and mainstream reuse. She envisions a supply chain that gets what’s in people’s attics and closets to the people who need them. For this to work, secondhand shops need to specialize and organize in ways they currently don’t. People need to adjust their standards (secondhand can still mean first-rate) and accept mixed sizes and possible imperfections (much like they do with the less uniformly-sized apples in the organics produce section, for example). And the packaging itself needs to come from reused materials.

Kearns wants to “revolutionize retail through reuse,” the goal being for people to rethink what we buy, thereby pushing demand for reused goods and ultimately forcing retailers to rethink what they sell.

“We’re working to provide high-quality ease of access to the most sustainable goods possible: those that already exist,” she said.

To that end, Kearns is doing what she can to organize inflow. She is developing education materials as well as a prototype app, already underway, that will match reused goods to the people who need them. She still has her sights on paper clips, and will begin working with schools to collect the ones they would otherwise discard.

“If I can solve this for paper clips, I can do this for anything,” she said.

So yes, big things may soon be coming from the little building at 41st & Minnehaha. All Square plans to open in the fall. Together, they’ll push sustainability and what it means to be in service to the community one grilled cheese sandwich and one paper clip at a time.

Staff members through the years