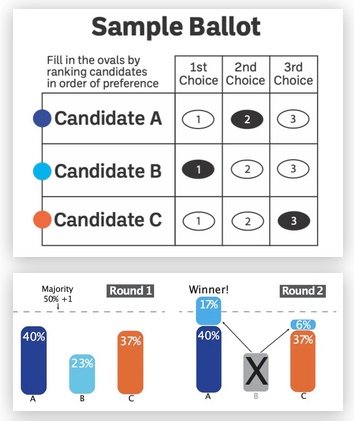 Struggling to figure out who won in the Minneapolis races that use ranked choice voting?

In ranked choice elections, voters rank as many or as few candidates as they like from their favorite to least favorite: first choice, second choice, and so on.

Multi-seat ranked choice elections function similarly, and by not wasting any vote they yield proportional representation: taken as a whole the group of  winners accurately represents the voters’ will. The video below provides an excellent visual representation of the process.

RCV is the most cost-effective and efficient way to ensure winners have broad voter support and eliminate spoiler and strategic voting dynamics.

More than 545,000 ranked choice ballots have been cast in Minnesota since 2009 when Minneapolis began using the system. RCV is used in Minneapolis, St. Paul, and St. Louis Park, and was adopted by Bloomington and Minnetonka voters in the 2020 election. Each of these five cities will use RCV in 2021 for mayoral and city council elections.