Insurance doesn’t cover all the costs of conforming to city’s 2040 plan, but the Krause family committed to staying 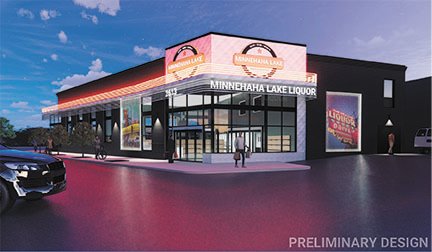 What the proposed building will look like from Minnehaha Ave. and the parking lot. 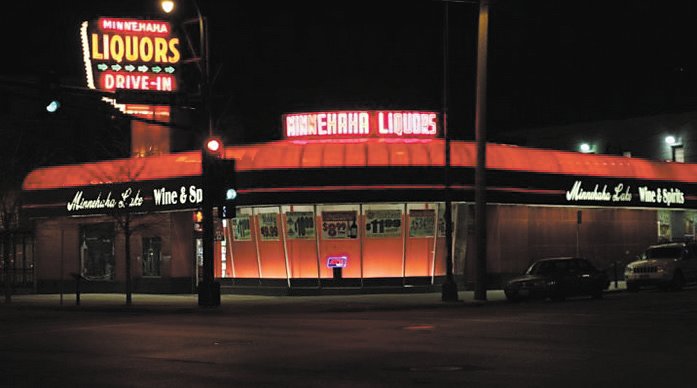 What Minnehaha Wine & Spirits looked like prior to the May 2020 fire. 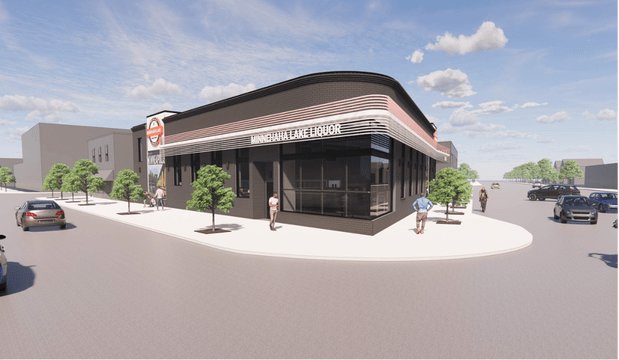 What the proposed building will look like from the same intersection of E. Lake St. and Minnehaha Ave. 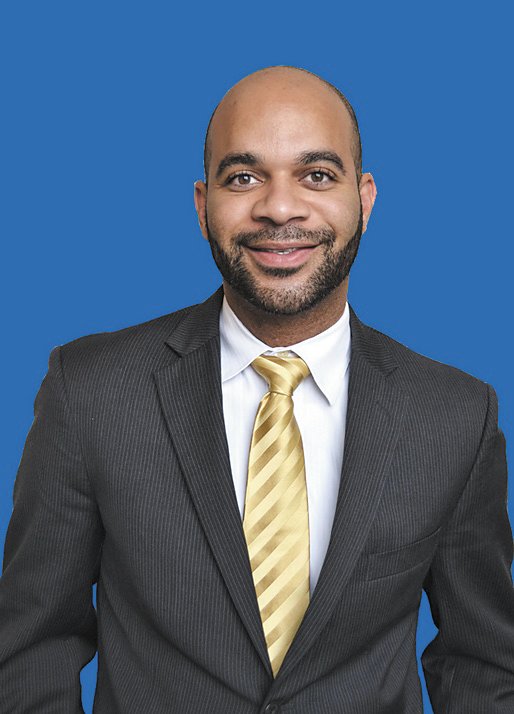 Although they considered moving, Minnehaha Lake Wine & Spirits (2613 E. Lake St.) owners Steve and Jason Krause plan to rebuild the store that was burnt down in last summer’s civil unrest.
The liquor store is located across the street from the Third Precinct building, and is among several businesses in the area that were burned down, looted and vandalized. Others include Gandhi Mahal, the Minnehaha Post Office, Auto Zone, the Nuevo Laredo building, maX It Pawn shop, Domino’s and a multi-story housing complex under construction.
The housing complex and the auto parts building are being rebuilt, and Minnehaha Lake Wine & Spirits will join them. Owners are hoping to be reopened by spring 2022.
“From Day 1 when we were digging up the rubble, we knew we were coming back,” said Steve Krause, who runs the store with his son Jason. “It would be easier and less costly to build a larger store in the suburbs. But my life is on that corner.”
Three generations of his family have operated the liquor store at Lake and Minnehaha, known for its large iconic sign on the roof and red overhang.
Due to current zoning laws and the high costs of neon signs, neither the recognizable sign nor the overhang will be part of the new building, according to Keon Blasingame of Minneapolis-based LSE Architects, who presented plans during a community meeting organized by the Longfellow Community Council on March 23, 2021.
But they have incorporated things into the new design to mimic the old. Bands of LED lighting will ring the outside and be lit red like the old canopy. Metal signs and lights will be reminiscent of the Art Deco facade. “We wanted to do a design that would be respectful of the history of the site,” said Blasingame.
The one and a half-story, 7,000-square-foot-building needs a conditional use permit as the zoning there now requires two or more stories.

City didn’t just allow them to rebuild
Delaying the process of rebuilding has been the need to design something according to the city’s new zoning codes. The store was not grandfathered in and could not just rebuild as it was previously.
Additionally, insurance does not cover the cost of a new building. “There is a substantial shortfall,” said Krause. “Building costs are substantially higher to come into compliance with the 2040 plan.”
The new building will sit in the same footprint as the old and on the site of the former tobacco shop that was next door. The Krause family owns both sites through the company M & E Inc. The parking lot will remain the same size as it was.
The main door will move and be located off the parking lot instead of at the corner of Minnehaha and E. Lake St.
The building will have an open floor plan and allow good visibility through the store and onto the street. However, the plan needs a conditional user permit as the window requirement won’t match the city’s zoning code. This will allow room for shelving on the sides of the walls under the windows.
They haven’t decided yet if they will use rolling shutters or shatter-proof glass. “We’ll have substantially more glass in this building than the last one,” observed Krause.
“Although the planned building largely takes the form of the building that burned, the owners have applied for variances and a conditional use permit to address the city’s decision to require variances from current codes, including the Minneapolis 2040 plan. For this reason, the owners have applied for a conditional use permit to have a liquor store, even though these same owners have owned a liquor store at this location for approximately four decade,” wrote Kim Jakus of the Longfellow Business Association in a letter of support for the project. “The owners have also applied for variances to the current building height, floor area ratio, and window standards requirements set forth in current code.
“We look forward to regaining a valued part of our business community when Minnehaha Lake Wine & Spirits reopens, and we hope that the city of Minneapolis will facilitate our community’s recovery by granting the CUP and variances.”

No housing above liquor store
Several people at the March meeting pushed the Krauses to build a multi-story facility and include housing on the upper levels.
Blasingame explained that they had initially come to him for the design as affordable housing is his specialty, but it didn’t work at this site for numerous reasons. “With the numbers, it is very difficult to do housing,” he said. “Because of the tight constraints of the site, it wasn’t feasible.”
The new store will look like a two-story structure, said Krause. “I think it will be much more of a presence.”
There will be spaces along the outside of the building for murals, and the intent is to use local artists.
A builder hasn’t been selected yet. The Krause family anticipates shortages in materials that may delay the project.