Orchards, gardens, and even rice could be part of his new vision for city parks 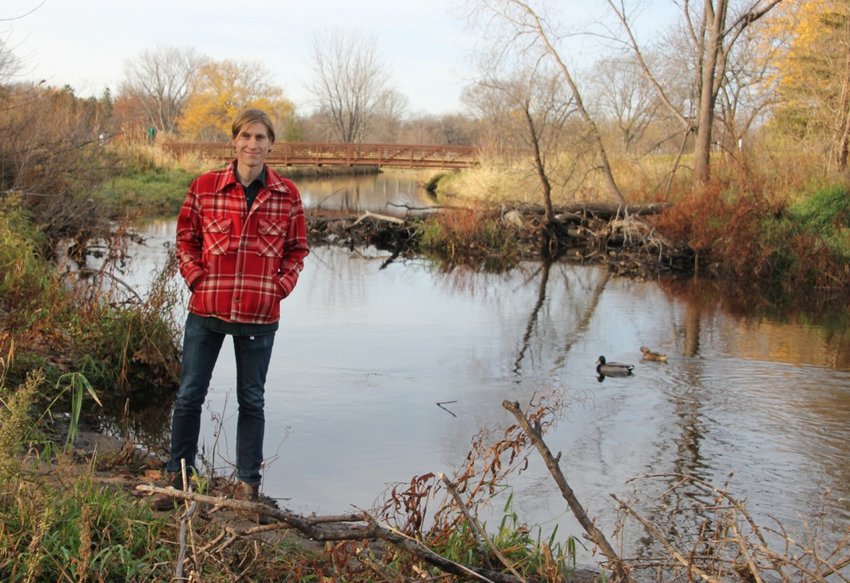 Ryan Seibold stands next to Minnehaha Creek near where it currently empties into Lake Hiawatha. Given the water issues at the Hiawatha Golf Course, which at some points lies about 4 feet lower than the lake, he is proposing that a food forest be put there instead. (Photo by Tesha M. Christensen)

What’s a good use of the land at the Hiawatha Golf Course?

Standish-Ericsson resident Ryan Seibold questions whether it is a golf course due to the troubling water issues there. Instead, he is proposing that the land be transformed into a food forest, full of fruit trees, berries, vegetables, and grains.

“I think now is the time for the city to look at new visions for how best to use our abundant parklands,” stated Seibold, 38, who earned his master’s degree from the University of Minnesota Landscape Architecture program in 2010. Seibold explained that a food forest is an intentionally designed edible ecosystem that hosts mutually beneficial plants and animals for food production purposes. And, he maintains a food forest could co-exist with the golf course if the decision is made to keep it there once studies are complete.

“I see recreational opportunities and habitat creation for wildlife as possibilities that can go together,” said Seibold. “I envision a dynamic environment for humans, plants, animals, and insects to play in.”

Jeff Zeitler of the soon-to-be-opened Urban Forage Winery (3016 E. Lake St.) thinks this idea could catch fire. “Our kids are bussed out to Minnetrista to see an apple orchard for a field trip in the fall,” Zeitler observed. “Wouldn’t it be cool if they could go to Minneapolis instead so that they don’t have to think that growing food has to take place ‘somewhere else’?”

In addition to showing kids (and grown-ups) where food comes from, Zeitler pointed out that this could potentially make fresh food available for free or at a low cost to anyone willing to pick it.

“As the chair of the Homegrown Minneapolis Food Council I understand the importance of growing healthy food for the community to access,” said Russ Henry of Giving Tree Gardens, at 4549 41st Ave. S. “As the owner of a local landscaping company, I can see the obvious potential for food grown in public spaces. “Whether we’re talking about urban food forests, urban farming, or community gardening, the land around us needs to be productively utilized in the city,” said Henry.

Public health improvement is one result of having economically accessible fruits and vegetables, he added. “Sustainability results when we grow our food close to home because it takes far less gasoline to ship a tomato from across town than it takes to ship it across the country,” said Henry. “Mostly, though, Minneapolis needs a city full of fruits and vegetables growing all around us so that the children that are raised in the city can connect with nature, health, and community by learning how to grow, harvest, and eat healthy food.” Giving Tree Gardens has pledged 50 trees to the project, and Urban Forage Winery has offered 100 fruit trees.

The food forest fills in a niche between community gardening and urban agriculture, pointed out Seibold. The key to making this work, he observed, is by educating and coordinating group efforts around different harvests.

“The people who show up most to understand the various plants and what fruits are in-season will also become teachers and stewards of the land,” Seibold said. “Networking with local organizations that donate food and make meals for the community will be important also. Connecting with local schools and restaurants will help bring the community together.”

Zeitler is one community member whose winery and cider making business links into community agriculture. “Mature apple trees usually produce more fruit than people can eat, and a lot of the fruit is small or misshapen, but it makes excellent cider,” he pointed out. “I’d like to be able to take the seconds from the apple orchard and juice the apples.” He is fascinated by the idea of greening the city and has been slowly integrating the principles of permaculture in his own yard.

“I think we’re seeing a movement toward urban agriculture because young people want to live in the city for better access to jobs and cultural opportunities, but also want to be connected to agriculture in some way,” said Zeitler. “We’re living in a not very dense urban area, built on some of the most fertile soil on earth, so I think Minneapolis and St. Paul are obvious places to practice urban agriculture. It makes me proud to see our cities becoming leaders in this!”

The seed for Seibold’s proposal began last summer when he attended a meeting held by the Minneapolis Parks and Recreation Board (MPRB) about budget shortfalls for projected park improvements for his local parks, Sibley and Hiawatha.

“After hearing about the funding gaps involved for even the basic improvements such as fixing paths and replacing old equipment, I started to think about how we could see our parks as more productive spaces by using nature as a guide,” explained Seibold. When he attended the September community meeting that revealed groundwater was being pumped from the Hiawatha Golf Course to make it playable in excess of what was allowable by the Minnesota Department of Natural Resources permit, he became convinced that an alternative land-use solution should be considered.

“My proposal is really interested in the intersection of land types—where upland, riparian, wetland, and shoreline and lake meet—because this is where there will be the most species diversity,” said Seibold. “This type of garden tends toward self-maintenance if good design and management practices are established.”

Inspired by the history of Lake Hiawatha, Seibold is interested in seeing wild rice grown again in the water body that was once called Rice Lake.

Henry agrees. “When this golf course was made we intentionally drained and destroyed a native food source called Rice Lake,” Henry said. “To grow equity, justice, and health I’d like to see us rebuild Rice Lake under the guidance of local native elders and fill the area around the lake with a community orchard for all to access.”

Seibold is happy to see MPRB collaborating with Minnehaha Creek Watershed District (MCWD) and the city of Minneapolis on this effort to determine what’s suitable for this land. A recent meandering of Minnehaha Creek in St. Louis Park has demonstrated how a little meander changes the whole feeling of the landscape, and shows that making the lake and creek better is a realistic goal.

“I believe the land has been informing us all along,” commented Seibold. “It’s unfortunate that major flooding events need to remind us of who’s in charge.” The back nine at the Hiawatha Golf Course has been closed since the 2014 flooding, and will remain so until MPRB determines the extent of the water issues at the site.

“Golf offers an amenity for folks and an opportunity to relax and recreate. Unfortunately, the entry cost for golfing equipment and the fact that golf is a European sport played almost entirely by middle-class and wealthy white men means that the space occupied by the golf course is only for the recreation of relatively few city residents,” stated Henry. “This golf course, in particular, is actually an ongoing environmental catastrophe due to the 275 million gallons of ground water that are being pumped out of the ground on an annual basis to maintain this golf course in what is a natural wetland area.”

Zeitler pointed out the environmental benefits of turning a golf course into a food forest. “Golf courses are notoriously chemically dependent,” he pointed out. “They use more water, fertilizer and pesticides than any other land use, due to the need to have very dense, green grass the entire season. It’s unsustainable, and I think it would be a good demonstration project for the city of Minneapolis to dedicate a portion of the resources that normally go to a golf course, and instead spend them on a food forest.”

MPBR not focusing on alternate uses

MPRB is currently focused on the water issues at the golf course and is not exploring other uses, according to Commissioner Steffanie Musich.

“As we are still researching the groundwater situation at Hiawatha, and what impact existing conditions will have on the course and its use for playing golf, exploring alternate uses for the parkland the course occupies is not underway at the park board,” she said.

She did point out that MPRB has been talking about ways to incorporate agriculture throughout the city, and the new Urban Agriculture Activity Plan (and related South Service Area Master Plan) can be viewed online or at a number of open houses being held in December (see story elsewhere). Within the plans is a pro­po­sal to located a community orchard at Adams Triangle in Longfellow.

Seibold is currently collaborating with a hydrologist professor at the University of Minnesota, whose spring 2016 class “Environmental Problem-solving” hope to look at the technical/ecological opportunities and constraints of implementing a food forest.

His son’s school, Northrop Elementary, an urban environmental learning center, is just a few blocks away from Lake Hiawatha. “I would love to see a growing connection between our kids’ learning environments, urban forests, and how we can start seeing abundance in our own backyards, whether it is a local park, your kid’s school grounds, or our backyards,” said Seibold.

In the next few months, Seibold intends to organize a Participatory Design Workshop and invite community members. The tentative date for the workshop is Sat., Feb. 27. “My hope is to get people really excited about the project, have a little ownership of the idea, and to encourage folks to start thinking about their parkland differently—not as something that needs constant upgrade, but as a place that has unlimited growing potential,” said Seibold.

Guardians of our freshwater

Will Lake Hiawatha be reduced to a holding pond?