Fire Chief Bryan Tyner says it isn’t just women who stand on their shoulders. “We all stand on your shoulders.” 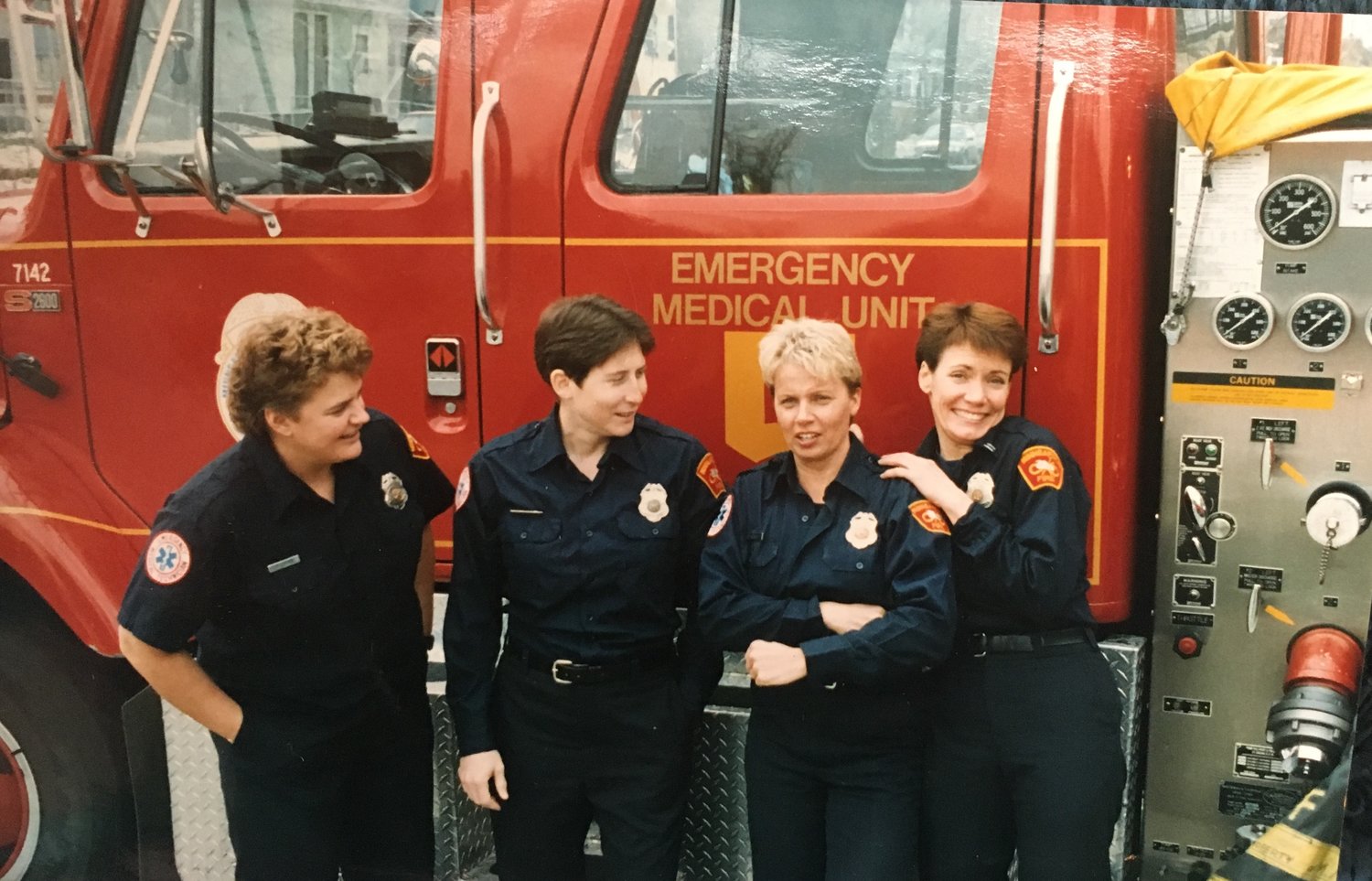 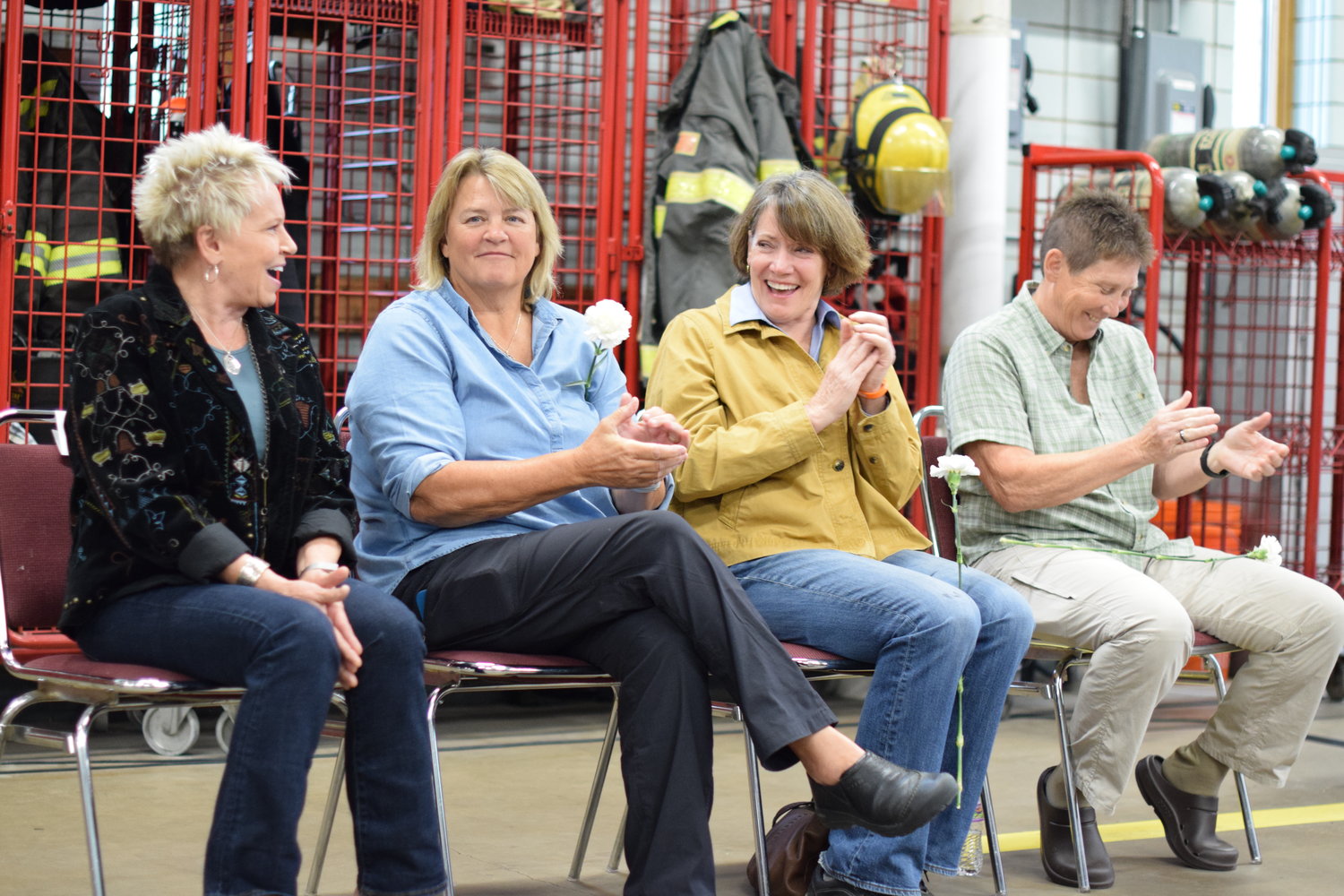 Vicki Hoff, Mary Mohn, Jean Kidd and Bonnie Bleskachek share laughs and stories as they are recognized on the 30th anniversary of their service as Minneapolis’ first all-women fire crew.
Jill Boogren 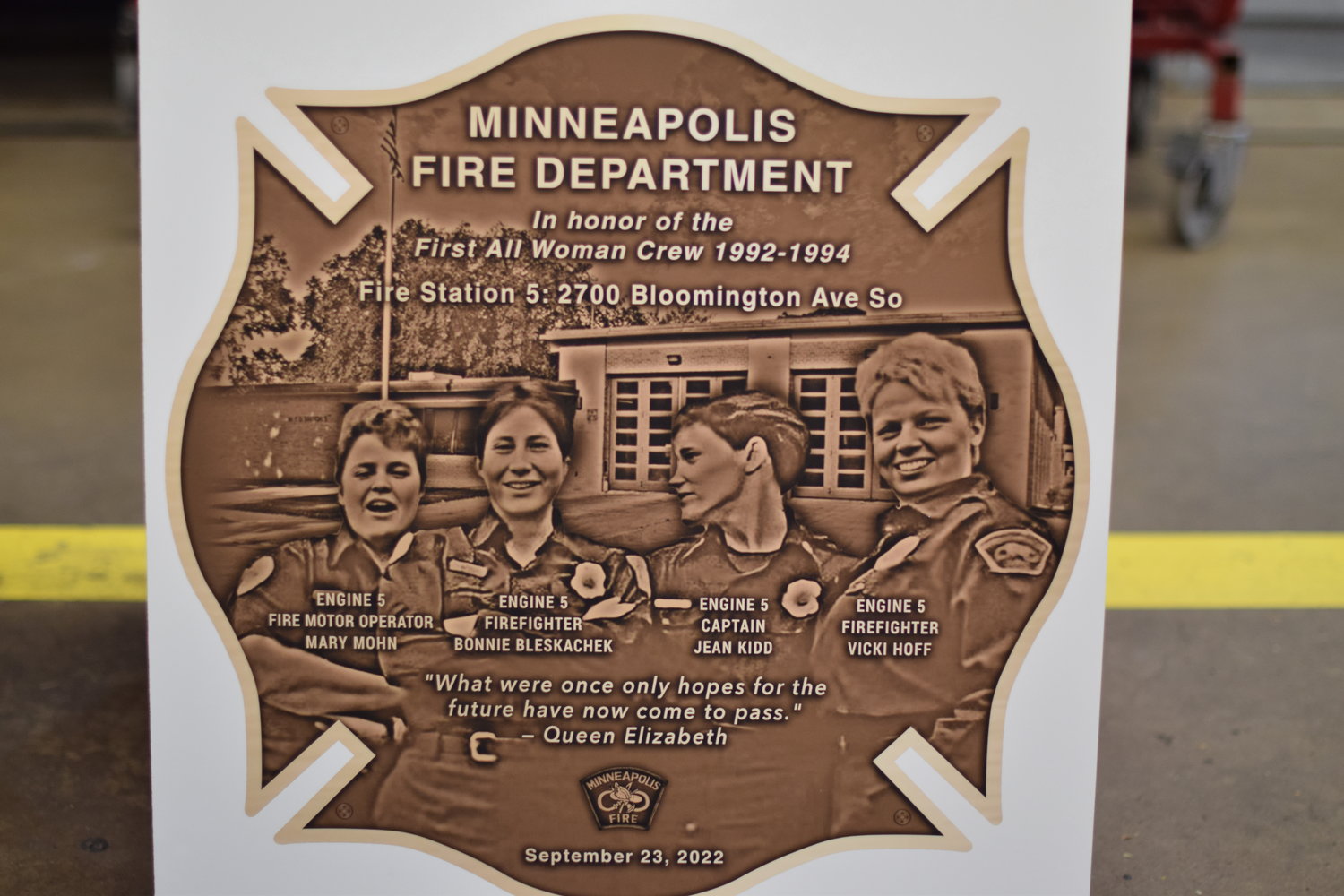 The plaque commemorating the city’s first all-women fire crew who served together from 1992-1994 will be placed outside the entrance of Fire Station 5.
Jill Boogren 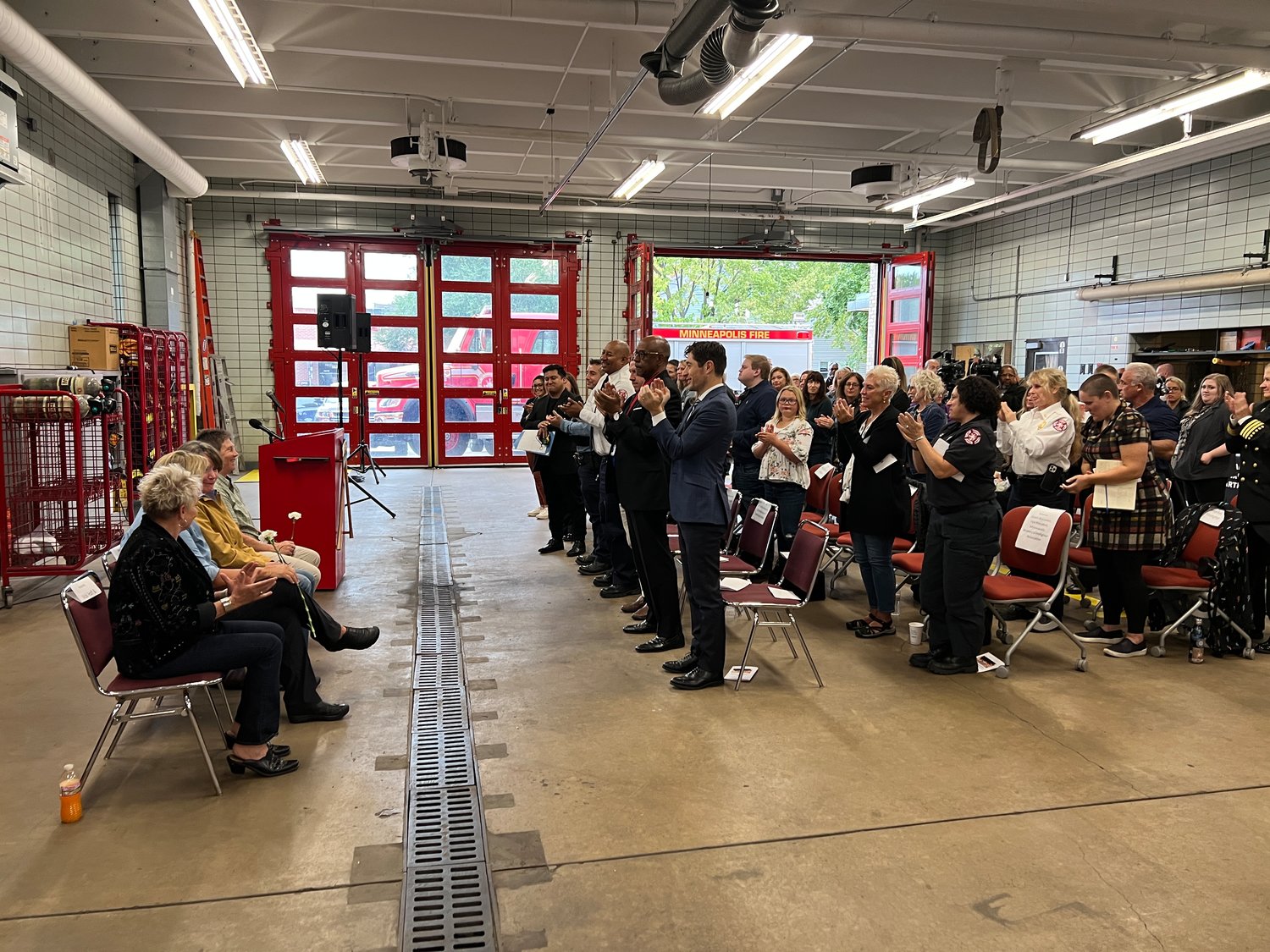 The four members of Minneapolis Fire Department’s first ever all-women crew receive a standing ovation at a Sept. 23, 2022, event commemorating the 30th anniversary of their time serving together.
Jill Boogren 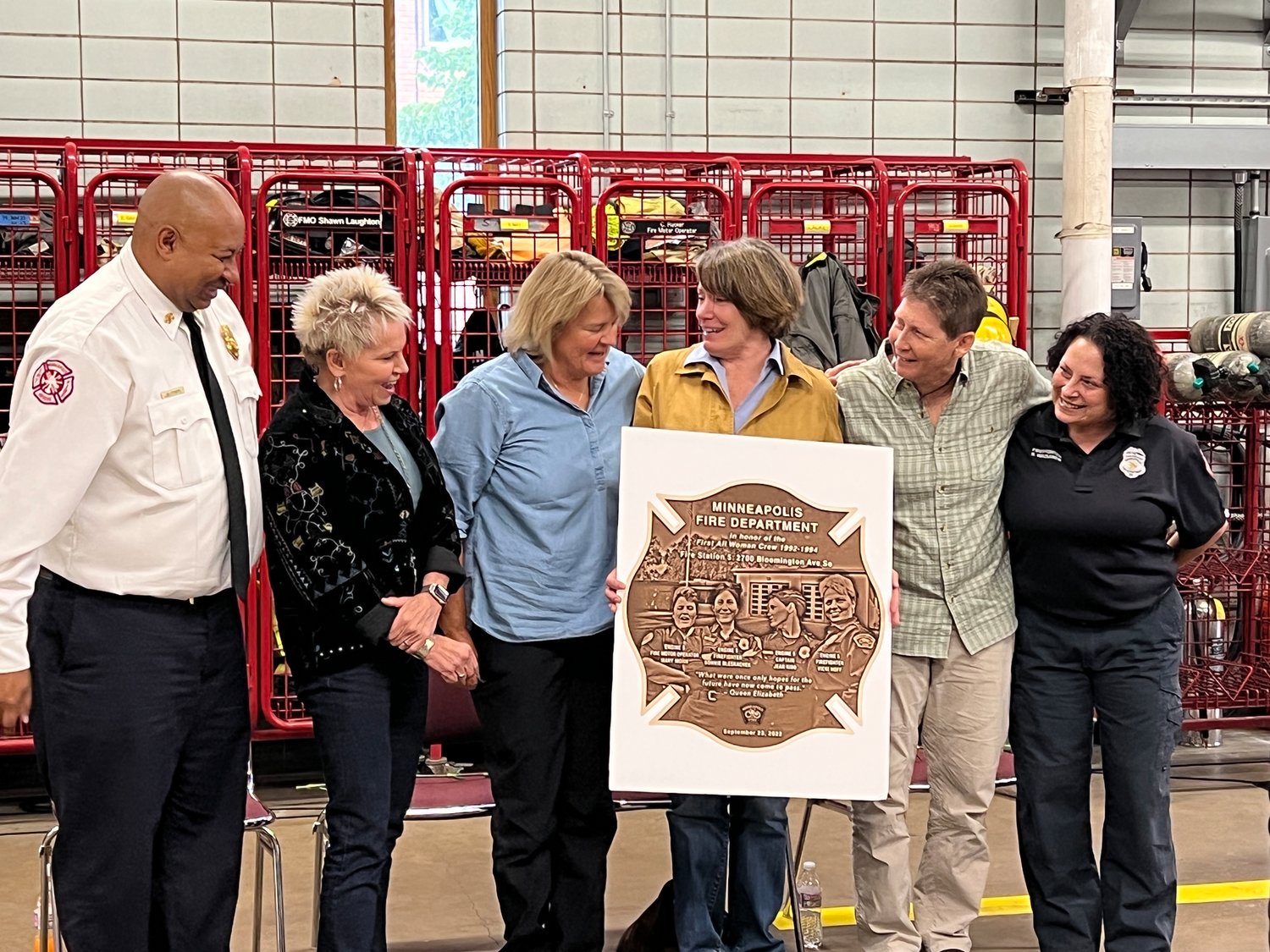 The first woman was hired as a firefighter for the Minneapolis Fire Department (MFD) in 1986, more than 100 years after the department was founded. Among those early hires were these four women, who joined the department in the 1980s. From 1992-1994, they worked together as the crew on Engine 5. Now retired, they were recognized as trailblazers in the field.

“For them to step in that role and take that courage to be the first, to go through the struggle of being the first… being the first is not easy,” said Assistant Fire Chief Melanie Rucker, the event’s emcee. “So we commend these women. And not only did they come onto the department, but they blazed the trail through the promotional ranks, as well.”

“Two of [the women] never took a promotional test that they did not test number one in,” said Mullen, to applause. “These women didn’t just have to be good. They had to be the very best. And then some.”

High-ranking officials in the department spoke to the barriers women faced. Rucker said it took a lawsuit to get the then all-White-male department to include minorities and women. And that was just to hire them.

Mullen didn’t pull any punches about one of their biggest obstacles. “Let’s keep it real,” she said. “The reason this all-woman crew formed is because when Jean Kidd was made captain there were no men that would work with her. So think about that reality.”

Deputy Fire Chief Rita Juran spoke of the significance of this crew opening up the space for other women.

“The path these women created has been marched by many women throughout the years. They helped open the door, proving that women could be competent firefighters and competent leaders,” she said. “These women did not just toe the line, they have excelled, allowing others to excel.”

Sherri Waisanen, president of the Women’s Firefighter Association who has been a firefighter for nearly 23 years, said she’s been on an all-women crew for about four or five years. She described her captains as having their own way of being strong, demanding and forceful – both on the scene and in the firehouse.

“It’s been a refreshing change from earlier in my career,” she said. “We get things done, just like the others on other rigs. Except we’ll get that surprised look from people on the streets when we take our helmets off and step off the rig and [they] see all women.”

The number of women in the fire services has dwindled in recent years, however.

In 2002, the MFD included 70 women, 15% of the department. That was their heyday, and MFD was considered a world leader. Today, the number of women is about half that and falling. According to Waisanen, about a third of the women now in the department will be retiring within five years.

A resolution read by Ward 9 City Council Member Jason Chavez states that MFD is on a trajectory to fall below the nationwide four percent of career firefighters who are women – a trend many of the higher ups vowed to reverse.

Juran said inclusion and acceptance come with numbers. Numbers in diversity create balance and equity, which in turn provide a healthy environment where all can thrive.

“This might sound funny, but we need to hire a number of women so we can stop counting the women,” she said.

And, as several people reiterated, representation is key.

“You have to see someone who looks like you to understand that it’s a possibility for you,” said Mullen, who extended that beyond gender to include the Somali, Hmong and Hispanic communities, as well.

As Rucker put it during a Q&A the previous day, “You see it, you can be it.”

Fire Chief Bryan Tyner and Waisanen presented a plaque that contains an image of Mohn, Bleskachek, Kidd and Hoff posing together during their time on the crew.  “A lot of people have remarked on how the women in this job stand on your shoulders. But the truth of the matter is, that we all stand on your shoulders. We’re a better department because of it,” said Tyner.

The plaque will be posted on the outside of Fire Station 5.