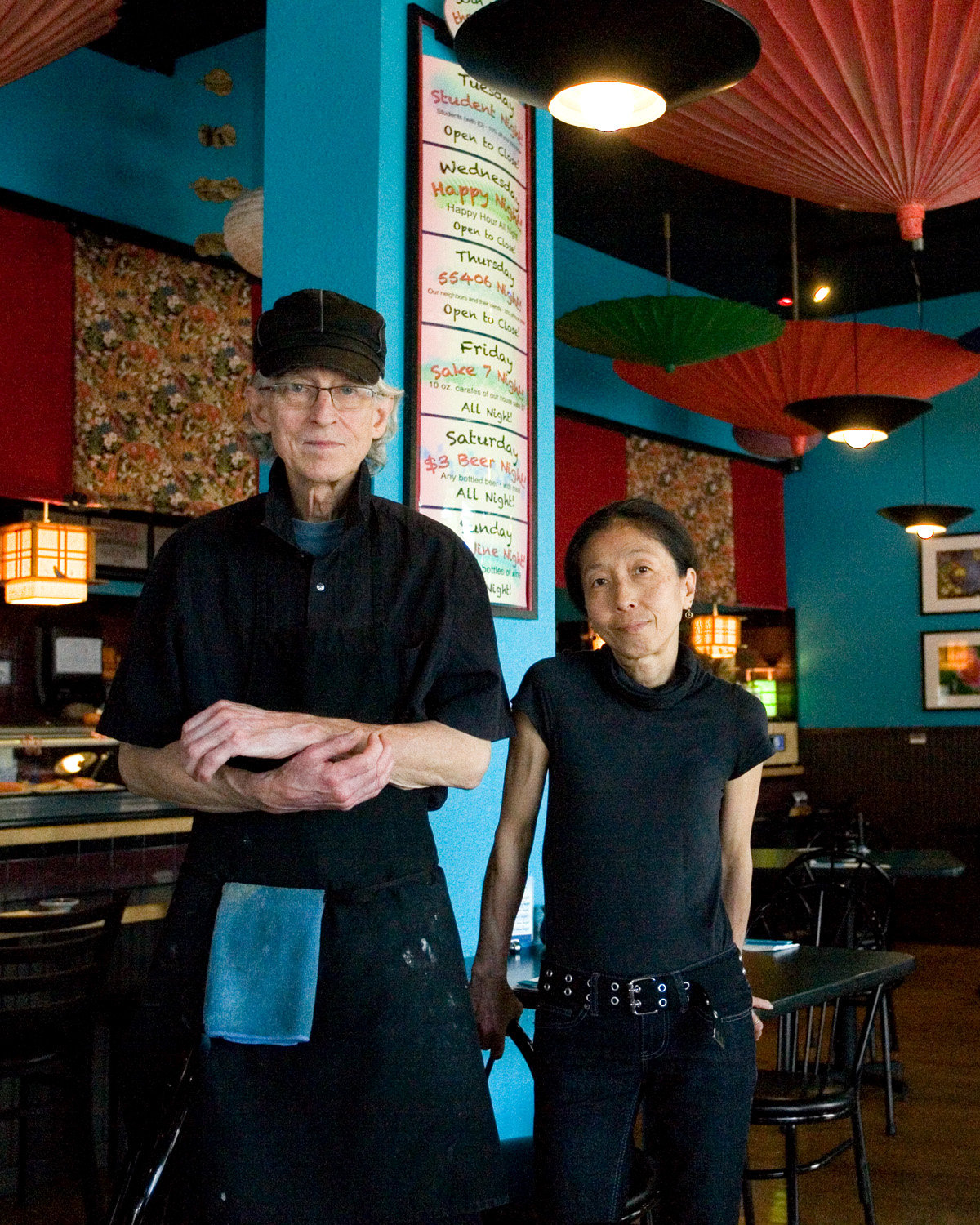 Midori Flomers (right), originally from Nagasaki, Japan, and John Flomers (left) originally from Brooklyn, N.Y., pictured in their former restaurant. They will be re-opening in a new Longfellow location as soon as they are able. In the meantime, find their take-out at the Seward Café Friday through Sunday evenings until further notice. (Photo by Margie O’Loughlin)
Posted Wednesday, June 30, 2021 9:37 pm
By MARGIE O’LOUGHLIN

Midori and John Flomers, longtime proprietors of Midori’s Floating World Café at 2629 E. Lake St. in Longfellow are serving Japanese take-out from a temporary location: the Seward Café at 2129 East Franklin Ave.
Many of their signature menu items are available Friday through Sunday from 4-8 p.m., including tempura appetizers, sushi, rice bowls, ramen and more.
Midori said, “It’s very different preparing meals in a temporary kitchen. We’ve always been focused on sit-down dining with a certain ambience, but this is an interim arrangement. The Seward Café has been closed since the start of the pandemic. Our own restaurant at 27th Avenue and East Lake Street was heavily damaged in the uprising last spring, and we will not be reopening in that location. Until we can secure a new permanent space, we will continue offering take-out here.”
Midori’s Floating World Café opened in 2003, and has always had its roots in Longfellow. The first location was in a portion of the former Gandhi Mahal Restaurant; a few years later, the couple moved their business into a larger space across the street.
Ultimately, that space started to feel too big for their changing needs. John said, “Wherever we land next, we need to pare down our operation. I have limited use of my hands now due to arthritis. Midori makes all of the sushi and I run the kitchen.”

A possible new location
Midori and John, with the help of Redesign Inc., are currently negotiating a lease on the former Subway Restaurant at 35th Ave. and East Lake Street. John said, “It hasn’t been finalized yet, but we’re hopeful. The seating area is about 20% smaller than what we had, which would meet our downsizing goal.”
The couple has lived in Longfellow for more than 20 years, and the tremendous community support they’ve received for their restaurant confirms that this is where they belong.
Midori said, “Our customers really loved what we had. Their support kept us focused on what was positive. This is the second disaster our business has experienced. When our restaurant flooded in 2013, Redesign Inc. and the Lake Street Council were both banging on our door asking, ‘How can we help?’ They were the same through this.”

Time to move forward
Through the Lake Street Council, Midori and John received a $15,000 grant to replace destroyed inventory and apply toward reopening their next restaurant. The “We Love Lake Street” grant fund has raised $12 million from more than 80,000 donors around the world, and helped hundreds of business owners deal with losses.
In addition, a GoFundMe campaign started by a former Midori’s employee generated almost $60,000. A fundraiser organized by St. Albert the Great Catholic Church helped, too. John said, “The grassroots community support has gotten us through.”
Midori added, “The city of Minneapolis gave us a reduced price when we renewed our commercial license, because we were unable to do any business from June 2020 until January 2021 when we started at the Seward Café.”

Reopening, recreating, rehiring
For the time being, it’s just Midori and John preparing take-out meals at the Seward Café. When they open the next iteration of Midori’s Floating World Café, they will be starting from scratch in almost every way.
They were able to save some of the décor before their restaurant was vandalized last May. Midori said, “We have parasols and paper lanterns all over the house, and in a storage locker right now too. We can make the new space, wherever it will be, peaceful and beautiful again.”
As for staff, they’ll be reaching out to old employees first – but it’s likely most people have gotten different jobs by now. John explained, “We’ll be paying the new minimum wage. We’re interested in working with warm, friendly people. Before the uprising, we had very little turn over.”
To inquire about employment or to place an online order for take-out from Midori’s Floating World Café at the Seward Cafe, visit www.floatingworldcafe.com.