Minnehaha Townhomes expected to be occupied within a month 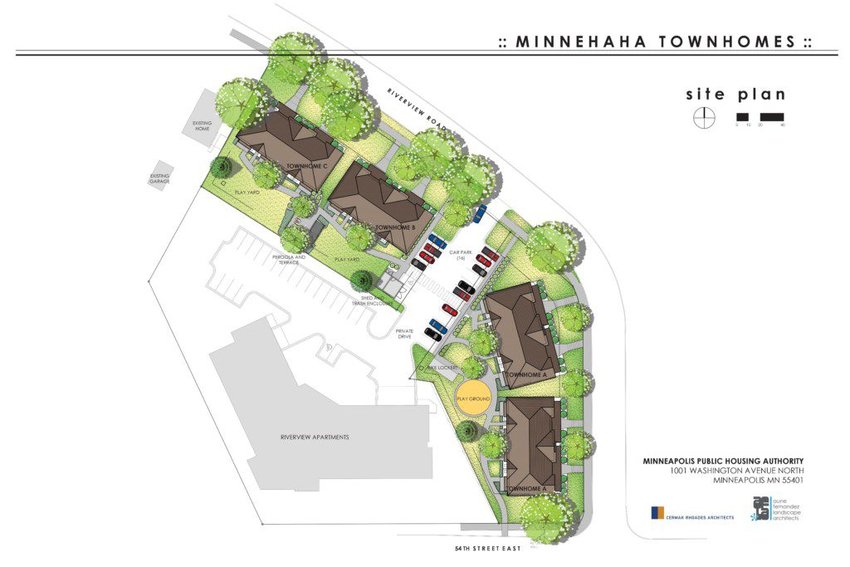 Sixteen new townhomes are housed in the four new buildings. The total cost of the project was approximately $5 million. (Illustration provided)

The Minnehaha Town­homes are owned and managed by MPHA and families come as referrals from the Hennepin County shelter system. Families began moving in at the beginning of March and MPHA anticipates full occupancy by the end of the month.

The four buildings revitalize a long-vacant site in the East Nokomis neighborhood, donated by the City of Minneapolis. The townhomes include four two-bedroom and 12 three-bedroom units reserved for families below 30 percent of area median income. 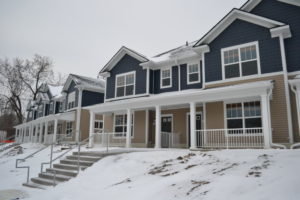 “These 16 new units are opening as we embark on our long-term plan to preserve and expand MPHA’s housing across the city,” said MPHA Executive Director Greg Russ. “They also show the level of quality, sustainability, and household amenities we can provide to families when we construct modern public housing.”

Hennepin County’s Coordinated Entry process is designed to ensure that individuals and families with the highest vulnerability, service needs, and length of homelessness receive top priority in housing placement. The townhomes are helping to fill a gap in the process, as 70 percent of families that are eligible for Coordinated Entry are waiting for permanent supportive housing—sometimes spending up to a year in the shelter system.

“This is really a dream project for us as far as needs go,” said Hennepin County Housing Referral Coordinator Sarah Hunt. “For the families that we have been able to refer, it directly correlates with a population that we were unable to send to other housing. The unique nature of these affordable units paired with services is exactly what has been identified as an ongoing need.”

The families who live at the Minnehaha Townhomes receive services from the county and several rapid rehousing providers, offering intensive case management up-front to help families get oriented to the area, assistance with basic housing needs, referrals for ongoing needs, and more.

“The families who have been identified have not had any other options, and for them it’s a big boost,” said Hennepin County Shelter Team Supervisor Pat Hartnagel. “It’s amazing to see the things they’ve worked through and accomplished, purely because of the hope to have this housing.”

The broader impact of this housing is being felt for the Hennepin County team already. “It’s one thing to have 16 units open up and allow stability for families to have a place to call home, but it’s also directly opening up spaces in emergency shelters for other families in crisis,” said Hunt.

The site on Riverview Rd. includes a playground, ample green space, and community patio. The townhomes are located on the Blue Line light rail between two major job centers—Downtown Minneapolis and Bloomington/MOA/MSP. They are walking distance to the VA Medical Center and Minnehaha Regional Park.