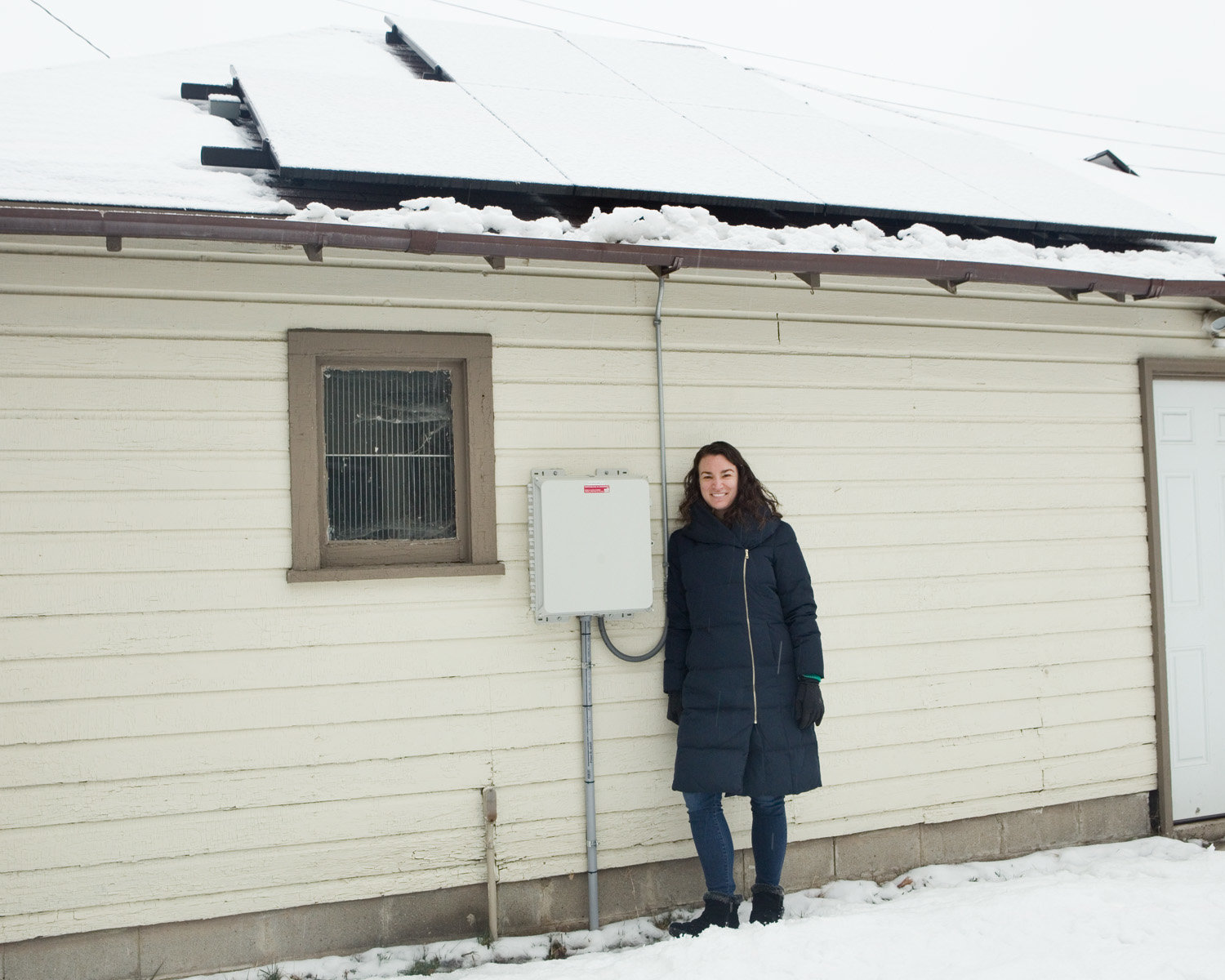 South Minneapolis homeowner Kelly Muellman installed solar panels on her garage in 2018, as a member of an earlier group of Twin Cities Solar United Neighbors. She said, "Being part of a co-op was great. Our neighbor group reviewed several bids from installers together, and chose the one we thought had the best reputation, warranty, and price." (Photo by Margie O’Loughlin)
Posted Wednesday, January 27, 2021 10:02 pm

“I’m excited by the incentives available to homeowners, and especially to low-income residents. Many will be able to go solar through this co-op.””
~ MNIPL Solar Outreach Manager Buff Grace
Nonprofit solar group

Solar United Neighbors is a nonprofit organization that works in Minnesota and nationwide to represent the needs and interests of solar owners and supporters. Solar co-ops are part of the organization’s mission to create a new energy system with rooftop solar at the cornerstone. Solar United Neighbors holds events and education programs to help people become informed solar consumers, maximize the value of their solar investment, and advocate for fair solar policies.

For home and business owners in the Twin Cities metro area who have been considering installing solar panels, there are two affordable reasons to go solar now.
Solar United Neighbors is a national non-profit organization that has spearheaded solar cooperatives in 11 states and the District of Columbia. Their newest venture is the Twin Cities Region Solar Co-op, which will make it possible for residents and business owners to go solar together for competitive pricing and installation.
In addition, COVID-19 relief legislation has extended the federal solar Investment Tax Credit. It was previously set to end at the end of this year. However, with the new legislation, the tax credit will remain at 26%, which would help co-op members save even more on their investment.
“The co-op will enable Twin Cities homeowners and business owners to join the growing community of people saving money by harnessing solar power,” said Bobby King, Minnesota program director for Solar United Neighbors. “Together, we’re building a movement to transform our electricity system into one that is cleaner, fairer, and shares its benefits more broadly.”
The co-op is open to residents and businesses in the Twin Cities and surrounding metro area. The application deadline is March 1, 2021.
“I’m excited by the incentives available to homeowners, and especially to low-income residents,” said MNIPL Solar Outreach Manager Buff Grace. “Many will be able to go solar through this co-op.”
“Rooftop solar means more clean renewable energy, more local energy and more distributive energy. It also means local jobs. This is all part of the new energy system we need to keep moving forward in our state,” said Rep. Jamie Long (D-Minneapolis), incoming Chair of the House Energy and Climate Finance and Policy Committee. “I am glad to see SUN’s solar co-op making this possible for more folks.”

Become electricity producer, not just consumer
According to King, the motivator for most people in the co-op is simple. They want to be more hands-on about producing clean power on their own property.
One of the first benefits new co-op members receive is a roof assessment. This is done virtually, and takes several factors into account – starting with exposure. A north-facing exposure will not work for solar panels. South-facing is best, but east and west can work in some situations. There should be no shade, and there has to be sufficient space to mount the panels (meaning no dormers or skylights.)

A solar primer
The average roof-mounted system ranges from 2-12 kilowatts. Power is measured in kilowatts; one kilowatt equals 1,000 watts. Solar United Neighbors co-ops use photo voltaic (PV) systems. PV cells embedded in the solar panels convert sunlight into electricity.
King explained that solar panels are very low maintenance – as they have no moving parts. They clear themselves of snow, thanks to gravity, and have gone down in price approximately 50% since 2010. Most solar panel systems last 25+ years, and typically come with a 25 year guarantee. They will more than pay for themselves over the life of the system.

Co-op membership
The Twin Cities Region Solar Co-op is free to join. It is open to homeowners and business owners in the Twin Cities and surrounding metro area. Together, co-op members will learn about solar energy and leverage bulk purchasing to ensure competitive pricing and quality solar installations. After a competitive bidding process facilitated by SUN, co-op members will choose a local solar company to do their installs.
Joining the co-op does not obligate members to purchase solar panels. Instead, members have the option to individually purchase panels and electric vehicle chargers based on the installer’s group rate.
Other local energy groups partnering with Solar United Neighbors in the creation of the Twin Cities Region Solar Co-op include the city of Minneapolis Sustainability Division, Climate Generation, Environment Minnesota, Minnesota Interfaith Power and Light, and the Minnesota Renewable Energy Society.
Anyone interested in going solar can sign up for the co-op or watch Solar United Neighbor’s information session on the co-op webpage at www.solarunitedneighbors.org/twincities. This session covers basic information necessary to make an informed decision.
There will also be a free virtual information session on Tuesday, Feb. 9 at 6:30 p.m. Register for the interactive ZOOM presentation at: https://coops.solarunitedneighbors.org/coops/twin-cities-region-solar-co-op/events/.
Solar United Neighbors has hosted 11 solar co-ops in Minnesota since 2017. According to the group’s estimates, the 76 Minnesota homes and businesses that now have solar panels through its co-ops represent 544.2 kilowatts of solar power, $1.8 million invested in the local economy, and 20 million pounds of lifetime carbon offsets. A carbon offset is a reduction in emissions of carbon dioxide or other greenhouse gases made in order to compensate for emissions made elsewhere.