Nine months in: where’s the city on police reform? 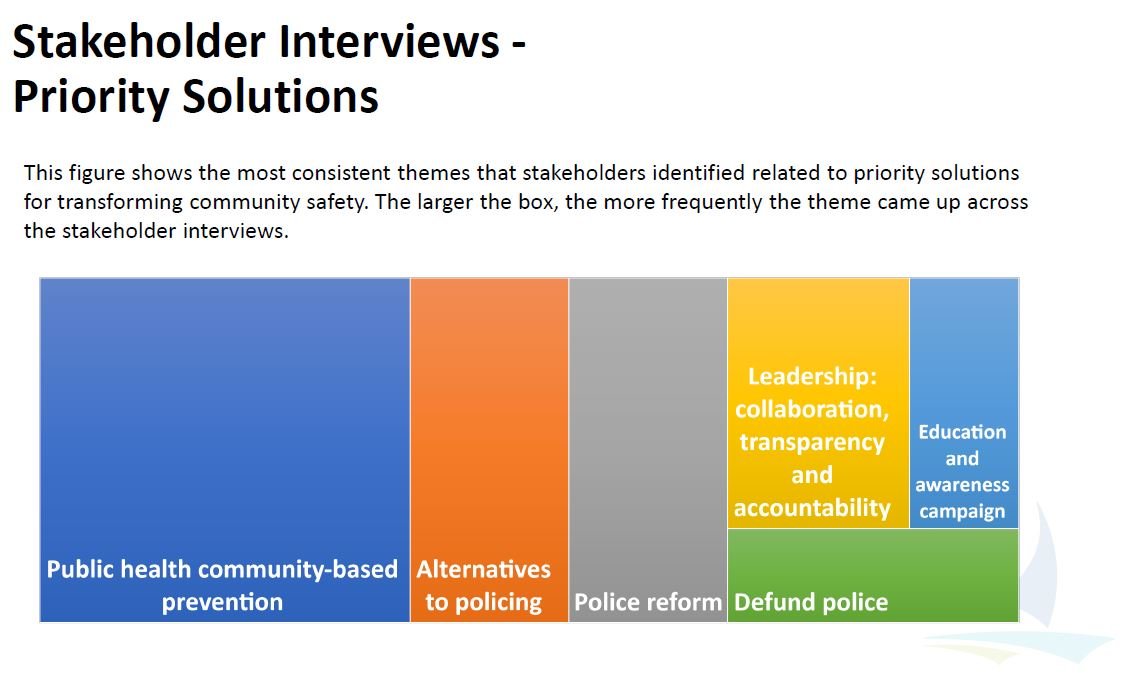 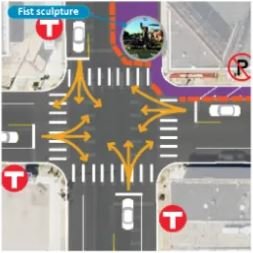 city of Minneapolis design options for the intersection at 38th St. and Chicago Ave. Option 1 relocates the fist north on Chicago. Option 2 creates a roundabout around the sculpture. Each option preserves as public space the site where George Floyd took his last breath. This is option 1. 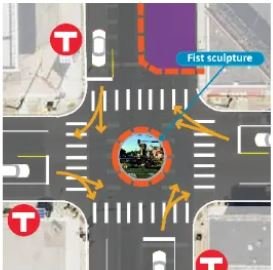 city of Minneapolis design options for the intersection at 38th St. and Chicago Ave. Option 1 relocates the fist north on Chicago. Option 2 creates a roundabout around the sculpture. Each option preserves as public space the site where George Floyd took his last breath. This is option 2. 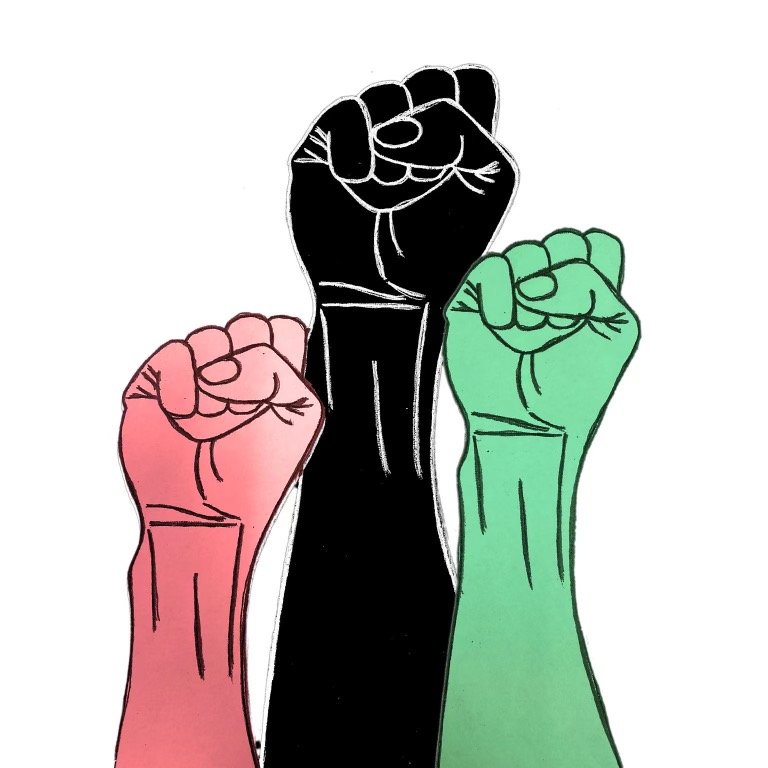 People are invited to show support for George Floyd Square and the 24 demands for justice outlined in Resolution 001 with a “No Justice No Streets” yard sign. Featuring artwork by Kenneth Caldwell, signs can be reserved at bit.ly/GFS_YardSigns and will be available the first week of March. 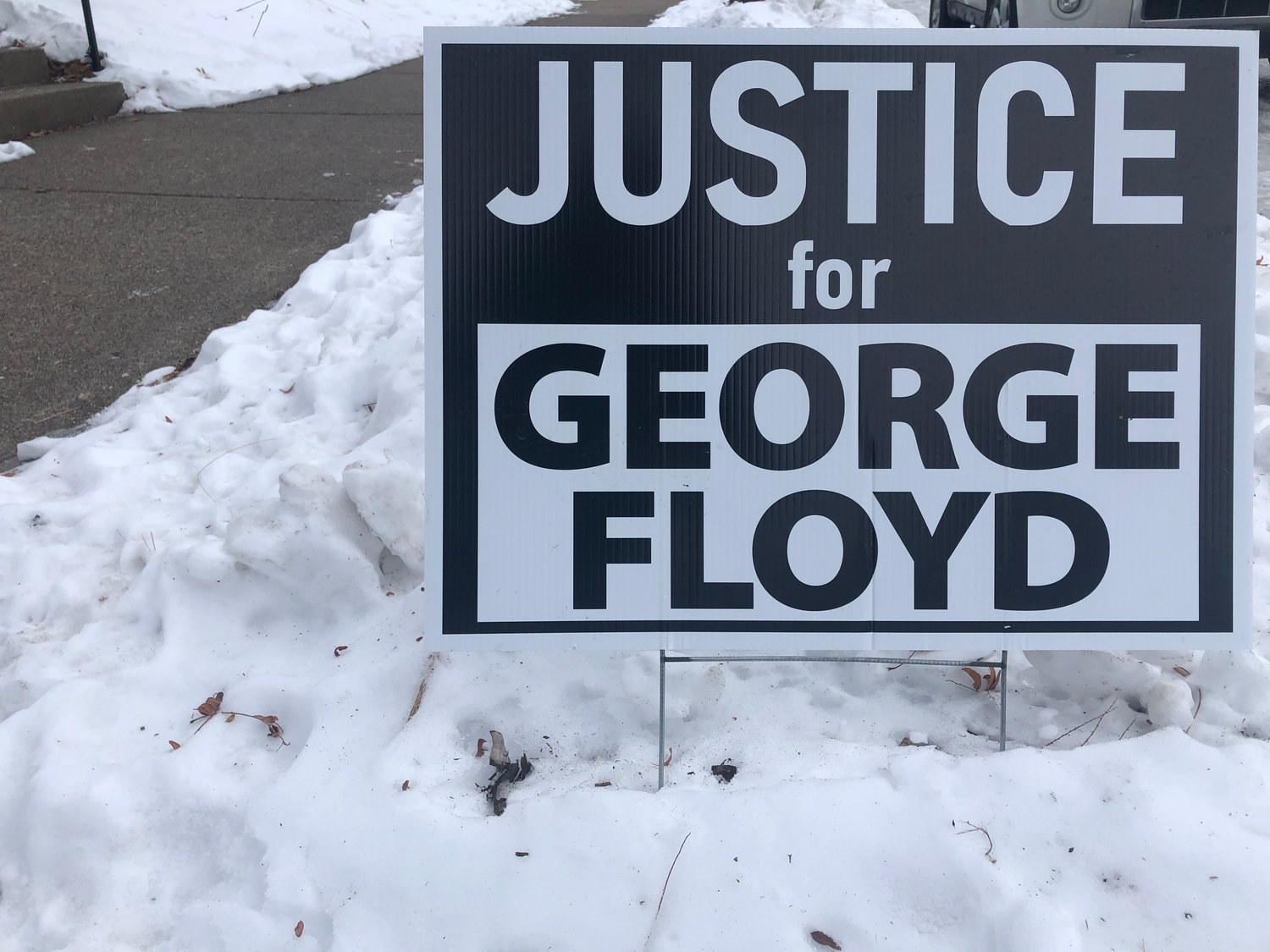 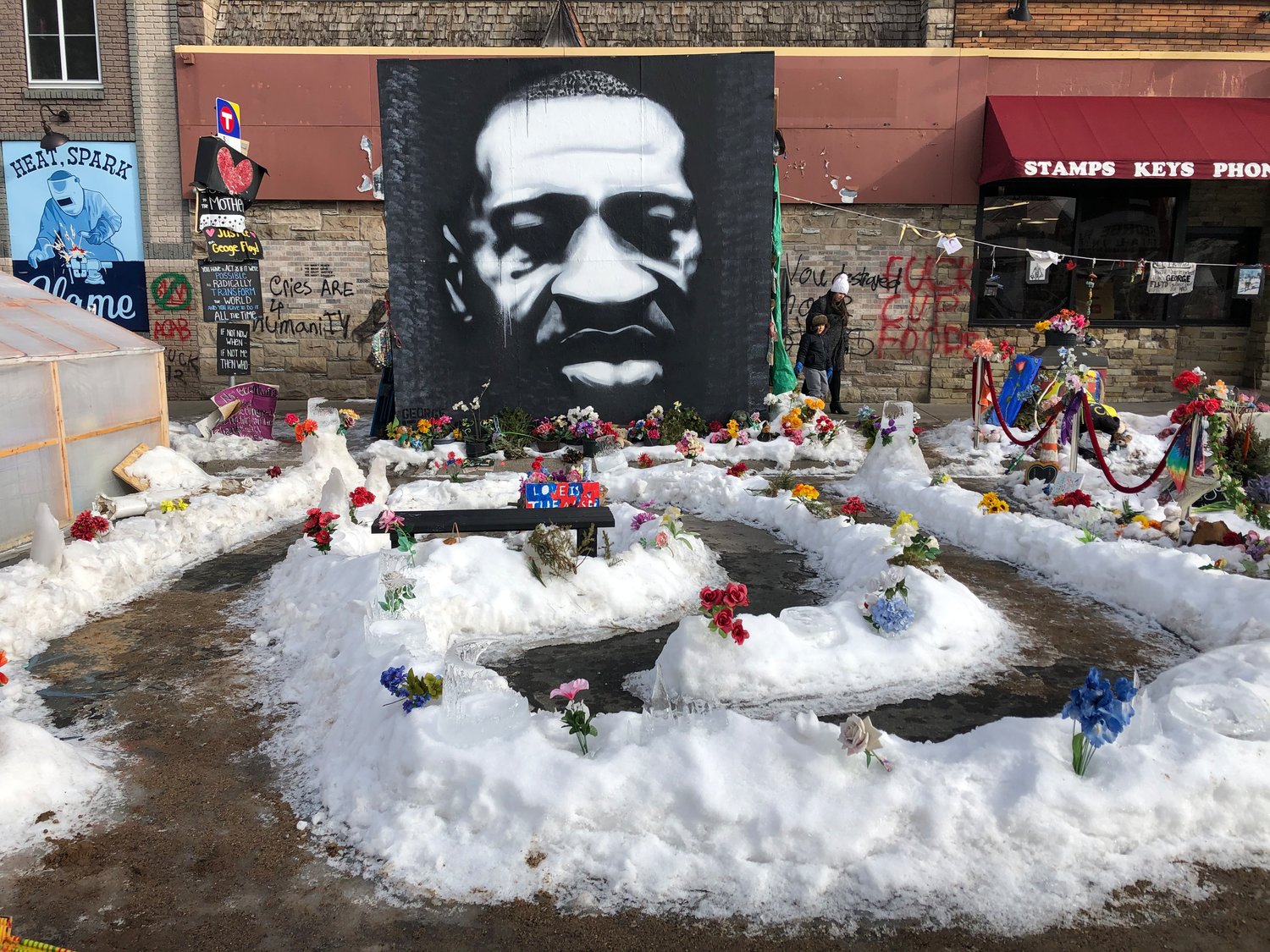 In June 2020, two weeks after George Floyd was killed by Minneapolis police sparking a global uprising, nine city council members stood on a stage above huge, bold letters that spelled “DEFUND POLICE” and pledged to a crowd of thousands at Powderhorn Park a year-long commitment to reimagine public safety. The next day, Mayor Jacob Frey called “for massive, structural and transformational reform of a police department that has failed Black and Brown people for generations.”
Change was coming.
Now nine months later and mere weeks before Derek Chauvin’s trial begins, what, if anything, has changed?
“Nothing has changed that would change the conditions that led to Derek Chauvin putting his knee on George Floyd’s neck,” said Michelle Gross, co-founder of Communities United Against Police Brutality (CUAPB). “We were the epicenter of police protests for this country and our city has not managed to change one single thing that would prevent another George Floyd.”
With two decades of research and advocacy work in police brutality and police accountability, Gross knows a lot about best practices and steps that can be taken to move in a better direction. First and foremost is to change the culture within the department.
“It’s job one of the top leaders of any organization in managing the culture of that organization to outline what they expect,” said Gross. “You have to address the conduct that you don’t want to see, and you have to reward the conduct you do want to see.”
This means the police chief has to be serious about discipline, and sergeants and lieutenants – the others in charge - need to be trained to be good managers, according to Gross. Better practices also need to be in place so that when something goes into arbitration, discipline sticks. The vast majority of disciplines don’t stick, which, as Gross pointed out, is often due to poor documentation, failure to engage in “progressive discipline” (clarifying each next step if an employee fails to correct a problem) and inconsistency. To ensure discipline is upheld, Gross calls for implementing a "disciplinary reset," in which the chief effectively says, “From here on out, this is the way things are going to be.”
After George Floyd was killed, CUAPB published a set of actions, including the above, that could be immediately taken by the mayor and city council to improve policing and hold officers accountable. One recommendation is to downsize MPD and redirect the funds to more appropriate responders. This is in keeping with preliminary findings from the city’s Community Safety survey, in which respondents believed by the highest percentages that someone other than the police should respond to people experiencing homelessness (85%) and mental health crises (79%).
Another is to implement an early intervention system to address problem officers early. “Such a system would have flagged Derek Chauvin long before he had the chance to kill George Floyd and would have prevented the department from using him as a training officer,” reads the document.
Bystander intervention training could also be implemented to enable officers to step in and prevent their partner - even when it’s a supervisor or senior officer - from doing something “harmful or career ending.”
And new civilian oversight could be created that would replace the current Office of Police Conduct Review. According to data collected by CUAPB, of 3,133 community complaints over an eight-year period, just 13 were disciplined – a rate of less than one half of one percent, much, much lower than the national average of 7-8%.
These are just a few of the actions CUAPB recommends the city take. CUAPB also published a detailed document, endorsed by nine local coalition partners, outlining 44 reforms the city and state could take to end police violence. These documents are posted on their website at cupab.org.
Another coalition, Yes 4 Minneapolis, just started a petition to amend the City Charter to replace the police department with a public safety department (see people’s petition article on page 1).
“Here’s the deal. There are a lot of different groups working on police accountability issues. We don’t necessarily all agree on how to get things done. The bottom line is something has got to get done,” said Gross. “We cannot continue to operate the way we have been. It’s just not tenable.”

Engaging community
Many months after their declarations of transformational change, the city has now begun its process of engaging community.
The first attempt at citywide outreach began in November, with the aforementioned online Community Safety survey and a requested turnaround time of just a few weeks. Due to low participation, especially among Black, Indigenous and People of Color respondents, survey availability has been extended through the end of March.
Interviews are also being held with stakeholders and focus groups. According to Jennifer White, community and interagency engagement manager in the Office of Violence Prevention (OVP), about 200 participants have been engaged during the first phase of this outreach. Some priority solutions were identified in these interviews, with the top three being public health community-based prevention, alternatives to policing, and police reform.
Though not part of the city’s community engagement process, CUAPB held five outdoor, socially-distanced public meetings of their own (the city now has a meeting-in-a-box option for groups to conduct their own sessions and submit results) and are still soliciting community feedback through their People’s Floyd Commission Testimony (available on their website).
The OVP Transforming Community Safety process will continue their outreach and then make suggestions available to the public for feedback in May. This will in turn inform recommendations that will go to city council members in July. According to OVP Director Sasha Cotton, these will not be specific policy recommendations.
“We’re going to give them information to inform their policy decisions, but we’re not going to tell them what the policies should be,” she said.
An online informational meeting will be held March 2 at 6 p.m. (details are on the city calendar). Cotton encourages people to get involved: check the website (www.minneapolismn.gov/community-safety/), take the survey, and use the meeting-in-a-box toolkit to conduct a meeting.
“We really want as wide an array of opinions as possible,” said Cotton. She expects conversations to continue after recommendations are published this summer. “This has to be an ongoing conversation. This is the biggest, most important thing the city is doing right now. It can’t be shrunk down.”
As part of this process, the city is also researching measures that have been implemented elsewhere in the country.
Some cities are taking bold actions. USA Today reported that the city of Denver, Colo., sent mental health professionals instead of police officers to hundreds of calls during the last half of 2020, a program they plan to expand for 2021. The Austin City Council in Texas voted on Feb. 4 to use funds from the police budget to purchase a hotel that will provide permanent supportive housing for people experiencing homelessness. And just over the river, the St. Paul City Council passed a resolution in January to create a reparations commission to help address equity and wealth disparities faced by Black residents.

Not going back to normal
Meanwhile in Minneapolis, as the world watches for sweeping change, Mayor Frey and city leaders turned their attention to a single intersection. They called a press conference on Feb. 12 to announce plans to reopen the intersection at 38th and Chicago after the Derek Chauvin trial. They are issuing another survey, this one to residents and businesses in the immediate neighborhood to find out which of two design options they prefer – each one keeping the iconic fist sculpture.
“We are not going back to normal at that intersection,” said Mayor Frey, stating that it should remain a center for racial healing and justice. City leaders promised a $10 million investment in the neighborhood and referenced a workforce center focused on youth, although no specifics were given.
The mayor repeatedly promised “enhanced” or “robust” city services but offered no specifics as to what would be improved, nor examples of access having been impeded. In terms of emergency response, Police Chief Medaria Arradondo said that “it’s obviously better to have an intersection that’s widely open,” but he did not suggest that access to the intersection has been prevented. In fact, a widely shared video from Feb. 1 shows three squad cars speeding around the fist sculpture in pursuit of a vehicle. Another shows a dozen squad cars that had entered the Square in December, allegedly in pursuit of a person on foot.
Interim Public Works Director Brette Hjelle said public works has been providing services since last spring, including traffic signs and barricades, while preserving emergency and service vehicle access.
“We have been providing regular solid waste services to the memorial area and to the homes in the area, and we’ve also been providing snow and ice control this winter,” said Hjelle. “Services will continue.”
“All they can talk about is taking down the barricades at George Floyd Square,” said Gross, in a conversation prior to this press conference. “Not address community concerns that caused the barricades to be put there.”
Community members at George Floyd Square, meantime, continue to Meet on the Street twice daily, at 8 a.m. and 7 p.m. On Feb. 21, they held an event commemorating Malcolm X along with a “GFS Liberation Loppet” in honor of Arctic explorer Matthew Henson. A Global Day of Prayers for Justice for George Floyd and Black Liberation will be held on March 8, the day the Chauvin trial begins.
People are invited to show support for George Floyd Square and the 24 demands for justice outlined in Resolution 001 with a “No Justice No Streets” yard sign. Featuring artwork by Kenneth Caldwell, signs can be reserved at bit.ly/GFS_YardSigns and will be available the first week of March.