On the watch for raptors in river gorge

14 species of raptors in the neighborhood 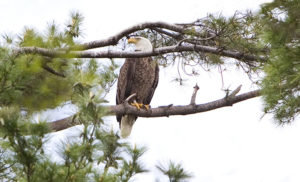 A bald eagle surveyed the Mississippi River from high atop a white pine. There are at least 90 active bald eagle sites in the Twin Cities.(Photo by Margie O’Loughlin)[/caption]

The Mississippi River Gorge runs right through the most densely populated, highly-urbanized part of Minnesota. The gorge is part of the Mississippi River Flyway, through which more than 300 species of birds pass every year on their spring and fall migrations. Of course, not everyone is just passing through.

Longfellow bird expert Dave Zumeta said, “We have identified birds of all shapes and sizes in the gorge. Some of the easiest to see without binoculars belong to the family of birds called raptors. We know of at least 14 species of raptors that migrate through, and/or winter in the gorge: the turkey vulture, the bald eagle, nine kinds of hawks, and three kinds of owls.”

What makes a bird a raptor? All raptors have hooked beaks, sharp talons on their feet, and very keen eyesight. The raptor’s beak sets it apart from other birds. All raptors have the same beak design, curved at the tip with sharp cutting edges to rip and tear apart their prey.

Bald eagles, which were on the U.S. Threatened and Endangered Species List until 2007, are now frequently seen soaring above the river gorge. Their numbers have been restored by the banning of the pesticide DDT and better habitat protection.

Zumeta is encouraged by the rise in population of bald eagles. He said, “When I moved to Minneapolis in 1981, I think there were about 200 breeding pairs left in the state. Now that number has climbed by a factor of almost 10. Minnesota has among the most breeding pairs of bald eagles of any other state besides Alaska. It’s a huge success story.”

Adult bald eagles are recognized by their white head and tail feathers, and their brown-feathered bodies. Their wing span averages 6-7.5 feet from tip to tip. Nests are constructed in large white or red pine trees, aspen or cottonwood, near lakes and rivers. There are an estimated 90 active eagle nests in the Twin Cities metropolitan area, according to the Minnesota DNR.

Eagle nests are built of sticks, commonly 6-8 feet across, and added to each year by the returning resident pair. Females lay up to three eggs beginning as early as January. Both parents take turns incubating the eggs, which hatch in about 35 days. Eaglets start flying at three months of age, in late May through early July. Four weeks or so after they learn to fly, young eagles leave the nest for good.

Another spot to see raptors is near Lock and Dam #1 at the Ford Dam site. Zumeta said, “There are great opportunities to see peregrine falcons here. The Observation Deck is closed due to COVID-19 but when it’s open, I think it’s one of the best place to see peregrines in the whole Twin Cities. For the second year, a pair is nesting on the underside of the Ford Bridge. Last year, they successfully reared four young there.”

Peregrine falcons are the fastest birds in the world. Zumeta said, “They are extremely territorial, and have been clocked dive bombing at 180 miles per hour. Several years ago I was walking across the Ford Bridge and I saw a Cooper’s hawk flying by. All of a sudden, a peregrine falcon dropped out of the sky like a shot. It must have been defending its nest. The Cooper’s hawk barely got away with its life.”

The Ford Dam site is also a likely spot to see great egrets. These spectacular white birds ply the waters of the gorge quietly looking for fish, frogs, snakes, and crayfish to eat. Great blue herons frequent this area as well. In flight, the great blue heron curls its neck into a tight “S” shape, and its legs trail distinctly behind its tail. Both the great egret and the great blue heron are big, showy birds – not raptors – but fun for new birders to identify.

Of three species of owls that are seen in the gorge, the barred owl is the only permanent resident. It is a large, stocky owl with a rounded head, no ear tufts, and a handsome horizontal striped chest plumage (the bars that give the owl its name). The barred owl nests in cavities in pine, spruce, fir, and cedar trees. It has a signature call that sounds like, “Who cooks for you, who cooks for you-all?”

Whether listening or watching for raptors, be patient, and be willing to be surprised. Zumeta said, “With birds, there’s always more to be seen. Eagles, ospreys, most of the hawks, vultures, and peregrine falcons are all more common in the gorge than they used to be. Here we are in the middle of a major urban area, with the chance to see least 14 species of raptors in our own neighborhood.”