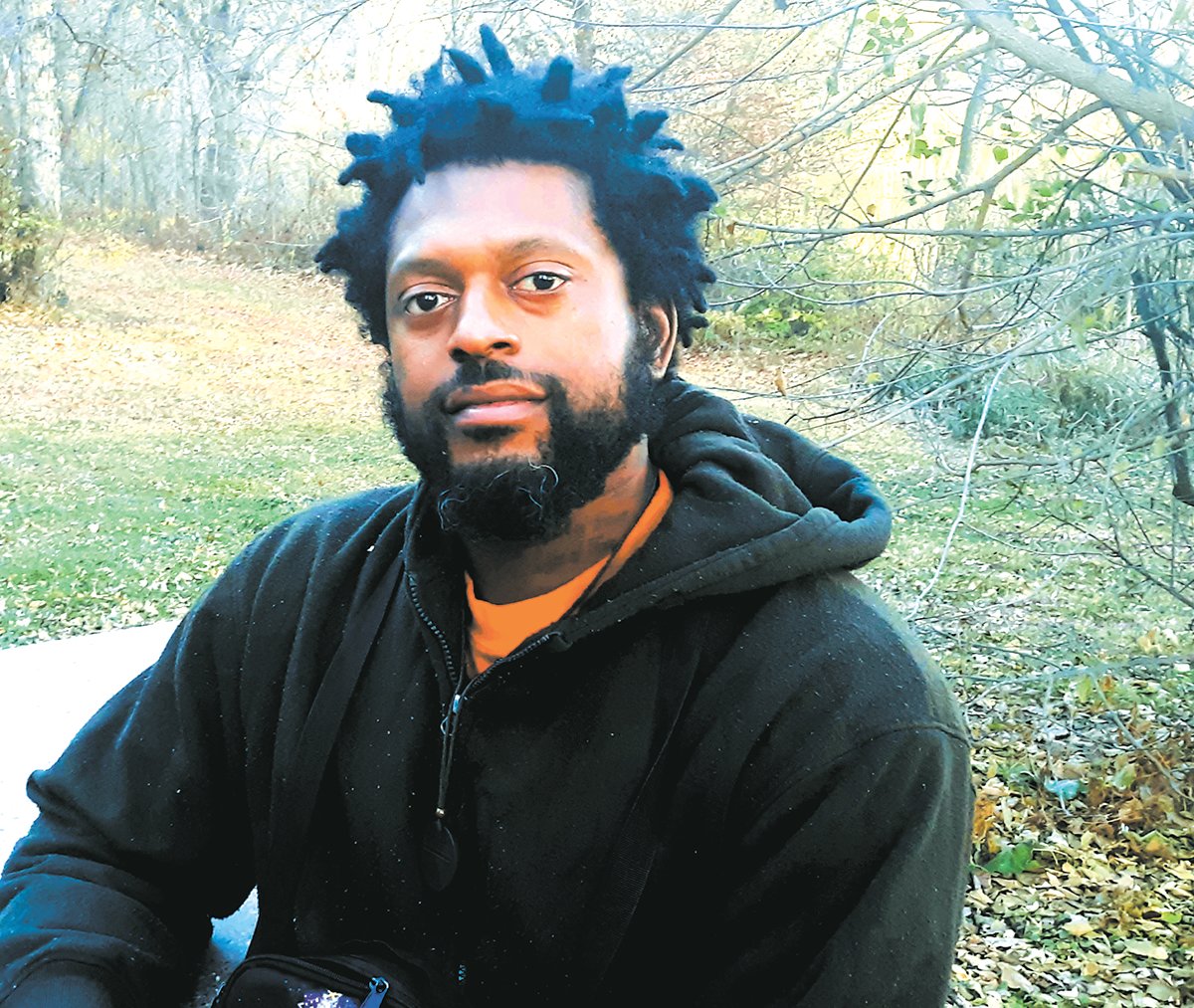 Floyd Williams' father was the first Black police officer in the Metropolitan Airports Commissioner, where he worked from 1968-98. (Photo by Jan Willms) 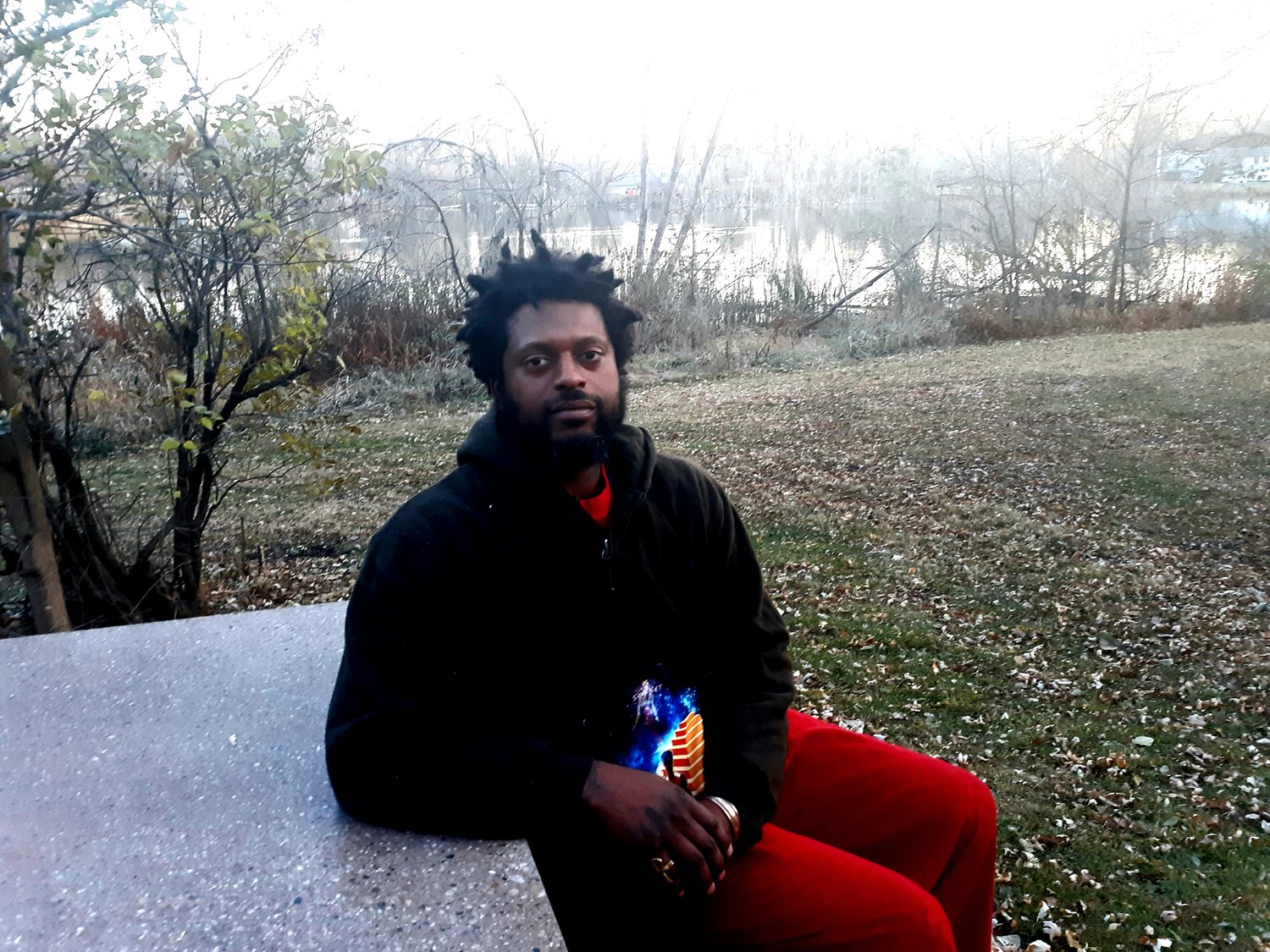 Floyd Williams' father was the first Black police officer in the Metropolitan Airports Commissioner, where he worked from 1968-98. (Photo by Jan Willms)
Previous Next
Posted Saturday, January 2, 2021 6:00 pm
By JAN WILLMS

Floyd Williams describes himself as a student of life, a revolutionary on many different levels: mentally, spiritually and socially. “I am definitely a person who is about my roots, and bringing to fruition the vision of the ancestors, which I describe as liberation,” he said.
With that in mind, and with the current atmosphere of concern about social justice, Williams has released a second edition of “The Origin of Racism,” a book he first wrote in 2012. “The book has a new introduction and includes what is happening up here in Minnesota in 2020,” he said. Williams has written four books. He is also the owner of Thought Healing, where he teaches kinetic yoga and reiki, and does aura photography.
Williams claims he is very much a reflection of his father, who was the first Black policeman in the Metropolitan Airports Commission. He served there from 1968 to 1998. “My father loved history, especially Black history,” said Williams. “One of the things I remember him telling me was about the power of taking notes.” That note-taking has led Williams to write books.
He said his father experienced racism from the beginning of his job and filed discrimination suits a couple of times during his career. “A sergeant on the force told him you have to send out a boogie to deal with a boogie,” Williams recalled. “They would send him out to quell or calm down other Black people. He had to fight discrimination the whole time he was there.”

First-hand observer of prison
When his father died in 1999 from a heart attack, Williams was just 16. He left the Merriam Park neighborhood in St. Paul where he had grown up and headed for Little Rock, Ark., to live with an aunt.
The loss of his father left Williams traumatized, and he eventually got into trouble, ending up serving a sentence of nine years in a Mississippi prison. That experience gave him an opportunity to be a first-hand observer of the racial disparities in the penal system.
Williams compares prisons to plantations, a continuation of slavery. “The prison system was created simultaneously with the Emancipation Proclamation,” he said. “It was used as a convict lease system. The prisons were filled with Blacks, the same as today, in cells for minor infractions. You could be arrested back then for congregating in groups of two or three, or for eyeballing a White or European. The convict lease system did not end until 1918.”
When he was serving his sentence, Williams said the prison in Mississippi was called “the farm.” Prisoners would work in different parts of the town. “They’d pick you up in the morning, pull you out to a farm on a tractor bed that held about 40 people. You would be out there from sunrise to sunset.” Williams said the prisoners would pick everything, from beans to corn to okra. “And it was scorching hot,” he recalled. He said there were 40 deaths of prisoners in two to three months.
“Blacks are 14 percent of the general population, but almost 90 percent of the prison population,” he added.
Williams also laments the education gap between White and Black students. “We still have many Black and Brown kids who can’t read at a third grade level,” he said.
“One thing that stands out and bothers me about Minnesota, and that should prick everyone’s conscience, are the two institutions that stand side by side,” Williams stated. “On Energy Parkway, you have the Minnesota Department of Education and the Minnesota Department of Corrections right next to it, and they’re not on the same team.”

No all-Black jury for a Black prisoner
According to Williams, systemic racism was an earmark of the Dred Scott Decision in March 1857. The enslaved Dred Scott sued for his freedom, since he had traveled with his owner to Illinois and Wisconsin Territory, where slavery was illegal. The case went all the way to the Supreme Court, which ruled against Scott, claiming that an African American was not a citizen.
“They said no Black man has any rights that a White man should consider,” Williams said. “There has been an imbalance and an indifference in the justice system ever since. There has never been an all-Black jury for a Black woman or man, but there have certainly been all-White juries for a White prisoner.
“Even today in 2020, Black people have to search for themselves, ask who they are. They have to painstakingly connect the dots about who they are,” Williams continued.

George Floyd: Modern-day lynching
Reflecting on the recent killing of George Floyd, he said the tragedy unfortunately is nothing new for America. “It was definitely a modern-day lynching,” Williams said. “There was no rationale for kneeling 8 minutes and 46 seconds on a person’s neck, and no one helped.”
He said the phrase “I can’t breathe,” should not exist. “It’s the same mantra, the same chant, the same cry for different generations,” Williams said.
Williams expressed hope that racism can be fought, and that each race has a role in dealing with it. “For Blacks, our means of dealing with racism is self-love, loving on each other, basking in the glory of who we are, operating collectively and aspiring towards liberation.”
Williams said Blacks have to change the relationship, that a majority of them worked for the White man at the time of the Emancipation Proclamation and still do today. “We have to change the dynamics of the relationship or it’s not going to stop.”
He said the killings and injustice Blacks face globally will not change until they move like everybody else, putting race first. “Spend your money first with people who look like you,” Williams said.
“But racism is not something Black people can fix,” Williams continued, noting that Whites have a role to play. “Racism is not something Black people created or are perpetuating.
“Even before slavery ended, the Black man strived to co-exist with his master. There were slave revolts and insurrections, then reconstruction and the Civil Rights movement. We have not kept up the racism.”
Williams said slavery was put into practice by Whites and Europeans who have been dead for centuries. “Their progeny have come into power, and we have not been able to strike a moral chord,” he said. “We have been struggling to be a part of the American fabric. We’ve been fighting wars, coming home to be lynched.”
The only way racism can end, according to Williams, is when the progeny admit that what happened under their ancestors was not right, and say “No more.”