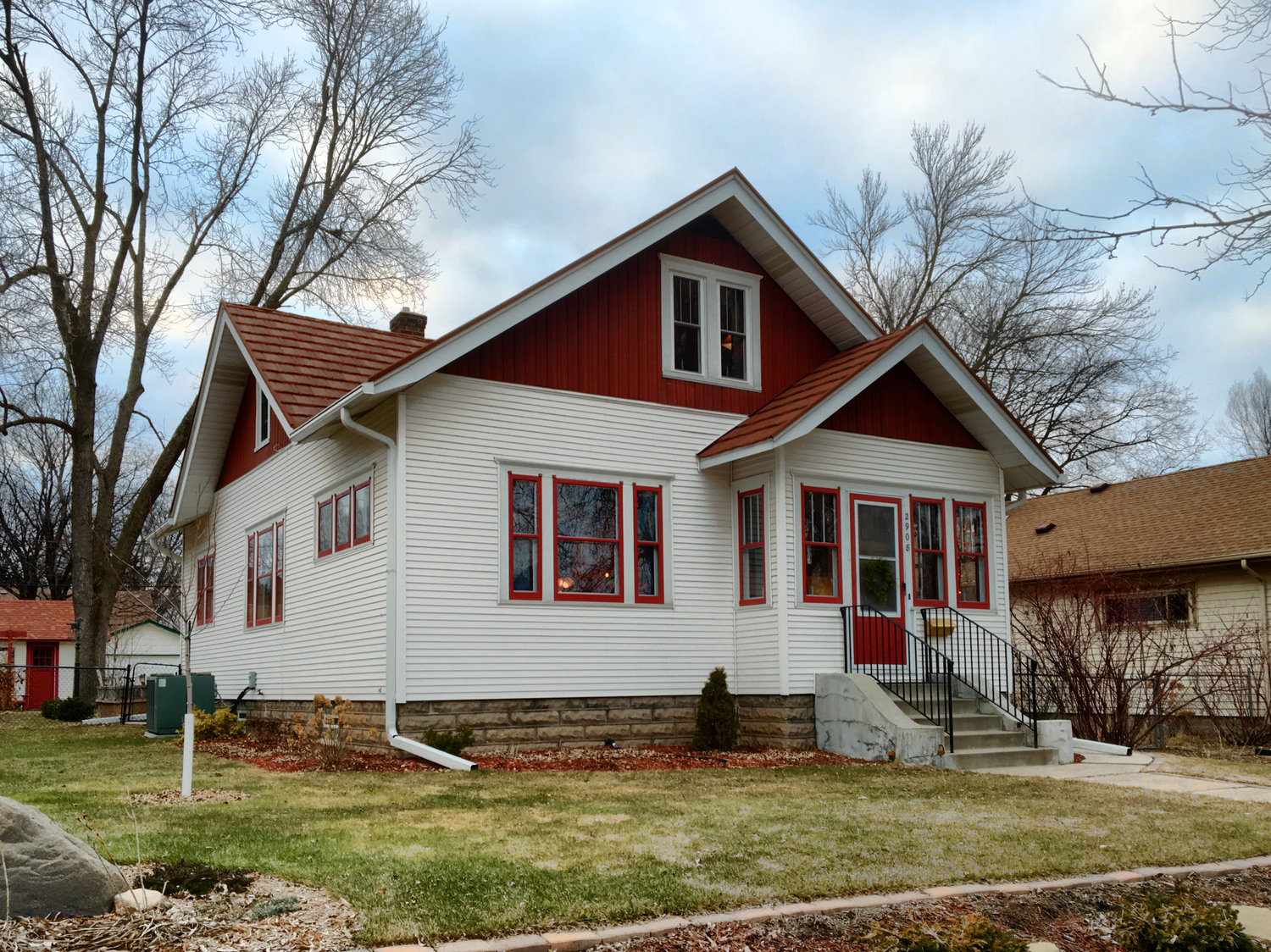 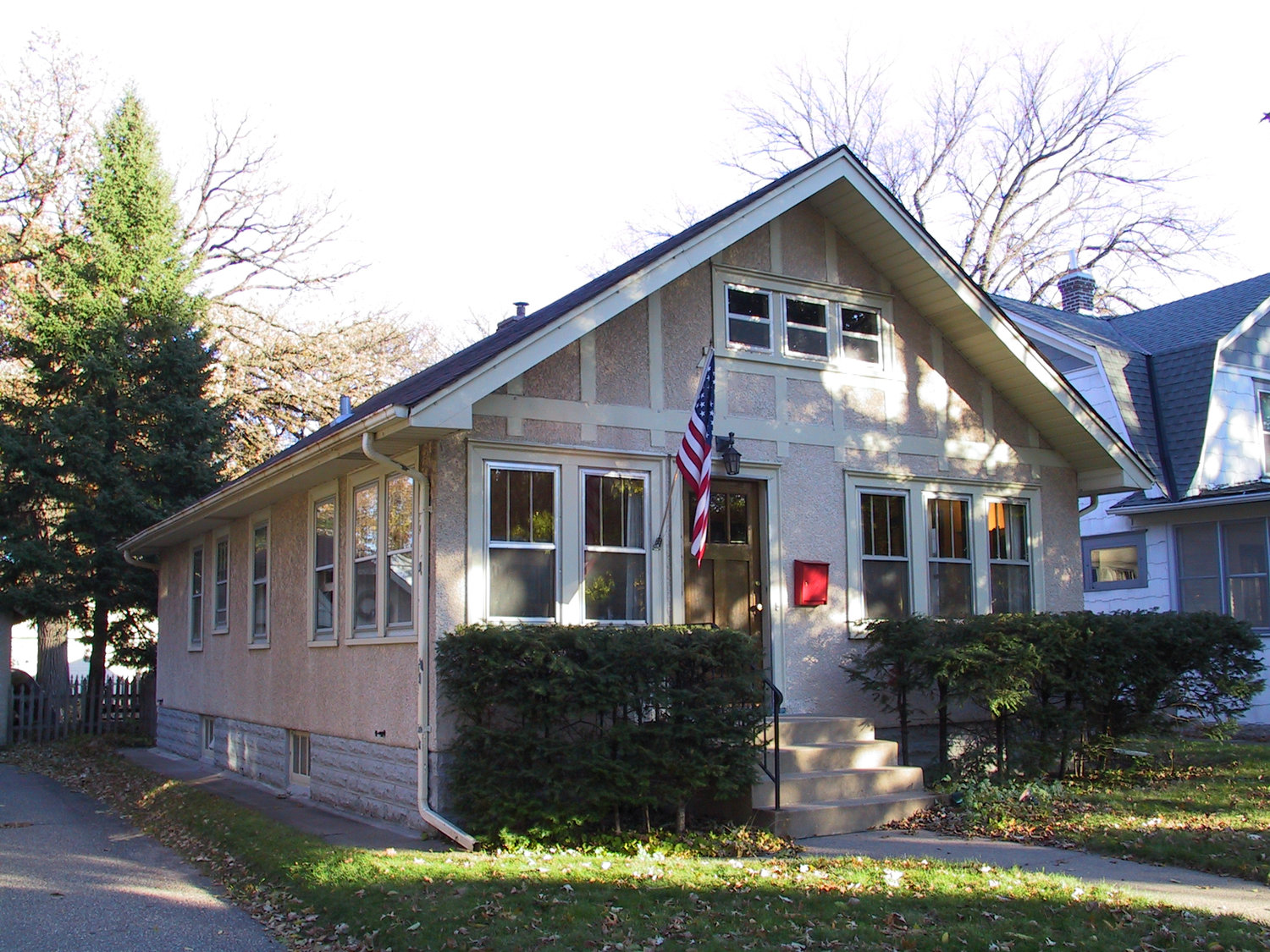 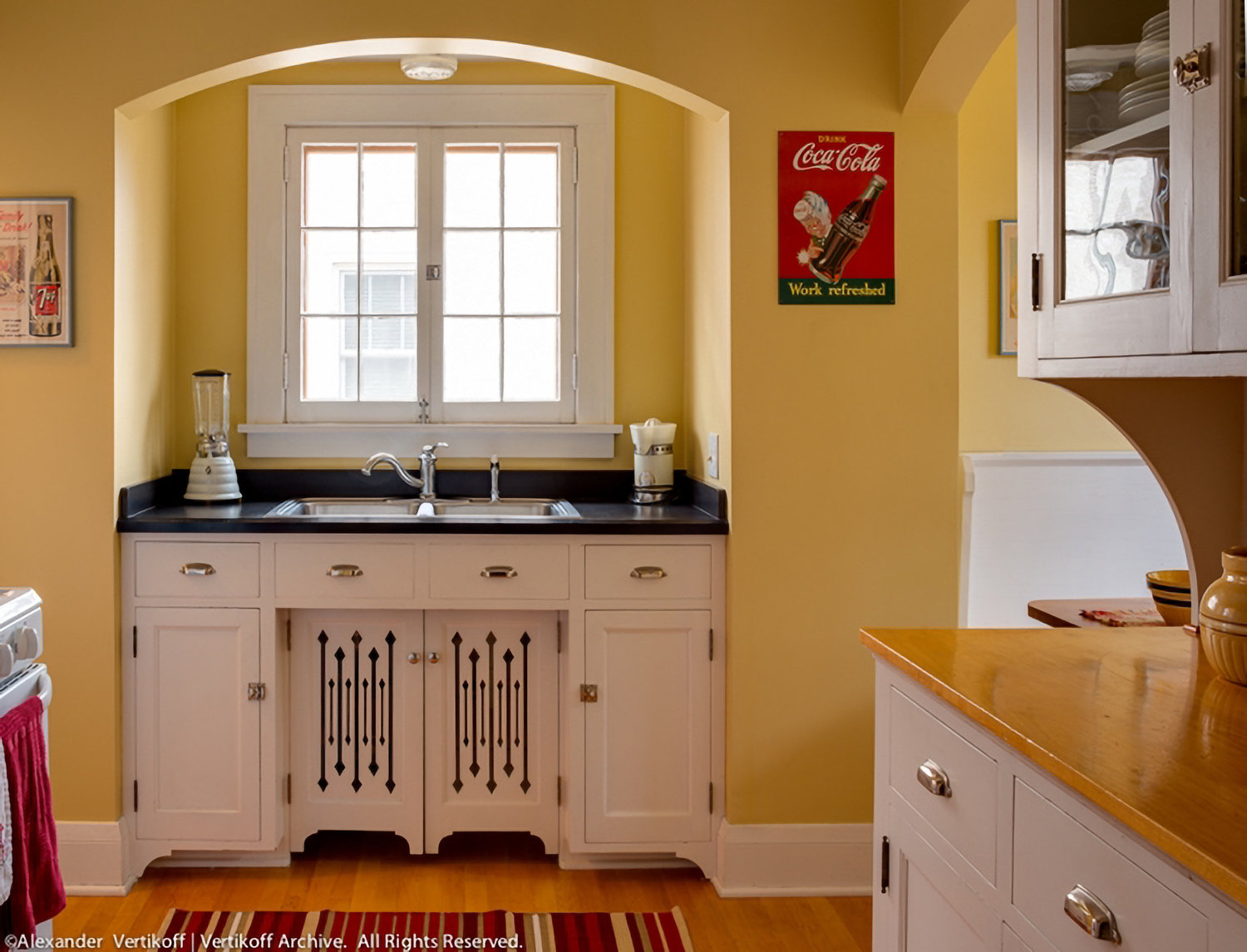 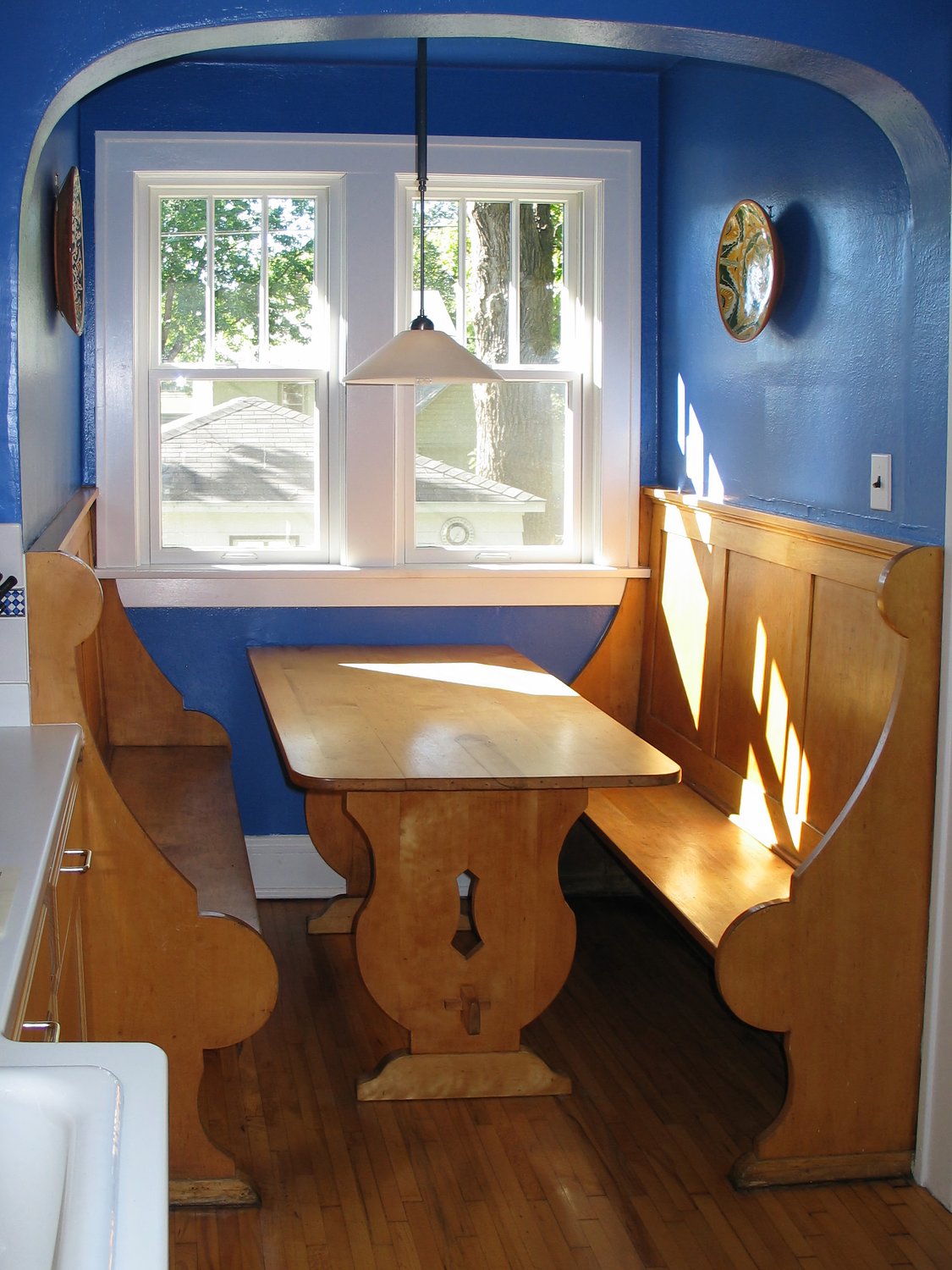 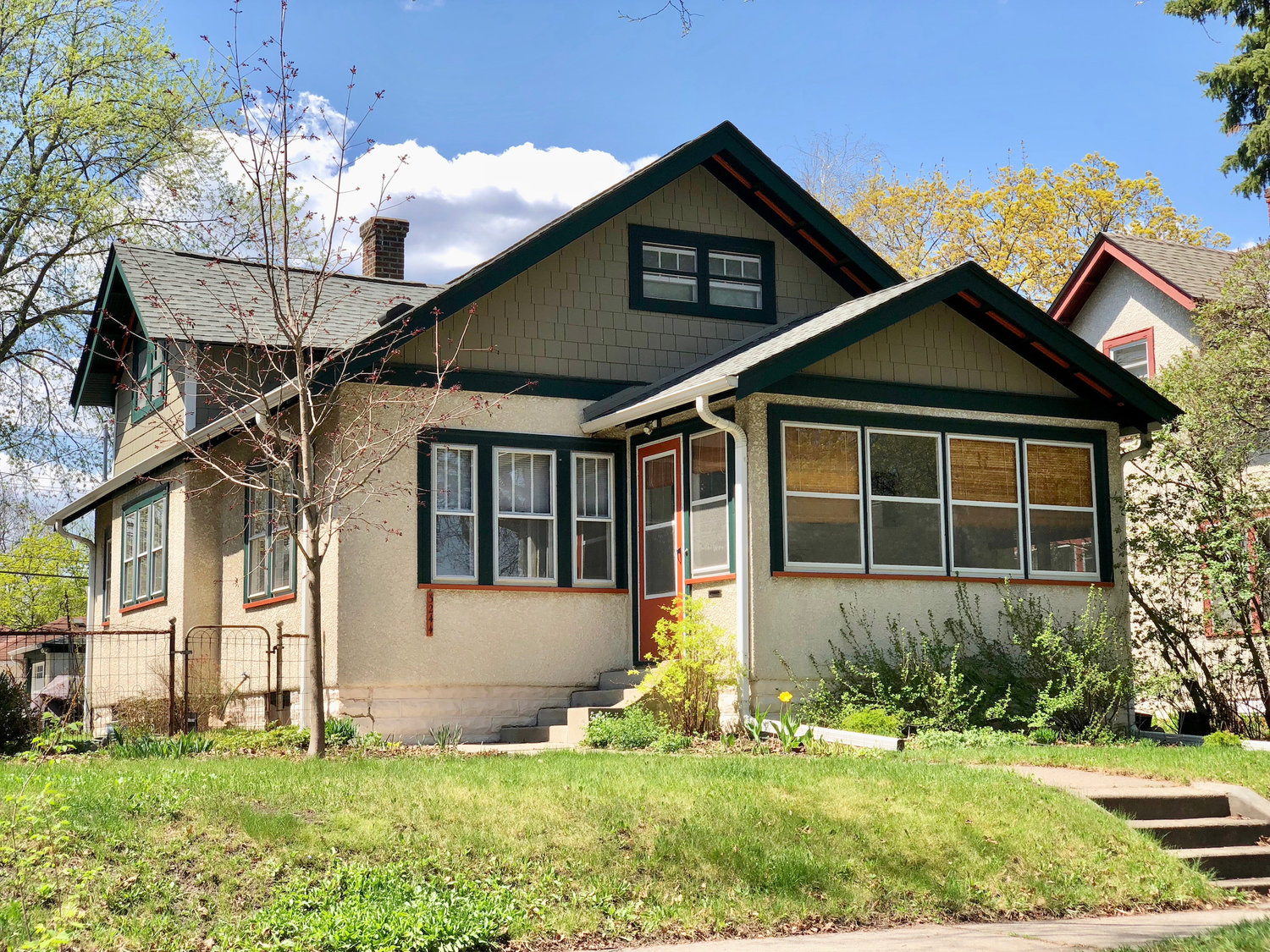 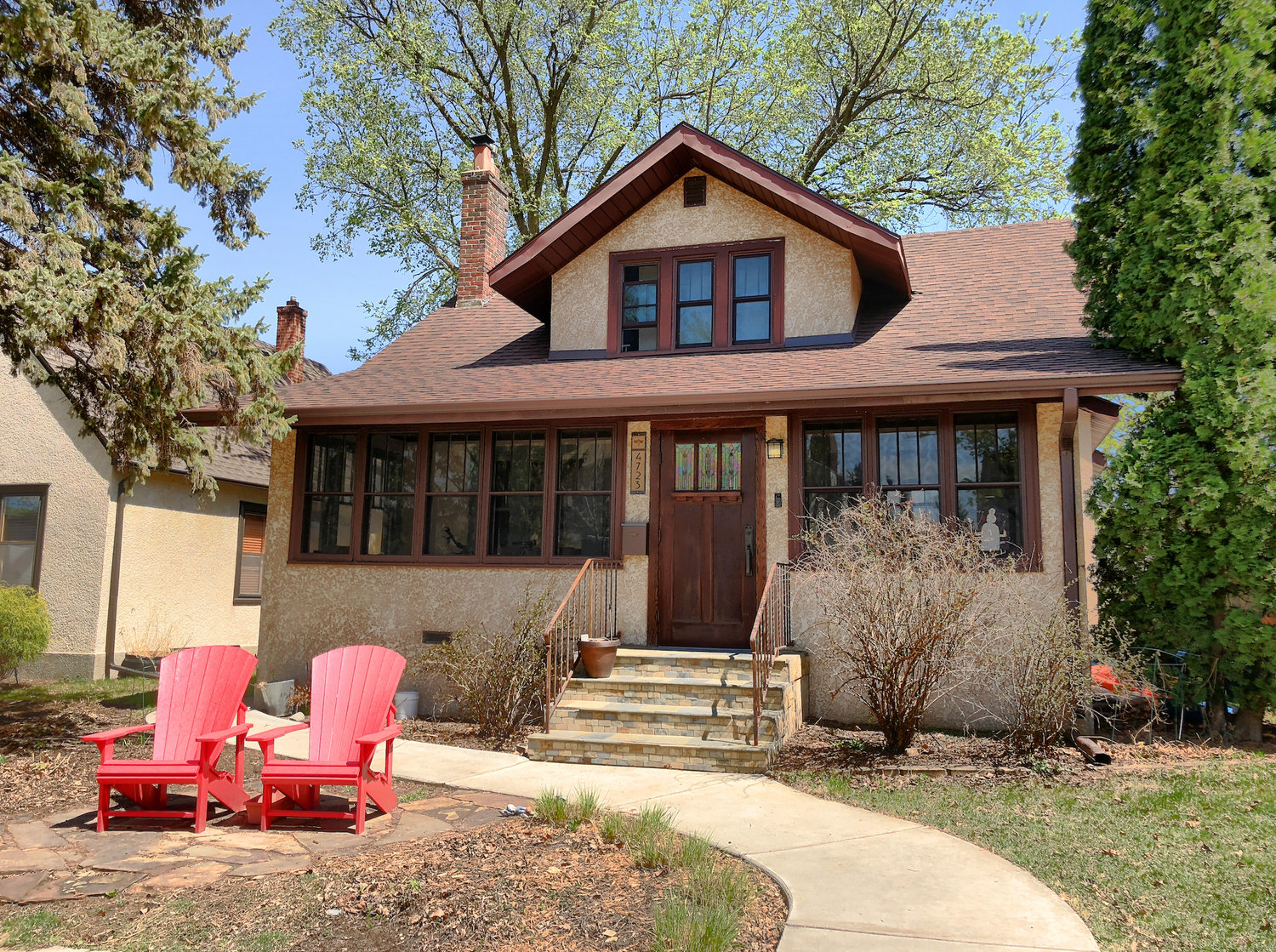 Several years ago, Kristi Johnson, the Bungalow Club’s founder, established a collection of bungalow, mission, and Arts & Crafts books and journals at the Merriam Park branch of the Saint Paul Public Library (1831 Marshall Avenue). Club members donated many of the first books. Over the years, the Bungalow Club has provided the library with funds for additional purchases. The collection numbers over 160 books.

The often under appreciated bungalow has a dedicated fan base in the Twin Cities.
The Twin Cities Bungalow Club celebrates the small one or one-and-a-half story houses built between 1910 and 1930 as affordable, easy-to-maintain, and full of character.
According to their website, traditional bungalows have a low-pitched roof and a horizontal orientation (rather than vertical, as in Queen Anne Victorian houses). They usually feature a prominent front porch. The roof frequently has a wide overhang with exposed rafter tails supporting it. Sometimes angled wood brackets supported this overhang.
Longtime Bungalow Club President Tim Counts, who lives in a bungalow in Corcoran, shared his thoughts on the organization.

What is the history of the Bungalow Club?
Counts: The Twin Cities Bungalow Club was started in 1995 by Kristi Johnson, who lived with her husband in a Longfellow neighborhood bungalow. (They now live in a bungalow in Duluth). The Longfellow neighborhood association hired a contractor to survey the neighborhood’s housing stock. The contractor reported that a majority of houses were bungalows, and labeled them as a liability – small and outmoded, “starter houses” or “grandma’s houses.”
Kristi was livid. Contrary to the prevailing view at the time, Kristi saw bungalows as high-quality housing stock built with sturdy, old-growth wood. Many were stucco-sided (the original maintenance-free siding) and boasted real plaster-and-lath walls. They were also loaded with character – rich oak woodwork, windows with divided lights, built-in bookcases and dining room buffets, and sometimes a brick fireplace or a breakfast nook. You simply couldn’t afford to build houses with such high quality materials and workmanship at today’s prices. Bungalows also had manageable front and back yards, with plenty of room for flower and vegetable gardens. In an era where suburban house and lot sizes were growing exponentially, bungalows were compact, charming and affordable.
Kristi started the Twin Cities Bungalow Club singlehandedly, and ran it largely by herself for about five years. By that time, the Longfellow neighborhood was putting up metal street signs that read: Longfellow – A Traditional Bungalow Community. The birth of the Twin Cities Bungalow Club coincided with a nationwide revival of the Arts & Crafts style and movement (which originally ran during the first decades of the 20th century), and a renewed appreciation of bungalows. For example, American Bungalow magazine (www.americanbungalow.com) began publication in the early 1990s.
Mission statement: The Twin Cities Bungalow Club is dedicated to fostering an appreciation for these charming and livable early 20th century homes. We are committed to preserving bungalows and other Arts & Crafts style homes of the era along with the neighborhoods they occupy; to learning their history; and to exploring the furnishings and decorative objects that filled them.

How can people become members?
Counts: Memberships start at $15 per year for an individual membership, or $25 for a household (two people). Discounts are available if signing up for two years. Members receive an information-packed newsletter four times a year, plus free access to quarterly events on Arts & Crafts and bungalow topics, including our annual house tour. Website: www.bungalowclub.org.

What drew you to the club?
Counts: In 1994, I was looking to purchase a house. I didn’t have much money, so my primary criteria was “cheap.” I looked at quite a few houses in my price range, but they were all disappointing. Then my Realtor and I pulled up in front of the bungalow I would end up purchasing. We both said, “Oooh.” Inside, it just felt right. Even though the walls were painted a harsh white that clashed with the dark woodwork, and the floors were covered with orange and green shag carpeting, the house spoke to me.
After my purchase bid was accepted, I took the home’s real estate flyer to work. A coworker looked at the photo on the flyer and said, “That’s a bungalow.” I said, “What’s a bungalow?” She said, “I’m not sure, but I think there’s a magazine about them.” I asked her to pick up a copy for me if she ran across it. A few days later she brought in a copy of American Bungalow magazine (www.americanbungalow.com), and I fell down the bungalow rabbit hole.

Tell us about your bungalow.
Counts: My bungalow is modest – just over 1,000 square feet of living space on one level (two bedrooms and one bathroom), plus a full unfinished basement. But I love it. It doesn’t have a fireplace, but it does have a beautiful, useful breakfast nook in the kitchen and a handsome built-in buffet in the dining room.

What do you love most about bungalows?
Counts: Bungalows have loads of charm and coziness. They’re small enough to be manageable, yet are fully functional. They can be small, but with a few minor tweaks they still work well for modern living.

What tips do you have for others?
Counts: Don’t work against your bungalow’s aesthetic by painting its interior white, especially the oak woodwork. Today’s fashion is bright, white and airy, but painting your bungalow’s interior white will not make it cheery, it will just make it look tired. Work with the bungalow’s character, using a warm color for the walls, which will bring out the red and gold tones in the woodwork.

Please give us details on the upcoming Bungalow Home Tour.
Counts: The 2022 Twin Cities Bungalow Club tour will take place on Saturday, May 7, 2022. It will last from 10 a.m. until 5 p.m. We’re still putting the details in place, so watch www.bungalowclub.org for updates.