Mile in My Shoes builds relationships, breaks down barriers 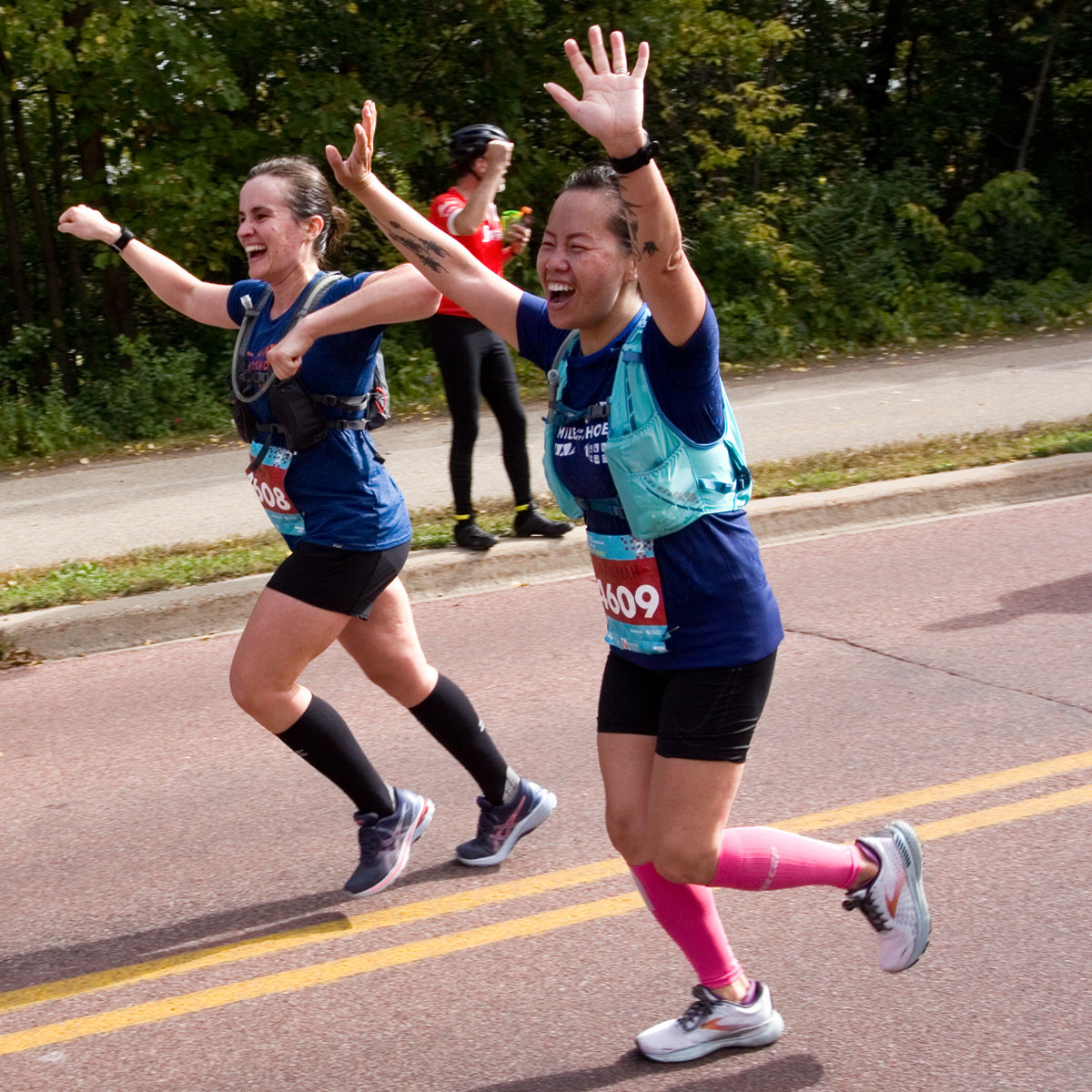 A pair of MiMS runners compete in the full 26.2-mile Twin Cities marathon on Oct. 3. (Photo by Margie O’Loughlin) 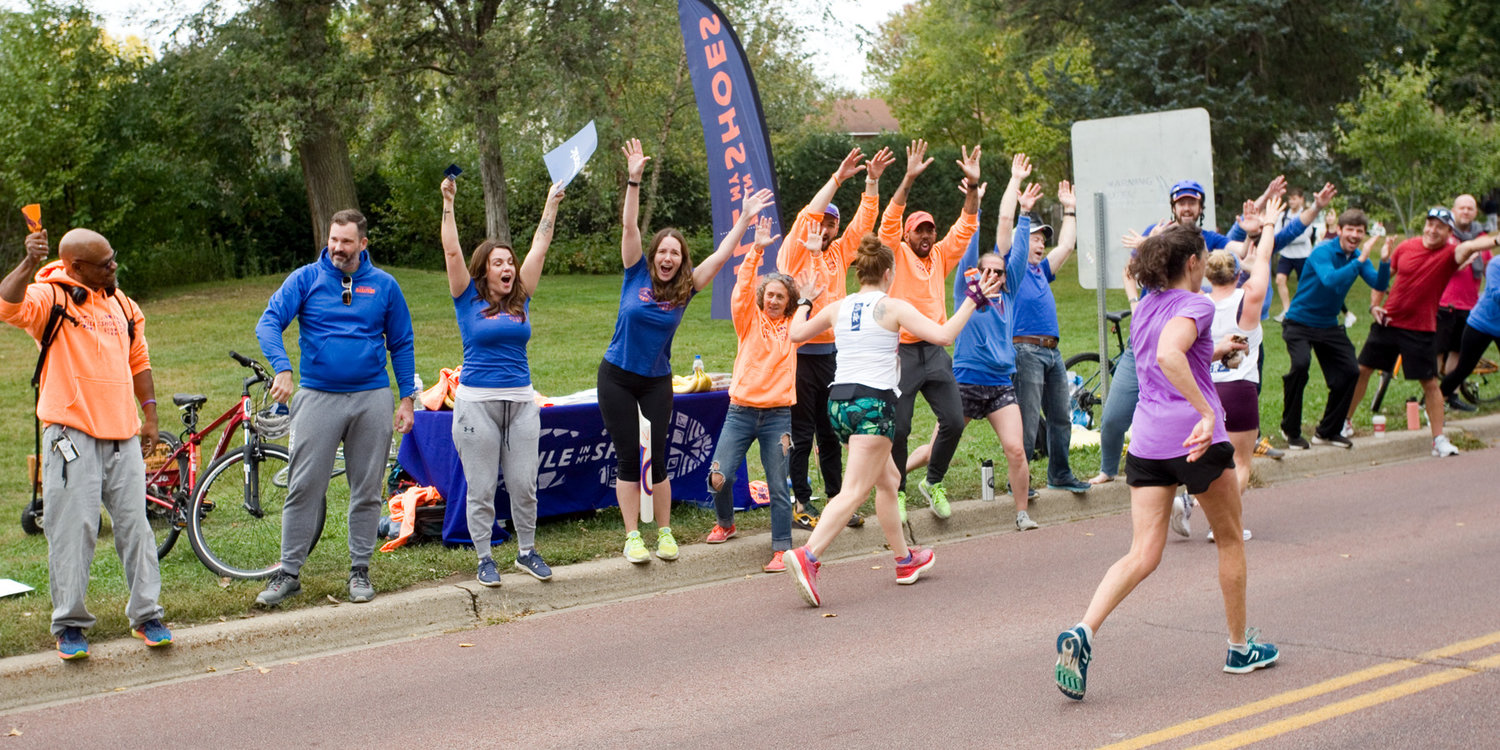 MiMS members cheered on the Twin Cities Marathon at mile 17 along the course on Sunday, Oct. 3. Co-founder and director Mishka Vertin (fourth from left), said, “We never intended for this to become big. We just wanted to start one little team. This year seven of our runners competed in the marathon.” (Photo by Margie O’Loughlin) 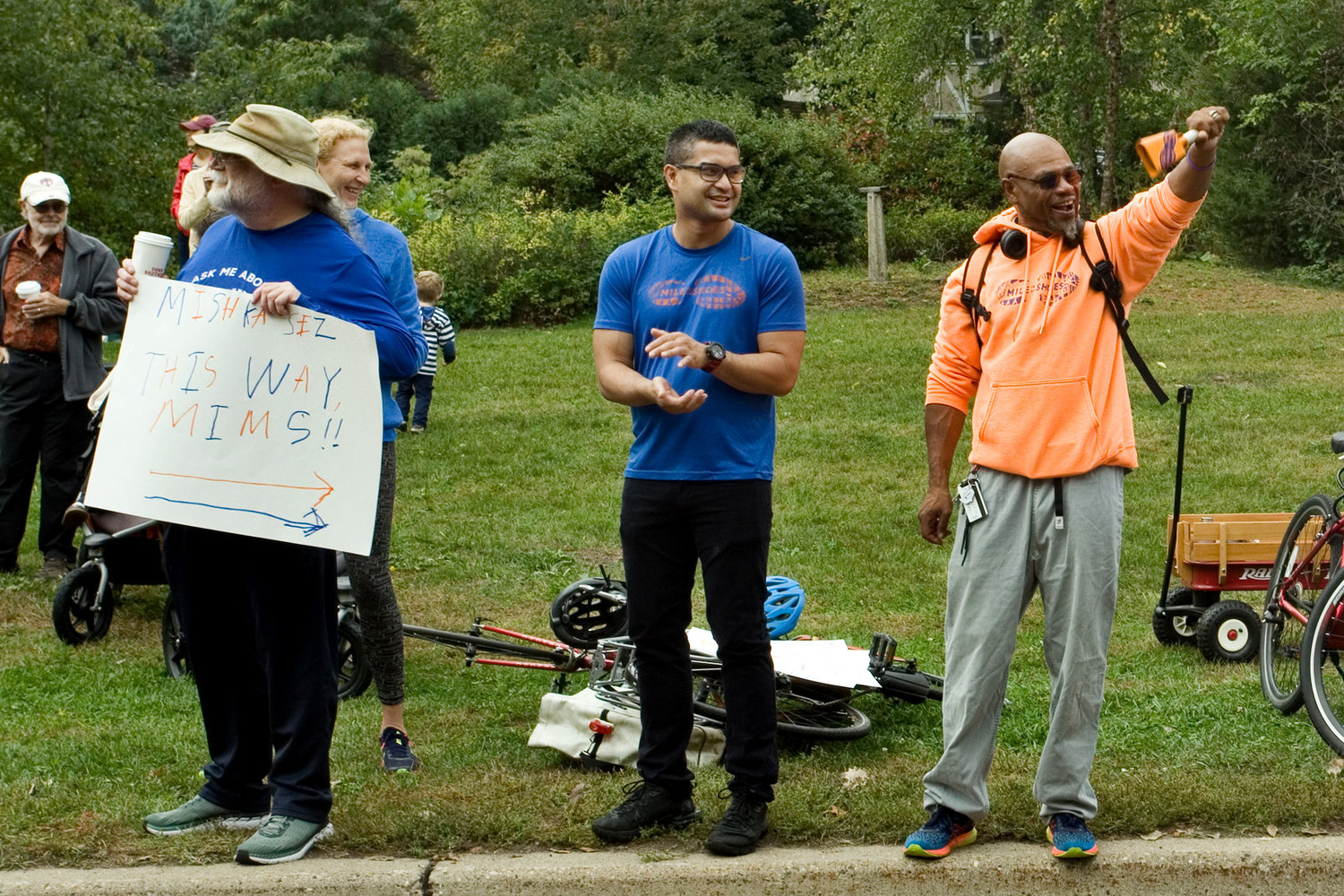 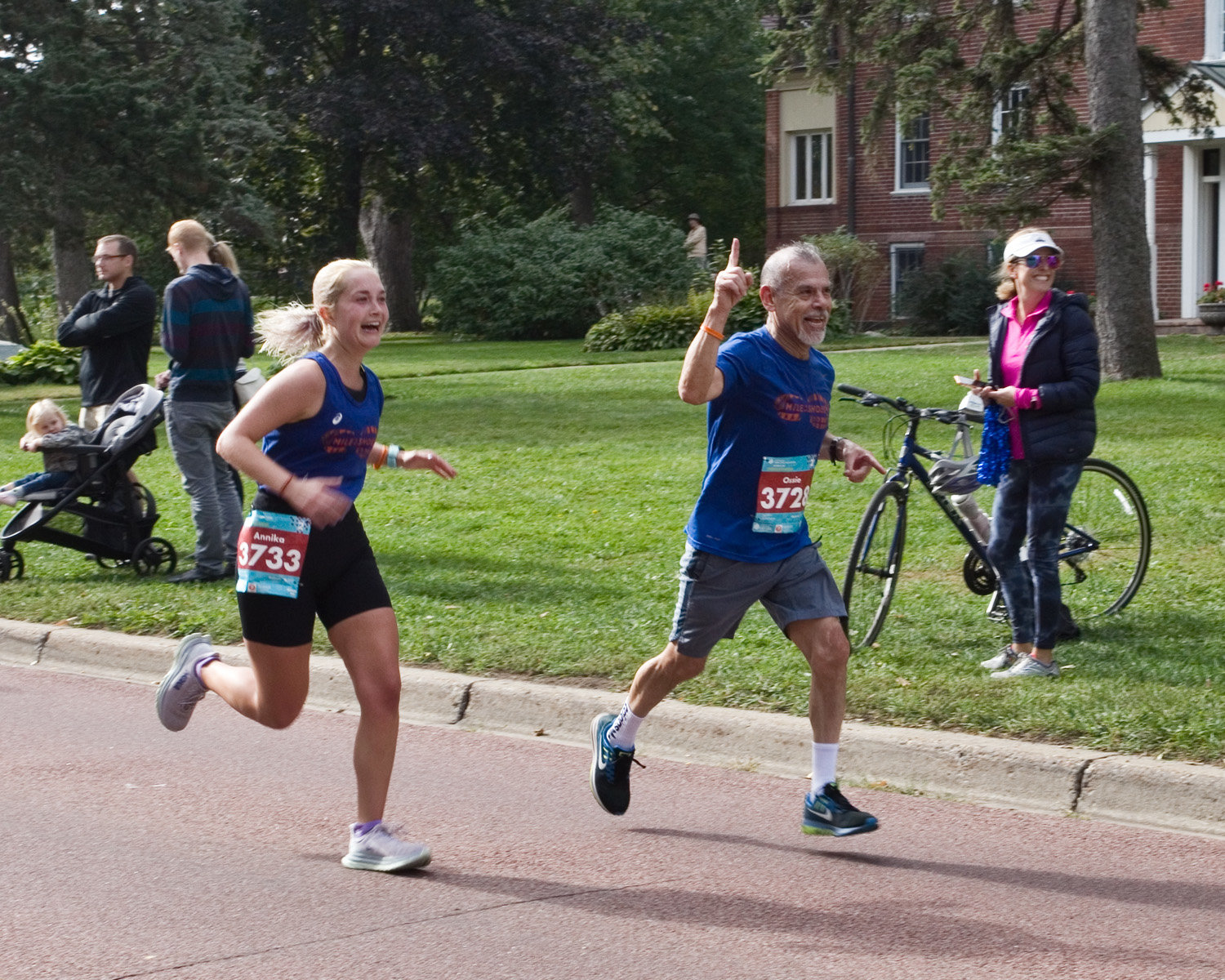 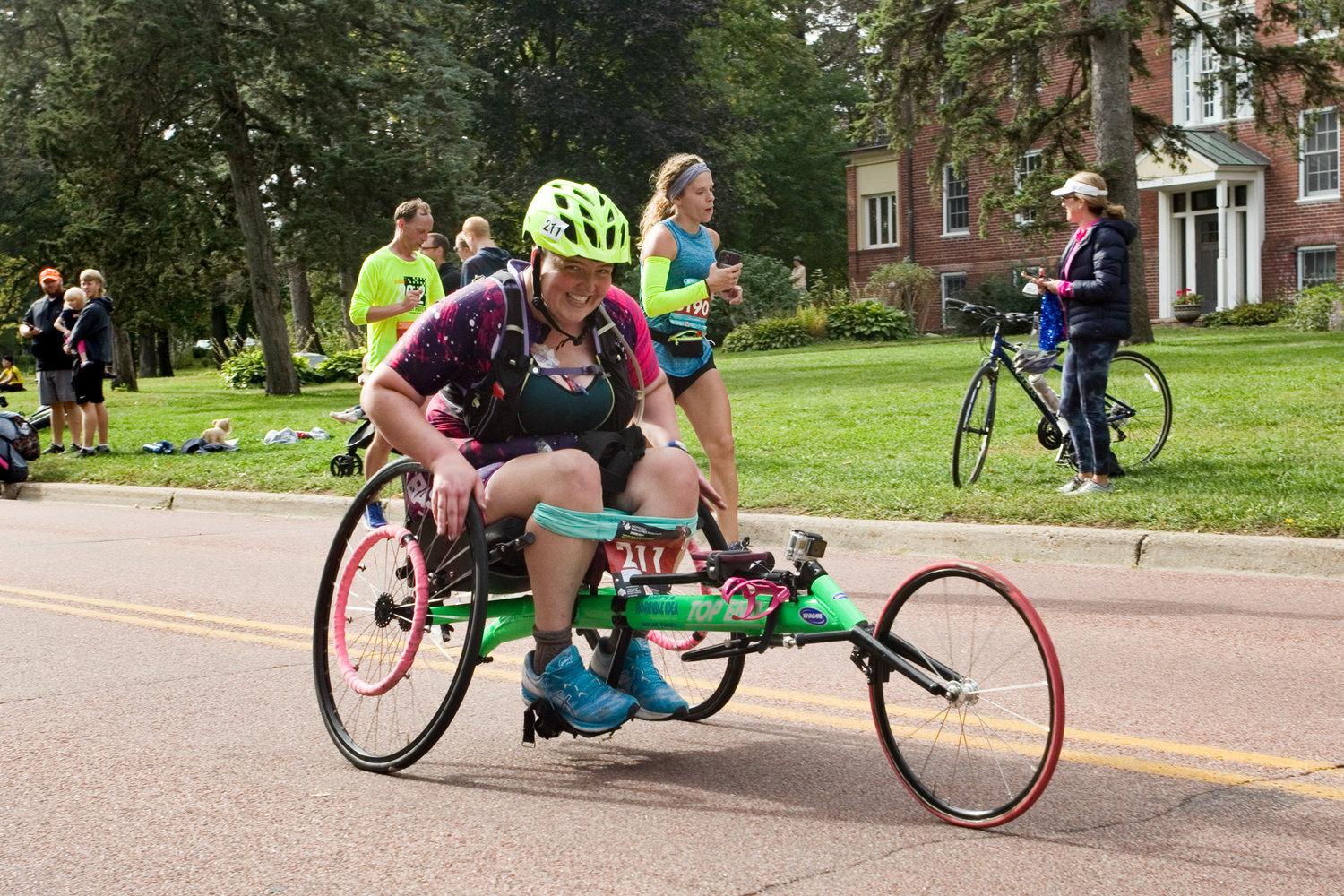 While the weekly runs may seem simple, the impact they have is multi-layered. Everything we do at MiMS supports relationship building and changing our perceptions of each other in positive ways.”
~ Mishka Vertin
SIDE BY SIDE

Mile in My Shoes (MiMS) brings Twin Cities residents together through the power of running. Based in homeless shelters and re-entry centers for people exiting incarceration, MiMS is a catalyst for community-building. By running together, resident members and run mentors find common ground – literally. They run side by side.

When Mishka Vertin moved from New York City to Minneapolis in 2014, she hit the ground running. Trained as a social worker, she took a job at Mill City Running while looking for a job in her field. She and her partner, Michael Jurasits, settled into life in the North Loop of downtown Minneapolis.
Vertin said, “We loved exploring the city and developing a new running community. The only thing was, we were surrounded by people who looked and sounded just like us. We’ve always thought there’s a danger in this homogeneous kind of living.
“Living in downtown Minneapolis, we ran past homeless shelters regularly. We started to think there could be a real benefit in getting people out running; people who might not think of running in a positive way. We thought maybe we could grow our own community to include more diverse people through running.”

From thought to reality
Mile in My Shoes launched its first running team in May 2014. The team included six shelter guests living at Catholic Charities Higher Ground of Minneapolis (resident members), two Higher Ground staffers, and eight volunteer runners (run mentors). In November 2014, Mile in My Shoes (MiMS) became a registered 501(c)(3) non-profit organization, and created its board of directors.

A look at the numbers
Since MiMS’ founding, people experiencing homelessness, exiting incarceration, or in addiction recovery have laced up their running shoes and run their first mile. More than 400 new runners have completed a 5K race, and dozens have completed half-marathons and full marathons. One hundred percent of resident members have shared that they see themselves more positively than before they started running, and 85% feel more connected to their community. MiMS has had over 300 run mentors, 80% of whom have run with a resident member in at least one race.
Vertin said, “We run together to change perceptions in all directions, and to build community among people from different backgrounds. The relationship ratio is pretty much 1:1. The run mentor goes whatever at whatever pace and distance the resident member is able to go. Sometimes the resident member is faster than the resident mentor; I love when that happens. It’s important to say that the run mentor is only mentoring in terms of running. Both partners have so much to give and to gain.”
“We have alumni teams of people who have moved out of shelters and re-entry facilities and they’re still running with us. We take new resident members any time they want to start. This season, we’ve had almost 200 new resident members start running with us.”
“The resident members and the run mentors are excited to try something new, to push themselves, and to expand their social circles.”

How it works
Within a partnering facility, residents can sign up for a MiMS orientation. If they’re willing to commit to running 2-3 times per week with the team, resident members are outfitted with new running shoes, shorts, jerseys, and socks. A lot of donated supplies come from Mill City Running and their running partners like Asics and New Balance, two companies who want to give back to the community. Race directors frequently donate their left-over race shirts to MiMS, and let resident members run their races at reduced rates or for free.
Once outfitted, resident members are partnered with run mentors and they commit to a shared running goal.

Relationships are the backbone
Vertin explained, ”While the weekly runs may seem simple, the impact they have is multi-layered. Everything we do at MiMS – the runs, the races, the social events, or panel discussions on subjects like the challenges of re-entry – all support relationship building and changing our perceptions of each another in positive ways.”
Over the years, running MiMS became Vertin’s full-time job. She said, “We never intended for it to get so big, but it did because the need was there. In addition to running, our teams like to socialize together. Teams have met at the Minneapolis Bouldering Project and worked out on the bouldering walls; they’ve organized BBQs, gone bowling, played pickleball, even tried out aerial yoga. It’s incredible how changing the activity can change the dynamic.
“We have a member of our South Minneapolis team whose story illustrates this. About six months into running with MiMS, he mentioned that he liked to bowl. The team organized a bowling night, and he bowled a 200-plus point game. It turned out that he had been a champion bowler in his home country of Vietnam, and none of us knew this about him. We were always showing up to run with him, a sport he knew nothing about when he started.
“We want to the resident members to have a chance to shine, and to develop their leadership potential, too.”

Connect with MiMS
The official club season comes to an end at Thanksgiving, but will start up again next spring. There will continue to be monthly pop-up runs that anyone is welcome to join. Visit the website for information at www.mileinmyshoes.mn or check out their Facebook page for more information.
Vertin said, “We welcome new connections for our social events and weekly runs. Do you own a gym? Are you a personal trainer? Anything related to improving health and wellness would be a great fit. Much of our funding comes from people called ‘Fund Racers,’ who spread the story of MiMS through their training and racing. This is one way to get involved if you can’t commit to running regularly with a team.
“Our run mentors tell us all the time that MiMS has added a whole new dimension to their running, and sometimes it’s the thing that propels them into advocacy or action working on behalf of people experiencing homelessness or exiting incarceration. Intentional but equal, that’s what we’re after.”