Pregnant and parenting during COVID-19: There are no manuals for this 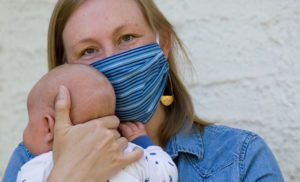 Ingrid Rasmussen and her six-week-old son Lars, carried through and delivered in the time of COVID. (Photo by Margie O’Loughlin)[/caption]

Ingrid Rasmussen had everything well-organized for her second pregnancy, and the first two trimesters went according to plan. When the Stay-at-Home Order was issued, Rasmussen was six months along. With her husband and their three-year-old daughter, she settled in to being at home.

As the senior pastor of Holy Trinity Lutheran Church, one of Rasmussen’s new responsibilities was to help the church transition into lockdown mode. Sunday services and all other face-to-face gatherings were quickly put on-line. Some two months later George Floyd was murdered. She said, “The church went from being completely closed to completely open in about 10 minutes.”

Located one block from the 3rd Precinct, the most immediate need of the church was to provide space for a medic station. Holy Trinity staff welcomed teams of medics and helped them set up in the church community room. Suddenly Rasmussen was back at work, and in a COVID-19 exposure situation that could only be described as very high risk.

The medics brought resources to help with emergency needs around the clock. People coming in were treated for tear gas exposure to eyes and skin; injuries resulting from being shot with rubber bullets, scrapes and bruises; and emotional trauma sustained from being around the Third Precinct both before and after it burned.

None of this was part of Rasmussen’s pregnancy plan.

She explained, “During the unrest, it was all-hands-on deck for pastors from our church, and clergy from other faith communities, too. We assisted the medics and offered pastoral care to anyone who needed it. Frequently people came into the church just for a moment of silence.

“Not insignificantly, after fires overtook so many of the nearby buildings, we had one of the few working toilets in the neighborhood.”

A movement worth leaving quarantine for

Rasmussen and her husband agreed that supporting the Black Lives Matter movement was worth leaving quarantine for, even though they both knew that exposure to tear gas, and many other things Rasmussen would encounter, weren't good for a pregnant woman. She remembered the restrictions of her first pregnancy: the doctor had cautioned her not to eat sushi and to limit her caffeine intake.

This was clearly a very different pregnancy.

Rasmussen said, “I did what I could in those early days of the unrest. The church community and the volunteers were so supportive of me in my obviously pregnant state. People were very kind and protected my physical health as I tended to the needs of others. It was an extraordinary experience of living through mutual aid.

“One of the refrains ringing through our church in this season is that there is enough for everyone: enough food, enough medical care, enough kindness, enough compassion, enough love.”

Seven days before her expected delivery date, Rasmussen was given a COVID-19 test, which is standard procedure at M Health Fairview University of Minnesota Medical Center where she would deliver. The test results were negative, and she returned home to wait for the arrival of her baby.

Rasmussen’s husband suffered a cardiac arrest five years ago, and the couple decided that COVID-19 exposure risk in the hospital was too great for him. They made the difficult decision that he would not attend the labor and delivery. He needed to care for their three-year-old anyhow. Because of COVID-19, neither set of grandparents could help.

When it was time for Rasmussen to deliver, her husband and daughter dropped her at the cul de sac of the hospital and waved goodbye.

Of that decision, Rasmussen said, “There was disappointment for both of us, but we knew we needed to take a long view. The most important thing was that my husband be part of our kids’ lives for many years to come.”

Lars Rasmussen was born at 12:36 p.m. on July 26. All during Rasmussen’s labor, the anesthesiologist held a cell phone up so her husband could be in the delivery room via Facetime. Rasmussen said, “The delivery went well, and Lars came out screaming just the way you hope a baby will.”

A moment of peace

Rasmussen’s planned three-month parental leave from work turned into a two-week leave instead. She is working part-time from home due to the extraordinary demands currently placed on the church. Her husband works from home as well, and they pass the child care baton back and forth.

The community of Holy Trinity Church participated in a drive-by baby shower at Rasmussen’s home a few weeks ago. Cars streamed by on a Saturday afternoon: one mask-wearing person at a time got out of their car, dropped a gift for Lars or the family on the lawn, and shouted “Congratulations!” as the next person pulled in.

Both sets of grandparents have come up to Minneapolis for backyard visits. Other family members have met Lars during Zoom calls. It isn’t what Rasmussen had in her original plan, but it’s the time the community is living in.

With so much on her plate, does Rasmussen have any quiet moments with her new baby? She said, “I feel most present with Lars right after he’s done eating, when he is satiated. His body is heavy and full, like he doesn’t have a care in the world. With him resting against my chest and shoulder, I’m given a moment of peace – and it’s enough.”

Calls for justice ring out as Chauvin trial gets underway

Seeking justice, caring for people: preparing for the days ahead