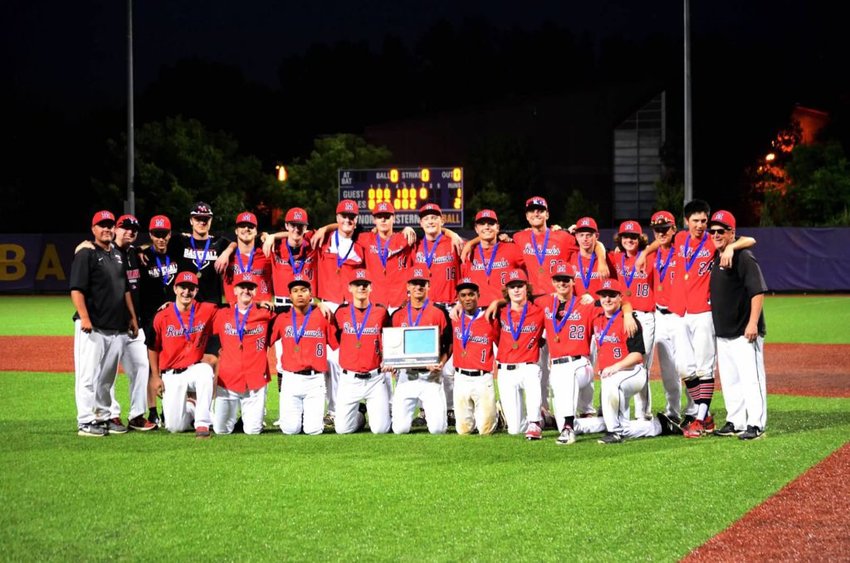 The Redhawks played a nearly perfect Class 2A state baseball championship game on June 20, 2019, but ended up losing 4-2 to Duluth Marshall when they scored three runs in the seventh inning. (Photo submitted by Minnehaha Academy)

Minnehaha Academy had everything clicking in the Class 2A state baseball championship game June 20,2019, before a late rally by Duluth Marshall to thwart the Redhawks’ title hopes.

The Redhawks built a 2-0 lead on top-seeded Duluth Marshall and carried the lead into the sixth inning. Things still looked promising for the Redhawks with a 2-1 lead going into the final inning at Target Field in Minneapolis. The Hilltoppers had only six hits in the game at the point, and their star pitcher Ben Pederson was rapidly approaching a 100-pitch day.

“We played almost a perfect game,” Scott Glenn said about the title game. “We had it set up exactly how we wanted it, and they just beat us. Not much we can say other than tip the hat to them.”

Duluth Marshall scored three runs in the seventh inning en route to a 4-2 win over the Redhawks. It started with a double and a fielding error that placed a runner on third to start the inning. Redhawks starting pitcher Brock Brumley exited the game.

Bennett Theisen entered the game in relief of Brumley, but he couldn’t stop the bleeding against the Hilltoppers soon enough. The Hilltoppers grabbed a 4-2 lead, and the Redhawks couldn’t answer with their bats in a hitless bottom of the seventh.

It ended a promising run for the Redhawks (20-5), which sought its third state title in four years. The Redhawks won back-to-back titles in 2016 and 2017, which had many of this year’s seniors on the roster. That included Brumley and Theisen, who pitched in the 2017 title game, won 6-4 by the Redhawks over Pierz.

Glenn said it was a good bookend to their high school careers. Theisen will pitch at the University of Minnesota next year, and Brumley will pitch at Division I Lipscomb University in Nashville, Tenn.

Senior shortstop Noah Dehne, who started all four years for the Redhawks, will play at North Dakota State University in Fargo, N.D. Dehne went 3-4 in the June 20 championship game.

Junior right fielder Jake McCabe drove in a run for the Redhawks, which scored Dehne in the third inning. Dehne drove in a run earlier in the inning when he got on base with a single.

Minnehaha Academy came into the game red-hot at the plate with a 9-1 win over St. Peter and a 12-5 win over LaCrescent-Hokah in the first two rounds of the tournament at St. Cloud June 13-14. The Redhawks had to face a MLB prospect in Pederson this time around with Duluth Marshall.

“We killed the ball,” Glenn said about the first two rounds. “We hadn’t done that all year. It gave us a good chance to get back to Target Field.”

While Glenn and company didn’t take home the first-place hardware, he hopes his players will keep things in perspective.

“To come so close, to end your career playing at Target Field, that’s a good deal. I think most kids would take that,” Glenn said.

Minnehaha Academy may not be done after this spring despite the graduation of 10 seniors from the team. Glenn believes the Redhawks can reload.

“It’ll be different, but I don’t think we’re going to miss a beat next year when you look at the pitching we have coming back,” Glenn said. “We’re going to have two soon-to-be senior kids who are both very good pitchers. We need to replace some key starters and find some hitters.”

“I think we should have a pretty good chance to get back at least to state,” added Glenn.