By PHOTO: DJR Architecture’s alternate plan includes the renewal of the Roof Depot building into an agribusiness powered by an immense solar array on the roof. That kind of facility would offer jobs that local residents would have the skills for, thereby cutting down on traffic while offering employment within the neighborhood. It also includes a bike shop along the greenway. Future phases include multi-use housing directly on the Greenway.

What would you do if you discovered that the city was planning to move a large-scale truck operation to an area you’d been trying to remove pollution from for 15 years?

What would you do if you learned that the city had been planning this for more than a decade and had just told your community leaders in November 2014?

What would you do if you were trying to find a way to provide jobs for the low-income residents in the neighborhood and realized that, as a water yard, the site would never fill that pressing need? 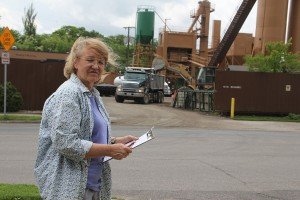 Well, if you are Carol Pass, president of the East Phillips Improvement Coalition (EPIC), there’s only one thing to do.

PHOTO: EPIC President Carol Pass and other community members are highly concerned about the additional traffic and pollution more diesel engines will bring the neighborhood surrounding the 28th St./Cedar intersection. That intersection is known to residents as the “intersection of death.” They’ve been working for over 15 years to remove pollution in this area. They are disheartened by the city’s plans to locate its water maintenance facility in a place where they would like to see an agribusiness that provides jobs to local, low-income residents. Community leaders only learned of the city’s plans in November 2014, as they mobilized against the existing polluting industries, Smith Foundry, and Bituminous Roadway hot asphalt mix plant. (Photo by Tesha M. Christensen)

You begin the community engagement that should have happened. You let the neighborhood know what happening, and you rally together to fight it.

This is exactly what the community has done before: staving off the Hennepin County Garbage Transfer Station at Cedar and 28th in the mid 1990s; keeping out the Midtown Eco-burner (Cogenerating Plant) in 2007; and convincing Xcel Energy to bury high voltage power lines in 2009.

The effort against moving the city’s water yard to the Roof Depot site at 1860 E 28th St. is being battled by EPIC, Tamales y Bicicletas and council member Alondra Cano’s office.

“This is a very important issue that affects all of Minneapolis,” remarked José Luis Villaseñor of Tamales y Bicicletas.

“This is unconscionable,” stated Pass, who has lived in Phillips neighborhood for 40 years. “The process and proposal are against everything we’ve ever tried to do, and this is against the city’s own goals and strategic directives set forth by the Mayor and Council.”

Pass pointed out that the city’s number one core principle of community engagement is that residents who are affected by a decision have the right to be involved in the decision-making process.

“This thing started in 2001, and we never heard about it until last November,” said Pass. “They conspired against the neighborhood in the face of their own core neighborhood principles.”

PHOTO: A bicyclist along the Midtown Greenway waits in the center of 28th Ave. to cross safely in front of a semi tractor-trailer and a long line of cars. Community activists have been pushing to de-industrialize this area and capitalize on its proximity to light rail, bus and bike routes. However, the city is hoping to reuse the Roof Depot site adjacent to its existing public works facility as its water yard. (Photo by Tesha M. Christensen)

In fact, neighborhood leaders were only notified of the city’s plans as they mobilized against the existing polluting industries—Smith Foundry and Bituminous Roadways hot asphalt mix plant. Local legislator Karen Clark supported that effort by proposing a bill in the House to remove the “grandfather” status of these industries in an area not zoned for such heavy use.

Community engagement principals aren’t all the city is neglecting, according to activists. Per a directive by Mayor Betsy Hodges, the city is also working to reduce racism in the city.

“What is racism?” Pass questioned. “Racism is doing things like this to people like this, low-income families and children of color. It’s what you do to people who have less political and financial strength than the people making the decisions. “This is racism.”

She and others in south Minneapolis firmly believe that the city would not be trying to relocate its water yard to a part of Minneapolis where residents were wealthier and white.

Replacing the maintenance yard is the last major unfinished piece of a 25-year-old master plan for updating city Department of Public Works facilities.

“These trucks have tires as high as my shoulders,” said Pass.

It isn’t merely the increased congestion on streets that are already busy that worries residents. They’re also worried about the pollution the diesels emit.

Studies have linked diesel engine emissions with asthma attacks, heart attacks and cancer, pointed out Pass. A study completed by Abt Associates, commissioned by the Clean Air Task Force, found that fine particle pollution from diesels shortens the lives of nearly 21,000 people each year.

Neighborhood residents say they are deeply concerned about neighborhood residents who suffer from a high level of asthma. According to the Minnesota Department of Health data, over 200 of every 10,000 people in the area (south Minneapolis from downtown on the north to Minnehaha Ave. on the south) are hospitalized for an asthma attack every year.

That record makes it one of the worst areas in the metro.

“People here shouldn’t have to live and perhaps die of asthma because they’re poor,” said Pass.

Additionally, the worst pollution falls on the football field of South High School, a few blocks south of the area. Pass pointed out that childhood ADHD has been traced to increased exposure to the very types of pollution that are found coming from these various industries. In a study conducted by researchers at Columbia University’s Center for Children’s Environmental Health, all of the kids who tested positive for exposure to this type of pollution were suffering from ADHD.

“Every single one,” stressed Pass. “I am not an alarmist to say we are poisoning our kids and robbing them of their future. There is no question about it.” Pass strongly believes that this neighborhood is already carrying a heavy enough burden without the city adding to it.

Council member Andrew Johnson, whose ward borders the Midtown Greenway, agrees that we should all take the environmental concerns in this area seriously. However, he questions whether 170 additional vehicles a day would have that much of an impact on either pollution or congestion.

Johnson thinks that a water yard would be a low-impact use as opposed to other possibilities. He also pointed out that the city has offered to set aside about 30% of the property it doesn’t intend to use for community development.

A longtime neighborhood activist, Pass is pessimistic that this would actually happen. She pointed out that as the city grows, the water plant will need to grow with it.

On Monday, June 15, Ward 9 representative Alondra Cano asked the City’s Ways and Means Committee to vote against the proposal.

Instead, it was passed on a 4-1 vote with council member Johnson abstaining.

He acknowledged that it is rare for the city council to approve something in an area that its representative is against, but pointed out it was done recently when the city approved Southwest Light Rail.

On Friday, June 19, the city council vote 10-3 to move forward with negotiations for a purchase agreement on the Roof Depot site. Council members Johnson, Cano and Cam Gordon voted against the measure.

In explaining his vote to fellow council members, Johnson pointed out that he doesn’t think the water yard is bad in itself. However, by moving the city water yard to this area it removes the ability of the community to move forward in its own self-determination.

“We have a project that is viable if the city will let us do it and move out of the way,” said Pass. “It would transform this whole area, which really is the gateway to the city from the airport, but now is an industrial eyesore.”

This alternate plan, designed by DJR Architecture, includes the renewal of the Roof Depot building into an agribusiness powered by an immense solar array on the roof. That plan would offer jobs that local residents would have the skills for, thereby cutting down on traffic while offering employment within the neighborhood.

The solar array would be one of the largest in the state, and it is Villaseñor’s hope that those with the knowledge of how to create solar arrays would then turn around to help local homeowners with smaller-scale projects.

A bike shop could be situated right on the Greenway. These businesses would not require any rezoning of the property.

Future phases include mixed-use housing where the asphalt plant and foundry are currently located.

This would completely alter the area currently known by residents as “the intersection of death” for its toxic fumes and high rate of traffic accidents.

When measured against the city’s overarching goals for transit and housing, “it matches everything the city wants,” Pass observed.

Council member Johnson agrees that this location near light rail, buses, and bikeways make it a prime one for development.

“If we de-industrialize this site, we make this whole area a virtue for the Greenway,” Pass said, “and not a place where people now hold their breath as they bike or walk through this area because of its bad smells and dangerous air.”