RESTORATIVE JUSTICE: Just what is it? 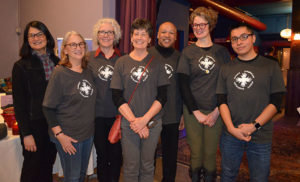 Michele Braley has been wrestling with the issue of justice for a long time.

She’s part of the Seward Longfellow Restorative Justice (SLRJ) group formed 18 years ago when residents of the two neighborhoods came together to explore how they could grow restorative justice practices in their neighborhoods.

“The creation of SLRJ is a story of grassroots volunteer engagement that I hope still inspires the community today. There were several earlier initiatives including a long-running peacemaking circle in Seward,” said Braley.

“After many conversations and much planning SLRJ received its first referral in 2005 for an incident of graffiti on a business in Seward.”

The Messenger asked Braley to explain what restorative justice is and how it works.

What is “restorative justice”?

Braley: While many people know restorative justice through the modern movement it is not a new idea. Restorative justice has its roots in Indigenous teachings. One of these influences, as I understand it, is the idea that harm between individuals is a breaking of relationships that requires the community’s assistance to repair. Another is that there is no one universal truth – the goal of restorative justice is not to respond to one “truth” (i.e. what law was broken) but to understand the harm caused, from each person’s perspective, and to work together to make a plan to repair the harm.

The murder of George Floyd has increased the urgency to go beyond restorative justice which responds to individual harms and look to transformative justice which emphasizes transforming the systems that contributed to the harm. An idea for transformative justice that is resonating with me as I think about the mission of SLRJ is for Hennepin County to decriminalize youthful behavior. We know from brain development research that making bad decisions is part of the normal journey from childhood to adulthood. Currently, children as young as 10 years old can be cited for breaking laws including shoplifting, trespassing, and property damage. What if we treated the behavior as a learning opportunity instead of a crime? Another example comes from New Zealand where youth who break the law are referred to restorative justice first, and then a small number of youth are transferred to the legal system. In Hennepin County the process is reversed – youth are entered into the legal system first, and then a few youth are determined to be a better fit for restorative justice.

How do you help bring about restorative justice?

We primarily work with youth referred by the Minneapolis Police Department and the Hennepin County Attorney’s office. The youth are given the opportunity to participate in a restorative justice process instead of having their citation referred to the juvenile justice system. We also work to build a more restorative culture through training and consultation for organizations that are re-thinking their policies around discipline.

We have worked with hundreds of youth cited for incidents ranging from small thefts to property damage in the tens of thousands of dollars. While the process is tailored to each situation there are standard elements. We meet individually with both the person who did the harm and the person who was harmed. Then, we bring everyone together, including supporters, community members and our trained facilitators, for the restorative conference. The conversation focuses on what happened, how did it cause harm, and the creation of a plan to “make things right.” Since makings things right also means not doing it again, plans to repair the harm might include activities such as enrolling in summer school, doing a job search, and doing career or college preparations.

Unfortunately, restorative justice has limits in making things right in a legal system that does not treat people equitably. In Hennepin County we have huge racial disparities in the juvenile legal system. While youth of all backgrounds break the law at similar rates, black and brown youth are disproportionately given a citation. While it’s preferred for youth to get involved in restorative justice instead of the legal system, as a community we need to commit to anti-racism and transformative justice to ensure that all people are treated equitably when they break the law.

Is this something done along with police or in place of police and the judicial system?

While most of our referrals have come through police citations – it’s important for the community to know that we do not need a citation to do a restorative process. Over the years we have received direct requests to help neighbors resolve incidents including graffiti, theft, property damage and assault. The person harmed did not believe a police citation would lead to a positive outcome for them or anyone involved. What they wanted was to speak directly to the person that harmed them.

How are you adjusting things in response to COVID-19, George Floyd’s murder and the loss of your building?

In mid-March we shifted to working from home. We are doing restorative justice processes through video technology and are continuing to respond to requests for virtual training and consultation about restorative justice. Like everyone, SLRJ is trying to make the best of a tough situation by continuing to serve youth and the community as best we can.

After 14 years of sharing an office with Seward Neighborhood Group, just over one year ago SLRJ moved into its own office and became an independent non-profit. Our new office was in the Coliseum building at Lake and 27th Avenue, which experienced substantial damage during the unrest.

We salvaged almost all of our furniture and program supplies, which are in storage as we work from home for the foreseeable future. Of course it was devastating to lose our first independent office – which was a reflection of the hard work and vision of everyone who helped grow SLRJ into a non-profit. On the other hand, the loss of our office forces us to reflect, with the rest of Minneapolis, on the ways our program and approach have not done enough to move our city towards equity for everyone.

When I went to my office to empty it out, I spent time reading the graffiti on the sides of the building. One image stays with me, “You didn’t like silence. Are we loud enough?” While we could dwell on the loss of our office and debate about who did the damage, I think it’s more productive to move forward with a commitment to deep listening and to deeper examination of how RJ and SLRJ can be part of moving our city towards greater equity.

How can people get involved?

Unfortunately, we are not currently offering any volunteer training. I anticipate there will be future opportunities for the community to engage with our program and vision. In the meantime, people can tell the City Council that they want restorative justice and Seward Longfellow Restorative Justice to be part of the solution to relying less on police. You can follow us on Facebook https://www.facebook.com/SLRJP or drop me an email (Michele@SLRJ.org) so I can add you to the list of people who receive program announcements. Individual donations are a large part of our budget. Currently we need to rely even more on individual donations as activities that normally generate income for us, such as trainings and presentations, are postponed.

SLRJ was created by this community and the future of the program will be shaped by this community’s desires and needs. Eighteen years ago SLRJ was a radical program. Now, restorative justice and the idea of helping youth in a community process instead of in court have become almost universally accepted. It’s time for the community to make SLRJ radical again. Maybe it’s time for Seward Longfellow Transformative Justice and a commitment from our community to change the legal system into one that actually brings justice for all.