South High students walk out to support All Nations program 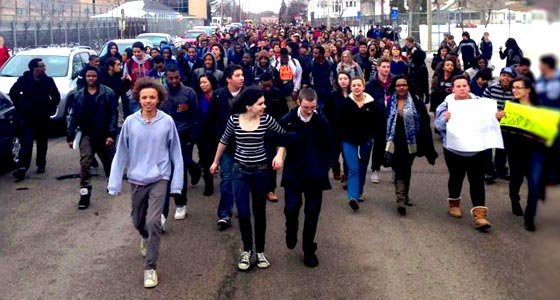 Between 500-1000 students at South High School walked out on Monday, March 13, 2013 to show their support for the All Nations program and to ask for more cultural awareness at their school. (Photo courtesy of Minneapolis Youth Movement)

What began as a protest by Native American students grew into a walkout that united all ethnic groups at South High School on Monday, March 11.

Organizers estimate that 500-1,000 students peacefully walked out of the school in a show of solidarity.

The event was organized by senior Winona Vizenor, a Native American student enrolled in the All Nations program. The walkout came three weeks after a riot at South High on Feb. 14 that involved up to 300 students and required police intervention. After seeing the Somali students stand up for themselves following the riot, W. Vizenor was inspired.

“We wanted to organize something so we could be heard,” said W. Vizenor.

“We’ve tried talking to the principal, and we were brushed off,” said W. Vizenor. “We don’t have a teacher in our program who stands up for students.”

WHAT IS THE ALL NATIONS PROGRAM?

The All Nations SLC program at South High is a program within a program at the high school. It began in 1989, and is open to students citywide. In addition to the typical math, English and science and other standard classes, Ojibwe culture and language are offered. Ninth and 10th graders enrolled in the program take classes only with other All Nations students; upperclassmen are integrated with the rest of the student body.

However, in recent years several pieces of the program have been eliminated, including the drum group and smudging.

During an assembly in the 700-person auditorium on Monday morning, March 11, prior to the walk-out, students told fellow students, community members, school staff, Principal Cecilia Sadler, Director of Indian Education Danielle Grant, and Minneapolis Public School Associate Superintendent Stephen Flisk that they don’t feel they are “getting the full cultural program they could be getting,” said Lisa Bellanger, from the Minnesota Transitions School who attended as a community member.

“They want it to be enriched,” said Winona’s mother, Lynette Vizenor. She added, “The program has been falling down, and the students feel that.”

L. Vizenor pointed out that this spring, her daughter will graduate with only one-fourth of the students who entered the All Nations program with her in ninth grade. The rest have dropped out, been suspended or received academic transfers out of the school. At one time, the suspension rate for Native American students at South High School was so high that it was garnering attention, she pointed out. Today, the rate of academic transfers out is high.

“There is still segregation and racism,” L. Vizenor remarked. “There is a problem with administrators.”

Native American students have asked that they be allowed to smudge once more. Smudging involves the burning of sage in a ritual of purification. “It’s a way of cleansing when you feel bad,” explained L. Vizenor. “They find strength in that.”

They have also asked that the drum groups be returned.

And they’ve asked that students not in the All Nations program be allowed to participate as desired. They want to be more integrated with the rest of the school, according to W. Vizenor, and to have other students attend the All Nations classes if they wish.

With that in mind, W. Vizenor asked students from many different ethnic groups to speak at the assembly held prior to the walkout.

“All recognized the need for diversity and gave a powerful message about learning and recognizing each other.” Bellanger. “I was really impressed with them.”

“If this is an example of the young people coming up, I’m very happy.”

FROM ASSEMBLY TO WALK-OUT

W. Vizenor had initially planned to organize a walkout, but then agreed to work with school staff to hold an assembly inside instead. Her main stipulations were that any student at South High who wanted to and any community member be allowed to attend. However, during the event, she learned that there were people from both groups who were not allowed in, and at the end of the assembly, she asked those in attendance if they wanted to proceed with the walk-out. They did.

“The walk-out was successful and peaceful,” said W. Vizenor.

The drummers followed the students out of the assembly into the street to help keep the students focused on peace and unity, noted Bellanger.

The school locked the building down during the walkout. As part of that, administrators said they would not allow students back in to get items they left inside, including their coats and house keys. However, after local Native American activists insisted students had the right to get their things, administrators agreed to allow students back in one at a time with supervision, according to W. Vizenor.

Students were also warned before they left the building that their departure would constitute an unexcused absence and that they would not be allowed back without a parent. They were welcome back the next day.

Following the walkout, 50 students gathered at MIGIZI Communications at 3123 E. Lake St. to discuss their next steps. They said that they felt good about what they had accomplished that day. They said they wanted change. And they challenged each other to stay responsible.

The students have formed the Minneapolis Youth Movement, which can be found on Facebook. They intend to start meeting with people from other schools to broaden their understanding of cultural awareness, according to W. Vizenor. Once they’ve listened to each other, they plan to approach the school district with ideas for change.

Their parents and other adults have also taken up the call to action, and plan to begin meeting. To get involved, contact Lynette Vizenor at either lynettevizenor@rocketmail.com or call 612-481-3266.