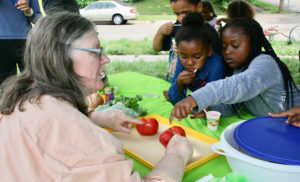 When Bonnie Everets was only four years old, her family bought a vineyard and fruit farm upstate New York and the family moved from town to the country. For Everets, it changed everything.

“The instant we got there, I became interested in being in nature. It was like my own secret garden,” she said. “I worked in our vineyard with my father, driving a tractor as soon as my foot could reach the clutch, at about seven years old.”

It set her on a lifelong path of discovery, exploring and teaching.

When she was in fourth grade, she was out exploring when she discovered a hillside with a number of different kinds of mosses, each a different color. She took samples, transplanting them to a terrarium to study. A trip to the library helped her learn more. “Then, I took the mosses to school and taught the other students what I had learned,” she said.

Later, attending Hope College, Everets focused on art, English, German and theater, spending her junior year in Turkey. After earning a master’s degree in archeology at the University of Chicago, she received a Bush grant and moved to the Twin Cities in 1974 to work as a member of the theater ensemble at URBAN Art’s program. She later worked at the Walker. She ended up in real estate to support her creative and artistic projects with a flexible schedule.

Meanwhile, her son, Graham, was attending the Friend’s School, thriving in their holistic approach to teaching. But, in sixth grade, he asked his mother if he could be homeschooled. His mother agreed.

“My experience with Graham allowed me to recognize an exciting holistic approach,” she said. And, it helped her understand that all kids needed to be exposed to the advantages offered to Graham.

Everets realized that most schools, even the best, couldn’t offer everything kids needed to learn during regular school hours. “We have a major achievement gap in Minnesota. But, I know how smart these kids are. Giving these kids enrichment time after school, on weekends and in the summer will help put them on a more even level,” she said.

“We needed to go into the community where the kids live.”

“I owe a big debt to State Senator Patricia Torres Ray,” said Everets. Torres-Ray connected her to the Minnesota Science Museum to set up one of their first big events in 2012.

That event was Nano Days, part of a national movement, that lets grade and middle school students study science on a molecular level. “This lets kids see the fun and excitement of science. They won’t think science is irrelevant or that it’s hard,” Everets said.

“It exposes them to opportunities they might not otherwise have, and it gives kids and their families who probably don’t go to museums the chance to have the museums come to them.”

The Science Museum became a chief sponsor, supplying NanoDays Hands-On Activity Kits, along with volunteer scientists and educators, to give students practical experiences in real science letting them see science as part of their world.

State Senator Torres-Ray, continues to be a strong supporter of Everets’ work. “Facilitating a partnership between the Science Museum and SELF, International was an essential step to insure that SELF’s mission to increase and expand community access to science becomes a reality,” she said.

They didn’t know where food came from before

“Bonnie is a great person. She’s dedicated and the kids love her. There aren’t a lot of behavior problems because they really respect her,” said Boys & Girls Club in the Twin Cities Area Supervisor Mark Graves.

“The kids grow the vegetables, and we use them for our snack and dinner programs. The kids learn overall knowledge of the importance of growing your own, the skill and patience that it takes to have a successful garden,” he said.

Everets added, “Most of these kids don’t have houses with yards. They don’t know where food comes from or how it grows. The program focuses on the science of food. So, we brought in pros. We brought in soil scientists, and food scientists. We studied bacteria to make yogurt. They learned about insects and food preservation. It shows the kids that there’s science in everything, so we get to create a science identity as early as possible.”

In her spare time, Everets is writing a cookbook based on her urban garden experience. “It’s an A to Z cookbook for children and their parents. It’ll show what to plant and then what you can make with it.” She plans on doing her own illustrations and is currently searching for a publisher.

Other programs offered by SELF International include ‘Building with Biology’ and ‘Let’s Do Chemistry.’

“Because we move directly into the neighborhoods where students live, we collaborate with local schools and community organizations,” she said.

SELF International just received a mini-grant to start a new program for middle school-aged Latinx students and their families. They are currently scouting locations for the program and looking for interested collaborating organizations.

There are no paid positions at SELF International, so there is always a need for volunteers who want to work with kids. Contact Everets at beverts@selfinternational.org.