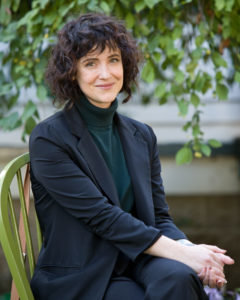 When Ward 12 resident Kate Stevens was growing up in a small town outside Sioux City, Iowa, she was, by her own description, “a naughty teenager.” She got herself into some trouble, and had one appearance in court. It was a brief foray into the criminal justice system, but it set her on something of a path. When her probation officer asked, “What do you want to do with your life?” She answered, “I don’t know. Maybe I’ll get your job.”

Instead of becoming a probation officer, Stevens became a lawyer. She worked for several years as a public defender in Sioux City, Iowa, where she represented children in juvenile delinquency / child welfare cases. She began to notice a chronic pattern of disparate treatment between children whose families had financial resources and those who didn’t. The poorer families typically were also black, indigenous, or people of color (BIPOC). She saw how these disparities impacted every aspect of their lives.

Remembering her own experiences as a teenager, Stevens said, “My family was white, middle class, and intact at the time. That meant I had options, while kids from different family situations did not.”

Stevens and her husband moved to the Twin Cities in 2016. She took a job with Hennepin County, working to resolve custody cases in the best interests of the children involved. She applied for a seat on the Minneapolis Commission on Civil Rights (MCCR), but wasn’t chosen. When she applied again in 2019, she was.

She said, “I’m determined to educate myself, and to collaborate with community members and leaders who are eager to create real change. I’ve spent a lot of time talking with county employees about racial disparities. Now I want to do something to address those disparities in our community. Joining the MCCR meant taking a step in that direction.”

Currently, MCCR is focusing on police brutality and racism within the Minneapolis Police Department, the impact of COVID-19 on BIPOC, and equity/inclusion within city contracts and workforce initiatives. The commission is grappling with, and trying to better understand, what they call the “pain points” in this community.

Anyone can file a complaint with the MCCR if they feel they have been discriminated against. To learn more, visit www2.minneapolismn.gov/civilrights/.

Stevens said, “I’m hearing from a lot of people that this time, things feel different. There is finally a growing understanding of how systemic racism works.”

She continued, “I can remember clearly when my own awareness kicked in. I was working in Sioux City, and had a caseload of kids being held in detention longer than they should have been. Why? Because some had a single parent who worked second or third shift at night, or maybe their family couldn’t afford a fancy electronic monitoring system. These outcomes were unfair, and they are deeply entrenched in the way our society works.”

MCCR implements the city's civil rights policies through public information and education. The primary objective of the commission is to promote and protect the civil rights of the people of Minneapolis. There are currently 19 commissioners who represent wards across the city. Commission meetings are held on the third Monday of each month, and are open to the public. Kate Stevens can be reached at kathryn.stevens@minneapolismn.gov.

MCCR currently has 19 commissioners, but there are 21 seats. There are two current vacancies and several terms expiring in December 2020. Terms typically last three years. Adults from varied backgrounds are encouraged to apply. The public can call into virtual monthly meetings, as well as listen and give comments. Learn what the commission is doing, and consider getting involved with their initiatives.