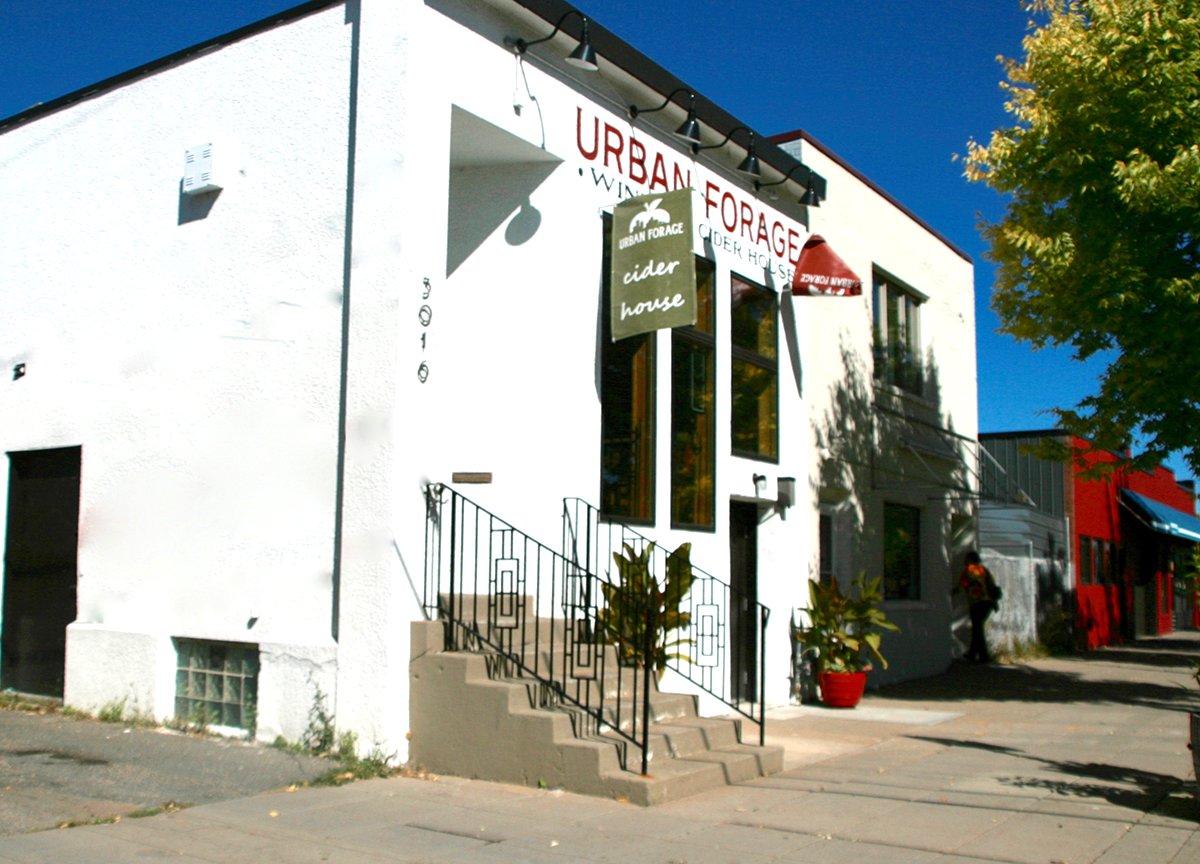 Urban Forage Winery
and Cider House
3016 East Lake Street
612-584-4398
Tasting room just opened
Urban Forage Winery and Cider House creates wines and hard ciders made from local ingredients.
The idea for Urban forage Winery began when Jeff Zeitler was laid off his job as a landscape architect. But, instead of succumbing to gloom, Jeff and his wife Giga Rijal saw the situation as an opportunity. It was a chance, Zeitler said, to fulfill a long held dream of opening a winery. They knew of a vacant property on E. Lake St. and rented part of the building in 2012. But before they could make products, they had to jump through the confusing hoops of Minnesota state regulations.
Zeitler wanted to get a license to open as commercial winery, but the people he talked to at the state offices said there was no such thing and he needed to have a farm. Wineries in cities, they told him, couldn’t get licenses. He knew differently. “No one there knew about the other class of licenses,” he said.
He hired a lawyer who intervened, pointing out to state regulators that there was actually something called a commercial winery license. In 2015, Zeitler opened Urban Forage Winery and Cider House.
Their first product was a dry cider made with local apples, a refreshing drink for any season. They soon added a lightly sweetened fruitier version.
“Sales were OK, but we quickly realized that we needed a taproom. Most people want to see how the wine is produced. Once we did, we started to get busy. People were finding us. By 2019 we were doing very well. We were packed on Thursday trivia nights, Sunday’s tastings and Saturdays. That year was a good year for us. We planned to open five days a week in 2020 and expand our food options,” Zeitler said.
But, then came the pandemic. “The week of St. Patrick’s Day we had to close. It was devastating. We didn’t know how long it would last and thought by Memorial Day, it would be fine. We kept making cider.”
But, unlike beer, wine and cider maker like Urban Forage are dependent on local ingredients for their cider and have to plan their products a year ahead.
“When dandelions, cherries, rhubarb or apples are in season, we have to harvest. Our tanks were full. We had a reality check because things weren’t selling at the pace we expected because the taproom was closed.”
Then came the riots. “We were looted. Fortunately in the three days of rioting all they took was some money and some cider. It wasn’t as bad as it could have been.
“The looters were just looking for alcohol and money. Every lock was broken but the taproom was spared,” he said. For weeks, the windows were boarded up but finally opened the taproom doors to customers on Sept. 24, for on and off-sales Thursdays through Sundays with patio seating when the weather allows.
They still have a number of ciders and wines to choose from, but are currently sold out of the dandelion wine (a customer favorite), Louise, a white Midwestern wine, Blueberry mead melomel, their higher-alcohol dessert style plum wine.
But, there are still plenty of choices. “We add honey for gin botanical cider with gin spices,” said Zeitler. “We make black current cider, our best seller. We even make a carrot wine, (which gives the impression of a light-bodied white wine with a hint of carrot flavor) and a banana/pineapple wine.”
Coming soon, red velvet melomel, a mead with blueberry, currant and aronia (chokeberries).
In addition the taproom offers gluten-free pizza and cheese plates to go along with the wines, meads and ciders.
“We are excited to have people back here,” said Zeitler.” I miss having a busy taproom. I will be glad when this pandemic is over. It’s fun when the place if full. I’m looking forward to having a lively crowd.” And, if you can’t attend the taproom, bottles are available to take home.

DREAM OF WILD HEALTH FROM FARM TO MARKET

Community Driven: Delivering free food to those who need it most