‘We just want our lives back’ 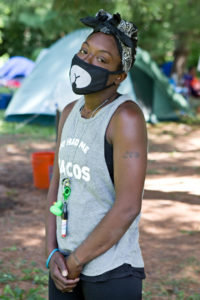 With three college degrees, Bunni ended up broke and homeless last December. She hopes to get permanent housing in September. (Photo by Margie O’Loughlin)[/caption]

Bunni (last name withheld on request) has lived in Minneapolis since 2007. She moved here for college, and ended up with three degrees in art, business, and law enforcement.

Last December, she also ended up broke and homeless. There was nowhere for her to live, so she parked her van across from Powderhorn Park with her dog and called it home. From December to March, it was cold but quiet.

In the aftermath of the uprising, Powderhorn Park began to fill up fast. Eventually a group of Native American women decided to leave the park for safety reasons. They moved to a new encampment in the Longfellow neighborhood just for women, and she went with them. Bunni was formerly married to a Native American man. Of his community she said, “Once you’re welcomed in, you’re part of the family. We stick together in the native community. We share our last. We give until it hurts.”

There have been major problems in the start-up phase of the Longfellow encampment. Four ill-intentioned men, who self-identified as protectors of the women, were evicted by a coalition of encampment residents and Native American leaders on July 13. Almost 100 people descended on the encampment that night and literally shouted the four men out.

In the eight days since the encampment began, the residents find themselves starting over again – supposedly with a coalition of women leaders this time.

On the day of this interview, Bunni had just secured affordable, permanent housing which, unfortunately, wouldn’t become available until September. She said, “In addition to a roof over my head, I’m hoping for safety, recovery, and healing. I could really use your prayers.”