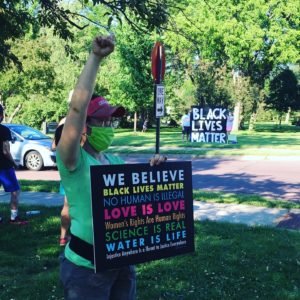 Stefanie Beniek is driven to be a visual reminder every Monday night from 5-7 p.m. at Minnehaha Parkway and Nokomis Ave.

The group of local residents started gathering at that corner shortly after George Floyd was murdered a mile away at 38th and Chicago, pulled together by Tanya Ketcham via a Facebook event.

Beniek and her husband, Tim Hereid, have lived near the Keeywadin school campus for 10 years.

In addition to helping organize the twice-weekly protests in Nokomis East, Beniek has been volunteering at the Calvary Food Shelf at Chicago and 39th. She’s also working with Acupuncturists Without Borders to start a clinic to help people protesting nearby process trauma. 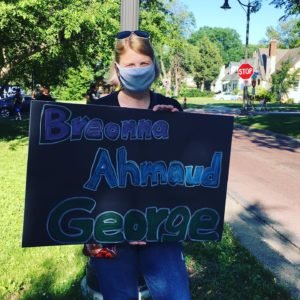 The attendance at the corner of Minnehaha and Nokomis has waxed and waned since it started the week after George Floyd died. On nights when it is larger, such as the evening after George Floyd’s memorial, they have a moment of silence at 6 p.m. There might be a few speakers. Someone might roam around with a petition.

The response from passersby varies, too. On Friday, June 12, 2020, they received a lot of “thank yous” and fists held high from drivers and bikers. One woman yelled, “Thanks for keeping it in front of our faces.”

Nokomis Community School - Wenonah campus second grade teacher Rebecca Priglmeier is driven to protest because of her students, “who had to be witness to all of this, as if this year wasn’t hard enough.”

Priglmeier explained, “I think white people need to be allies. This isn’t going to change without everybody’s help.”

She pointed to the 88 people of color killed by police this year in the United States, and school shootings. “I want kids to not have to live in fear - especially not kids of color. It’s enough. It has to stop.” 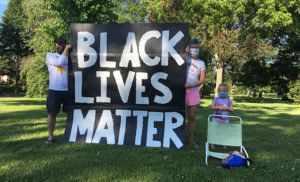 ‘We can no longer be silent’

Nick and Rebecca Kimpton, and their four-year-old daughter, Bea, stood with a large Black Lives Matter sign on Friday night, June 12. They bring their young daughter along because “it’s never too early to teach about race and teach them to be part of the solution,” observed R. Kimpton. They hope their daughter grows up to be part of the change.

“We feel like there is a lot of momentum right now and we want to keep it going,” said Rebecca. “Finally some real change can happen.”

They’re working to be more aware, and to talk to the people in their circle of influence – within their family, neighborhood, and workplace.

“Ever since the murder of George Floyd, we knew we needed to take a more active role in change in our city,” added Nick. “We’re here because now is the turning point in our society to dismantle the systematic racism. We know we can no longer be silent.” 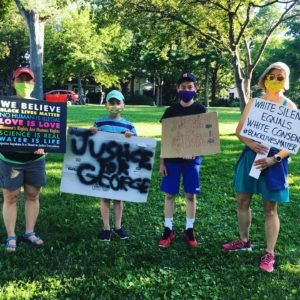