What about those boxelder bugs? 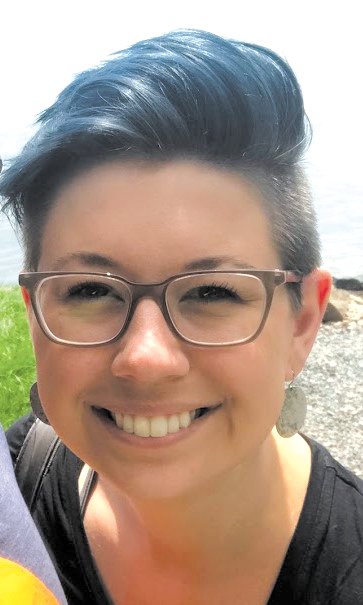 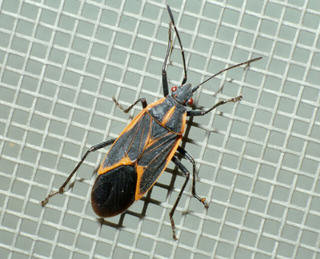 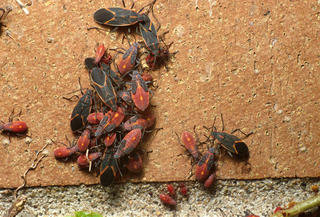 As the weather gets colder, insects start looking for warm places to spend the winter. Boxelder bugs are a particular nuisance this year – they love hot, dry conditions, so the weather we had this summer was perfect for their population to skyrocket. My spouse’s office building has been overrun with boxelder bugs in the past few weeks and they’ve been a major annoyance for him and his coworkers! I thought this would be a great time to discuss this common pest and give you a few research-based tips to help make sure they stay outside.
The good news is that, although they can be irritating, boxelder bugs don’t damage plants, bite people, or spread disease. However, you’d still probably prefer if they didn’t come in the house!
Adult boxelder bugs are about a half inch long and are black with red markings, including three stripes right behind the head. Their bodies are red or dark orange under their wings, which you may see as they fly. Immature boxelder bugs are 1/16 inch long and are bright red with black legs. They change to red and black as they mature.
This time of year, you may see large numbers of the bugs congregating in warm places. Boxelder bugs are particularly attracted to buildings with a lot of southern or western exposure. As the weather cools, they seek out small cracks and spaces around homes and make their way inside, often hiding in walls or attics. Over the winter, they are mostly inactive, although you may see a few around on mild, sunny days.
When the weather warms in the spring, the insects become active again. They try to move outdoors but may become trapped inside your home. Importantly, boxelder bugs do not reproduce indoors – if you see them in the spring, they have been in your house since the previous fall.
Because of this, the best way to prevent a boxelder bug problem is to seal up small gaps and cracks in the exterior of your home. Check for damaged window and door screens; cracks where cables, wires, or pipes enter your house; openings around dryer vents; and gaps under doors. Try to seal all openings 1/8 inch or larger. Depending on the size of the opening, you can use caulk, expandable foam, wire mesh, or other sealant most appropriate for the location and material of your home. As an added benefit, this will also help keep out mice and other pests who may try to get into your house this time of year.
Generally, there is no need to use pesticides for boxelder bugs – and it won’t help much anyways. They don’t reproduce indoors, and during their active season, they only live for a few days. Spraying insecticides won’t prevent more bugs from coming in if you haven’t sealed up holes and gaps. If you have a lot of boxelder bugs on the inside or outside of your house, try vacuuming them up with a shop vac and tossing them in the garbage. For a smaller number, sweep them up with a broom and dustpan. They release a bad odor when crushed and may stain surfaces, so avoid crushing them if you can.
You may wonder if removing boxelder trees from your landscape could help reduce the number of boxelder bugs around your home. Boxelder bugs do feed on the seeds of boxelder trees, but they also eat other types of tree seeds, so it won’t necessarily help much to remove boxelder trees from your yard. And boxelder bugs can fly several miles, so trees elsewhere in the neighborhood may be host to boxelder bug populations.
Overall, boxelder bugs are annoying, but taking a few simple actions now can help keep them (and other pests) outside all year long.
For more information, check out the University of Minnesota Extension Yard and Garden website. Extension resources are written by experts and contain the latest and most reliable research-based information. Happy gardening!

How to create a food forest