Will a floating yellow curtain help with the trash problem at Lake Hiawatha? The city has embarked on an eight-week pilot program to answer that question. 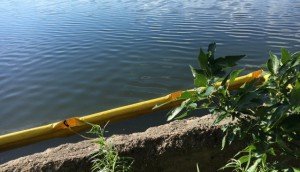 The litter catchment (Photo left) was installed near the city’s stormwater drain on Aug. 8. Following the first major rain storm on Thursday of that first week, it broke from its moorings and released trash back into the lake.

“It is understandable that after a big storm like that one with 3 inches of rain, the first test of the catchment should fail,” remarked neighborhood resident Sean Connaughty, who has been pushing for a catchment at the stormwater drain for two years. “But still, it was very disappointing to see the lake again full of garbage after the expectation of a reprieve. So, it remains to be seen whether or not this temporary catchment can be effective.” 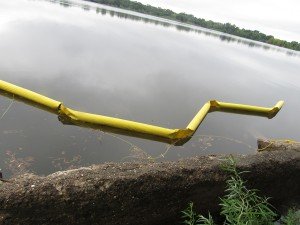 Photo right: Within a few days of being installed, the trash curtain came unmoored following a heavy rain. (Photo submitted)

Trash collected once a week

City crews plan to visit the site to remove trash about once a week during the eight-week pilot project. Crews will note the following during each site visit:

• Trash in the vicinity, or visible in lake, not caught by the curtain

• Condition of the curtain

“The pilot project was initiated partly in response to requests from citizens concerned about trash in the lake,” observed Minneapolis Surface Water and Sewers Director Katrina Kessler. In the first week following the installation, she received a number of positive comments about the project from citizens.

“I’m really happy that the city is listening and working to change the situation at Lake Hiawatha. The amount of debris and pollution that comes off our streets and goes directly into the lake is astounding,” said Ryan Seibold of the Friends of Lake Hiawatha. “We have to be better caretakers here, as this spot is like a sanctuary for an abundance of animals and waterfowl, many of which are migratory.”

Seibold added, “A lot of credit goes to Council Member Andrew Johnson for pushing for the temporary mitigation and working with Public Works, and to Sean Connaughty for convincing the city that a major source of the pollution is coming from the north end storm sewer that drains the neighborhoods to the north, a very urbanized subwatershed of Minnehaha Creek.”

“This shows that the city and parks finally recognize and acknowledge the seriousness of the problems this storm sewer is causing in the lake,” stated Connaughty. Last summer Connaughty collected over 60 bags of trash from the lake while walking with his dog.

During this year’s Minnehaha Creek Watershed Clean-up in July, over 5 tons of trash was collected—a record amount. As the creek flows through Lake Hiawatha, it was included as part of the clean-up. The Friends of Lake Hiawatha gathered petition signatures for a mitigation solution during the clean-up.

“In September we will be gearing up for some more projects and looking for more members from the community to join us,” said Seibold. “A lot remains to be solved with regards to pollution issues within the watershed, groundwater pumping from Hiawatha Golf Course, and future flood mitigation and ecological planning. The landscape could be more absorptive and resilient than it is today.” More at friendsoflakehiawatha.org.

Long-term, Johnson has been pushing for a trash-grid chamber and other mitigation infrastructure to improve water quality, such as open wetland filters, but these efforts have been delayed by the groundwater pumping situation that came to light. “Until this is resolved, I hope this temporary catchment proves an effective solution to reducing pollution,” said Johnson.

Seibold is excited that the voices of a few passionate people are bringing about change. He points out that even though it’s a small lake, it’s connected to so much more, and affects the health of water and wildlife down the Mississippi River to the Gulf of Mexico.

“I want to be sure to emphasize that the pilot project will not solve the trash problem,” stated Kessler. “Trash is the result of human behavior. It is especially important that people concerned about the lake be vigilant about picking up after themselves and encourage their neighbors and local businesses to do the same.”

One specific way people can help is by participation in the city’s new Adopt a Storm Drain program. Sign up for the program and commit to clearing leaves and trash from it regularly. If you notice that the device beneath the grate has material in it, don’t try to remove the grate—call 311 and a Minneapolis Sewer Maintenance crew will come out to clean it.