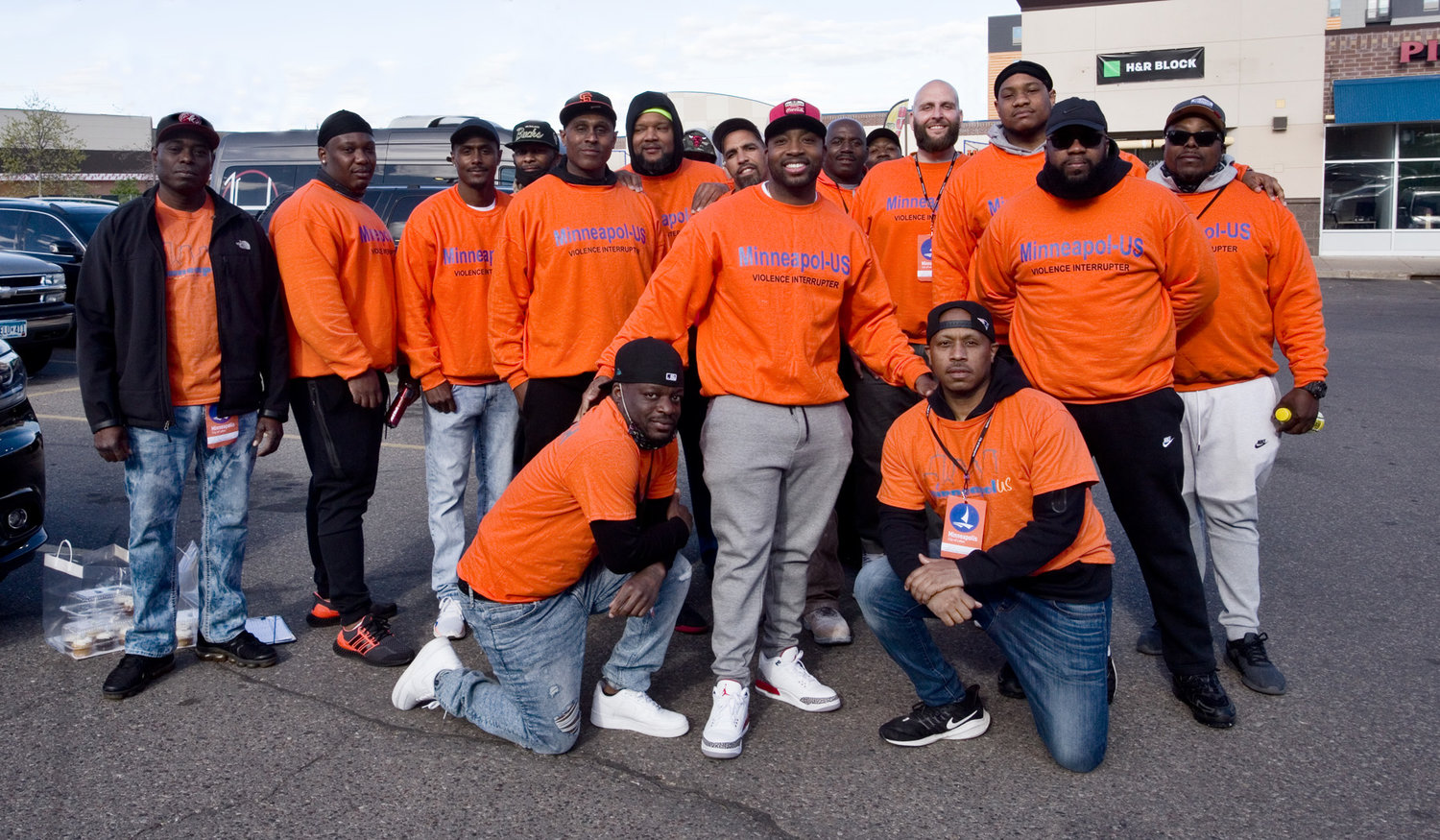 The T.O.U.C.H Outreach community patrol in the Aldi parking lot before heading out for the night. Team leader Muhammad Abdul-Ahad is pictured standing center. (Photo by Margie O’Loughlin) 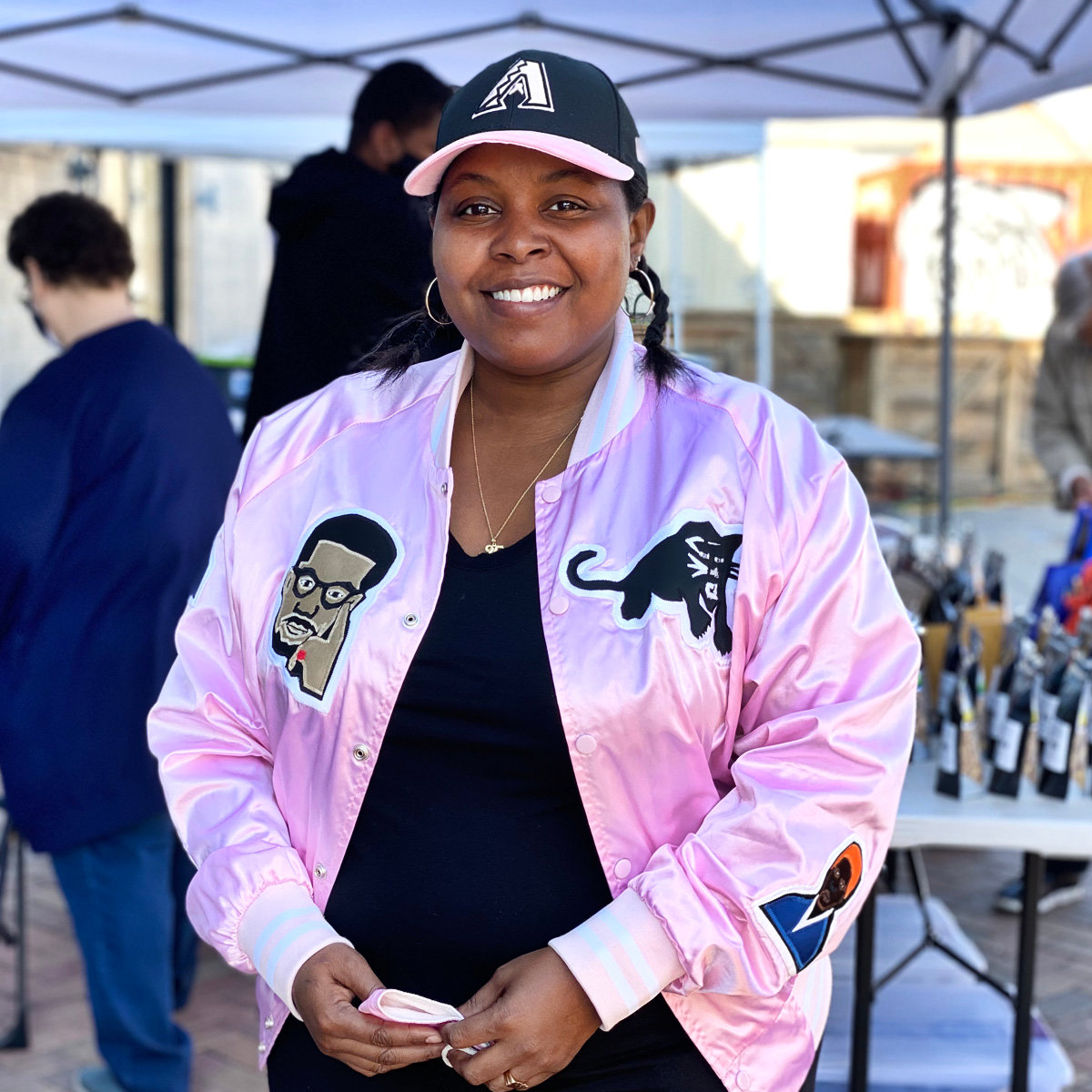 The Corcoran Neighborhood Organization is one of seven groups sharing a $1,000,000 pilot grant from the City of Minneapolis’ Office of Violence Prevention. The grant was awarded to neighborhood non-profits across the city to mobilize civilian community patrols as part of improving public safety. It runs through Dec. 31, 2021.
“Community patrols can provide support for people who are struggling, and direct them toward available resources. By building trust, community patrols are effective at de-escalating violence and stopping its spread,” said Alicia D. Smith, the executive director of the Corcoran Neighborhood Organization (CNO).

CNO and T.O.U.C.H. Outreach
CNO is partnering with T.O.U.C.H Outreach to provide a community patrol along Lake Street six nights/week from 5:30-11 p.m.
Smith said, “The full team of 20-25 meets in the west Aldi parking lot each night. They break into smaller groups and travel up and down Lake Street by train, bus, and on foot talking with community members and business owners. An engaged community typically has fewer problems than one that isn’t engaged. We are providing an alternative presence to law enforcement on the streets: we are community protecting community.”

Words, deeds, and actions
Muhammad Abdul-Ahad is the founder of T.O.U.C.H Outreach, which stands for Teaching Our Urban Community Hope.
He grew up in the Phillips neighborhood, and the streets he patrols with his team are very familiar to him. He believes that hope is the essential ingredient in helping people turn their lives around.
Abdul-Ahad sees the community patrol as a neutral buffer between community members and law enforcement. There are 32 patrol members on the roster right now; each one works 4-5 nights per week. They are trained in violence de-escalation, mediation, inter-personal communication, and Department of Justice-approved support and safety techniques. They are employees of the city of Minneapolis’ Office of Violence Prevention.
Abdul-Ahad said, “It’s no secret that Black and Brown people have a very negative feeling about the police. By contrast, we are a visible force of positivity out on the streets. You can’t miss us: we wear bright orange t-shirts to identify who we are. The t-shirts are also our ticket onto MTC-operated buses and trains.
“People we meet are so interested and they ask a ton of questions. We say we’re out here for public safety, community engagement, and violence interruption.
“For us, success is changing lives and sometimes saving lives. We demonstrate positivity through our words, deeds, and actions.”

A time like no other
Abdul-Ahab describes the members of his community patrol as super heroes. While the majority of the team is made up of men, there are a handful of women, too.
Sharesha (last name withheld by request), who joined in March, drives all the way from Plymouth to participate. She said, “I raised three sons to adulthood as a single mother. I joined the community patrol to reach out to kids who might be struggling – before they get caught up in the juvenile justice system. It’s important for them to know that people beyond their families care about them.
“When this time is finally over, I want to be able to say that I didn’t just sit back. I want to be able to say that I gave back.”
Abdul-Ahab expects the members of his team to practice self-care, as well as community care. He said, “I feel like everybody is suffering from PTSD right now. So many people have hit a breaking point, but it doesn’t help to keep it inside. We’ve got to talk about the stress that we’ve all been dealing with: the pandemic, the uprising, and whatever stuff we’ve got going on in our own lives.
“This is the first time that the city of Minneapolis has funded community patrols, and that makes me hopeful. Through our partnership with CNO, we’re bringing the credibility of our violence interruption strategy to the heart of Minneapolis.”
The six other groups that received funding from the Office of Violence Prevention are: A Mother’s Love, the Center for Multicultural Mediation, the Native American Community Development Institute, Change Equals Opportunity, Restoration Inc., and We Push for Peace.
The city’s objective for this pilot program is to fund outreach and support services during and after the trials of the four former police officers accused of murdering George Floyd. Community patrols are not intended to replace law enforcement, but to complement it. Residents are still encouraged to call 911 for emergencies that require an immediate response from police, firefighters, or paramedics.
The role of community patrols is to support behavior change for community members at risk for violence: to connect them with mental health and chemical dependency services, food, housing, jobs and other resources.
This is a new initiative. While there won’t be data on the effectiveness of Minneapolis community patrols until next year, similar strategies have shown positive impact in major cities across the country.