Neighbors who live around 27th and Lake St. are now finding themselves at the edge of a war zone of burned out and boarded buildings. Their commercial district encompasses the Third Precinct police station, the Minneapolis site that made national news when it was torched by rioters in the aftermath of George Floyd’s death.

This once thriving district, now the scene of so much devastation, has a rich history extending back to the final decades of the 19th century. During those early years, when Lake St. was a narrow dirt road beyond the Minneapolis city limits, a scattering of homes and businesses sprung up around a small industrial firm. Minneapolis Harvester Works, was established at the intersection of Lake and Hiawatha in 1882. A block away, the first known hotel in the area, Hotel Woodland, was built on 27th Ave. in 1901. The building later become the Schooner Bar, a 120-year-old landmark still standing in 2020, but badly damaged during the recent riots. 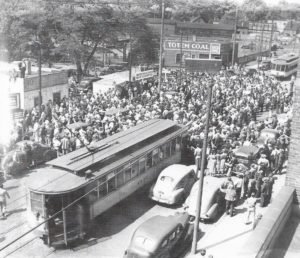 The Harvester Works firm was short lived. When the business failed, its site was taken over by another small industrial concern, Minneapolis Steel and Machinery, in 1902. Minneapolis Steel prospered, enlarging its production facilities to cover an expansive site extending from Hiawatha to Minnehaha Ave. between 28th St. and Lake. By 1930, now known as Minneapolis Moline, this South Minneapolis industrial firm, which manufactured farm machinery, had become one of the city’s largest employers. During World War II, retooled to produce U.S. army vehicles, Moline saw its workforce balloon to over 4,000. After VJ day, which marked the end of World War II, many of those workers found that they were suddenly jobless as Moline sharply cut back its wartime production.

Then, protesting the company’s layoff policies , disgruntled workers launched a strike and temporarily blocked traffic on Lake Street as a sign of protest. Their strike lasted for more than two months.

To the east of the Minneapolis Moline plant, two multi-story commercial buildings flanked the intersection of 27th and Lake. The oldest of the two was built for the International Order of the Oddfellow (IOOF) in 1909. The Oddfellows used the building’s second floor for their meeting rooms, while the J.O. Peterson Drug Store, the building’s longtime tenant, occupied the prime corner spot on the ground floor.

In a prelude to a more destructive conflagration 70 years later, a 1948 fire caused substantial damage to the Oddfellows’ building. Minneapolis firefighters fought the blaze for six hours before bringing it under control. The 1948 fire spared the building’s Town Talk Diner, a popular lunch spot for workers from the nearby Moline plant. But the diner fell on hard times starting in the 1970s. After it shuttered in 2002, Town Talk’s space remained empty until it reopened as an upscale eatery in 2006. Later owners retained the diner’s name and its distinctive lighted sign which had become a popular East Lake landmark. This year, the Town Talk’s life was cut short when the recent riots destroyed the Oddfellows Building, the Lake Street’s café’s home for more than 70 years. 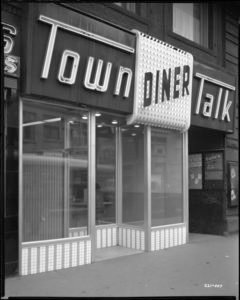 Across Lake from the Oddfellows, the 1917 Coliseum Building housed Freeman’s, at one point the city’s largest department store outside of downtown. The Lake St. store was a joint effort of its owner, E.B. Freeman and his wife, Harriet, who oversaw the store’s women’s department. Freeman’s Department Store flourished during the 1920s and held its own throughout the Great Depression. During those difficult years, many of the families who shopped at Freeman’s had breadwinners who held on to their jobs at Minneapolis Moline and at the Ford plant across the river in St. Paul. “They were Swedes and Norwegian who were thrifty by nature. They didn’t waste their money. And they kept coming to our store,” recalled E. B. Freeman’s son, Wallace.

Freeman’s survived the Great Depression and World War II but succumbed to the forces of suburbanization that battered inner city retailing in the post-war era. The Lake St. department store hung on until 1975 when it finally closed.

After Freeman’s closed, Roger Podany, a local businessman who owned a used office furniture business, purchased the Coliseum and put his own name on the front of the building. During the 1970s, Podany rented the building’s basement to up and coming musical groups including the well-known Suburbs. The Podany Building’s third floor ballroom served as the temporary home of the folk dance group, Tapestry.

The 1970s took its toll on nearby Minneapolis Moline after the farm implements manufacturer was sold to the Ohio-based White Motor Company. In 1972, White Motor closed the Lake Street Moline plant along with a second factory in Hopkins, putting 1200 Moline employees out of work. 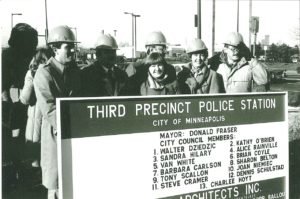 The closure of the Moline plant marked the end of 27th and Lake’s industrial era and the start of a new effort to reinvent the district a retail destination. Moline’s factory buildings were demolished and replaced with a suburban style shopping center anchored by a massive Target Store. The big-box Target, a major Lake St. anchor well into the 21st century, opened in 1976. A year later, the multi-tenanted Minnehaha Mall opened on an adjacent site. The new mall billed itself as the first indoor shopping center built in Minneapolis during the previous 15 years. The retail center’s suburban configuration, fronting on a large parking lot, would soon fall out of favor with urban planners who wanted to discourage auto uses and promote high density development. After retail faded away at the Minnehaha Mall, the building was reconditioned to serve as the home of the Minnesota Transitions Charter School.

In the mid 1980s, 27th and Lake underwent another wave of redevelopment when the block to the east of Target became the site of a Rainbow grocery store. The Rainbow replaced the Third Precinct police station which had occupied the site since the 1950s. When Rainbow closed in 2014, its space remained vacant until 2019 when the property was redeveloped for an ALDI Market.

In 1985, the Third Precinct moved into a new building at the southwest corner of Lake and Minnehaha. The new station featured a public entrance facing the corner, designed to be open and accessible to the public, according to the building’s architect.

The 2000s saw the redevelopment of the Podany Building with its original name restored, a major expansion of the nearby East Lake Library and the construction of the Midtown Greenway along the district’s northern edge at 27th St.

During the past decade, several community groups including the Lake Street Council, the Longfellow Community Council, and the Longfellow Business Association have worked to promote 27th and Lake’s revival. They were encouraged by the ethnic restaurants and the new Moon Palace book store that helped make their commercial district a neighborhood friendly” mini-downtown” for the adjacent Longfellow Community.

Now, those efforts have suffered a huge setback as a result of the recent riots that destroyed or damaged more than 30 area businesses and community facilities. The list includes Target, ALDI, the Coliseum, the Minnesota Transitions Charter School and the East Lake Library.

But one community leader is not deterred. “Many of our residents and businesses feel abandoned and afraid,” acknowledges Melanie Majors, the Longfellow Community Council’s Executive Director. “There has been an extreme and tangible threat to our community. I have been working for this community for 13 years and I know that the people here care and love their neighbors, their businesses and their community. We are being tested right now and while we are suffering an unprecedented amount of damage and destruction we will overcome this. While we have lost much, this does not change who we are. Longfellow will be rebuilt and it will be stronger than ever.”